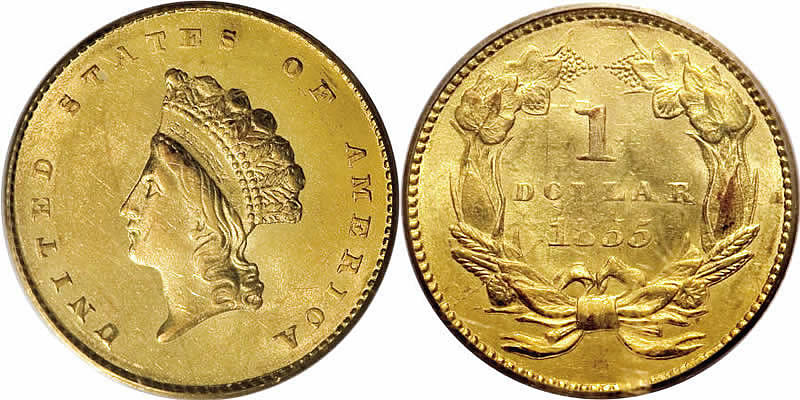 In the first 10 years after the California Gold rush began, some $600 million in gold was discovered in California as its population exploded from a minuscule 25,000 to more than half a million. The great rush wrought an overnight transformation in the future Golden State. Indeed, it was responsible for making California the nation's 31st state: The flood of Forty-Niners that descended on the region in 1849 opened the door to statehood the very next year. While much of America teetered on the brink of civil war, Californians were preoccupied with finding their personal fortune and staking a permanent claim to it.

The gold rush changed the face of U.S. coinage, as well. The massive amounts of gold emerging from California prompted Congress to authorize three new denominations - a gold dollar, a $3 gold piece and a double eagle, or $20 gold piece - between 1849 and 1854. In large part, these were intended to help convert the mountain of metal into a form more usable by the public. Double eagles, of course, accounted for the bulk of the coins made. Between 1850 and 1854, over eight million were struck.

The gold dollar and double eagle - the smallest and largest regular-issue gold coins in U.S. history - both had their genesis in the coinage act of March 3, 1849. And both were designed by James Barton Longacre, the U.S. Mint's chief sculptor-engraver.

Objections arose almost at once to the dollar's tiny size: At 13 millimeters in diameter, it was more than one-fourth smaller than today's Roosevelt dime, and critics complained that this made it easy to lose. Mint officials took these protests seriously, and over the next few years test strikes were made of a number of possible substitutes that were larger in diameter but compensated for this with center holes.

The process took a different turn in 1853, when James Ross Snowden became the new director of the Mint. Snowden agreed that the gold dollar should be larger, but instead of using a hole to keep the weight the same, he advocated making the coin somewhat thinner. He assigned Chief Engraver Longacre to make this modification and, at the same time, to come up with a new design.

Initially, the gold dollar had a head of Liberty much like the one on the double eagle. By 1854, when Snowden ordered the changes, Longacre had a new model available: He had just designed the $3 gold piece, and he patterned the new gold dollar after that. Its obverse features a left-facing portrait of a female figure wearing a fancy headdress. The female figure is frequently described as being an "Indian princess," and the coin is commonly known as the"Indian Head" type. His reverse design shows the date and denomination within a wreath of corn, cotton, wheat and tobacco. Renowned numismatic scholar Walter Breen argued persuasively, that the head Longacre used wasn't that of an Indian at all, but rather a copy of Venus Accroupie, or "Crouching Venus," a Roman marble figure then on display in a Philadelphia museum. Longacre had used this same head on the gold dollar and twenty of 1849; he would use it again on the Indian Head cent and the three-nickel, each time with a different headdress.

Being 15% larger in diameter, this Type 2 gold dollar was easier to keep track of - and less likely to get lost - than its predecessor had been. Unfortunately, however, it had a major shortcoming of its own: Longacre had made the relief on the obverse too high, and the overwhelming majority of the coins were less than fully struck as a result. Very few examples exhibit sharp details in the hair, the word Dollar and the date - and even the designer's initial L, located on the truncation of the bust, is often barely visible. Branch-mint issues are particularly weak. Key points to check for signs of wear include the hair over the eye and the bow knot at the base of the wreath.

Because of the striking difficulties, Longacre had to go back to the drawing board yet again, and the Type 2 dollar lasted only until 1856 before giving way to a Type 3. During its brief existence, barely 1.6 million Type 2 examples were produced, with the Philadelphia (no mintmark) issues of 1854 and 1855 accounting for the vast majority. The three Southern branch mints all made the coin in 1855, but outputs were extremely small at Dahlonega (D) and Charlotte (C), where mintages totaled just 1,811 and 9,803, respectively. New Orleans (O) minted 55,000 that year. The new branch in San Francisco (S) was the only mint to make this type in 1856. As on the other gold dollars, the mintmark appears below the wreath. Philadelphia struck five proofs in 1854 and less than fifteen in 1855. The proofs appear very infrequently, usually only when major collections are sold. An 1854 was in the 1979 Garrett sale, and 1855s were in the 1978 Bareford and 1982 Eliasberg sales.

Given its relief problems and its small total population, the Type 2 is exceptionally elusive in mint condition. It is rare in Mint State-65, and extremely rare above that level. A complete date and mint set of Type 2 gold dollars would consist of just six coins. But in view of the great rarity of the 1855-C and particularly the 1855-D, most people collect this as a type coin, acquiring only one high-grade specimen.

Breen estimates that less than 1% of the Type 2 dollar mintage still exists - in all grades. The coins wore down so quickly when exposed to circulation that within a few years, much of the total output had been rendered almost illegible. By then, gold dollars - like much of the nation's coinage - had all but stopped circulating anyway because of widespread hoarding during the Civil War.

California may have been the last major bastion of Type 2 gold dollars in commerce, since U.S. coins in general continued to circulate there throughout the war. If so, that would have been entirely fitting: California, after all, is where the gold came from in the first place.