The Lima mint had closed in 1588. For a brief period in 1659 and 1660 the mint reopened, but without Royal permission. Once King Philip IV found about it, he ordered its immediate closure. The mint remained closed until 1683 with coinage resuming in 1684.

The new viceroy, Alva de Liste, found there was a very serious and chronic problem due to the shortage of circulating currency. Potosi's annual 8 million in silver pesos went almost completely to Spain, and that mint was already overworked. There was not enough currency for local merchants to do business or pay taxes. Alva decided he needed to re-open the Lima mint first and ask permission later.

The mint re-opened in January 1659 and there was a substantial silver coinage that year. The records say about 2.1 million silver pesos. Mostly 8, but also 4 and 2 and 1, Reales were struck ( as you would expect, as it was to be circulating currency, not bullion for Spain ). There are quiet a few design varieties on the 1659 obverse.

This coin lets us see the word "LIMA" spelled out, not abbreviated as LM. Star with 8 points above LIMA. Dot between 8 and assayer's initial to the right of the pillars. Assayer V is believed to be Francisco Villegas, not Juan de Villages who struck silver coinage when the mint reopened in 1684. The total of known pieces including all varieties is about 40 coins, only this one has been offered for sale on this variety and quality from the wreck of La Consolacion, the rest are or land finds or mostly from the Jupiter wreck. 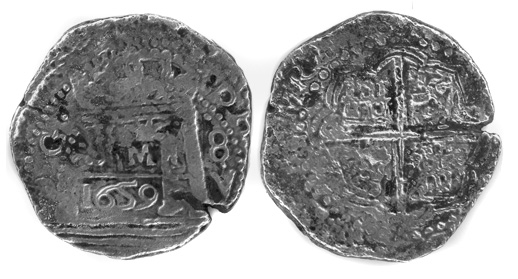