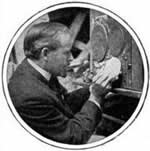 Born in Durmersheim, near Karlsruhe, Germany, Weinman arrived in the United States at the age of 14. At the age of 15, he attended evening classes at Cooper Union and later studied at the Art Students League of New York with sculptors Augustus Saint-Gaudens and Philip Martiny. He later served as an assistant to Charles Niehaus, Olin Warner, and Daniel Chester French. Weinman opened his own studio in 1904.[1] Although Weinman is now best remembered as a medalist, when he once was introduced as such he vehemently denied being one and said that he was an architectural sculptor.[2] His steadiest income was derived from the sale of small bronze reproductions of his larger works, such as Descending Night, originally commissioned for the Panama-Pacific International Exposition, San Francisco, 1915.

Weinman was a member of the National Sculpture Society and served as its president from 1927 to 1930. His work was also part of the sculpture event in the art competition at the 1928 Summer Olympics.[4] He served on the U.S. Commission of Fine Arts from 1929 to 1933.[5] He was also a member of the American Academy of Arts and Letters, the National Institute of Arts and Letters, the National Academy of Design, and the New York City Art Commission, among other organizations.

Weinman died in Port Chester, New York, on August 8, 1952. Following a mass at Manhattan's St. Patrick's Cathedral, he was buried at Calvary Cemetery in Queens. Weinman's papers are at the Smithsonian Archives of American Art.

Despite his objections, Weinman is still best remembered as the designer of the Walking Liberty Half Dollar (a design now used for the obverse of the American Silver Eagle one-ounce bullion coin) and the "Mercury" dime along with various medals for the Armed Services of the United States. Among these are the identical reverses of the Asiatic-Pacific Campaign Medal, the European-African-Middle Eastern Campaign Medal, and the American Campaign Medal. Weinman was one of many sculptors and artists who employed Audrey Munson as a model.

As an architectural sculptor, Weinman's work can be found on the Wisconsin, Missouri, and Louisiana state capitol buildings. He became the sculptor of choice for the architectural firm McKim, Mead, and White and designed sculpture for their Manhattan Municipal Building, Madison Square Presbyterian Church (demolished), Prison Ship Martyrs' Monument, and the since-demolished Pennsylvania Railroad Station, all in New York City. A photograph of one of his angels, Day, in a landfill in New Jersey is one of the saddest reminders of the destruction of Penn Station in 1963, but two of his eagles were retained as trophies outside the entrance to the new subterranean Penn Station.[6] Elsewhere he created the dramatic frieze on the Elks National Veterans Memorial in Chicago and executed sculpture for the Post Office Department Building, the Jefferson Memorial, and the interior of the U.S. Supreme Court, all in Washington, D.C.

Weinman was one of 250 sculptors who exhibited in the 3rd Sculpture International held at the Philadelphia Museum of Art in the summer of 1949.

Weinman's works are mostly executed in a lyrical neoclassical style. His figures typically wear classical drapery, but there is a fluidity found in his work that is a harbinger of the Art Deco style that was to follow him. His bronze statuette The Nude Golfer epitomizes this style. This work evokes classical sculpture in its attention to anatomy and movement and the nude status of the athlete while the subject, a modern golfer, provides a modern twist.

Weinman also taught; among his pupils was Eleanor Mary Mellon.