Joseph Wright - American Painter and US Mint Designer and Engraver 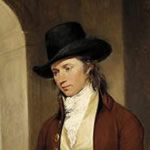 Joseph Wright (July 16, 1756 – September 13, 1793), born in Bordentown, New Jersey, was a portrait painter who was affiliated with the United States Mint in the late 1700s. It is thought that either he or Henry Voigt designed the Liberty Cap Cent, although most historians and numismatists today credit the design to Wright. He also presumably designed the 1792 Quarter dollar pattern. He was George Washington's original choice for the Chief Engraver of the Mint, but he died before being inducted into the position.

His mother, Patience Wright, often regarded as America's first sculptor, ran a wax modeling studio in New York City. In 1772, she moved to London to open a studio and waxworks there. Six years later, in 1775, Joseph, Jr. joined his mother in England and became the first American-born student to matriculate in the Royal Academy of Arts in London, where he studied for 6 years. He won a silver medal for "the best model of an Academy figure" in December 1778. In 1780, he caused a scandal at the Royal Academy by exhibiting a portrait of his mother sculpting a wax head of King Charles II, while busts of King George III and Queen Charlotte looked on.

In 1781, Wright and his mother traveled to Paris. While there, he painted several portraits of Benjamin Franklin. After 7 years in Europe, Wright returned to America in 1782, where he became the first of just two artists to make a plaster mold of George Washington. Thomas Jefferson judged Wright's portrait of Washington very highly. "I have no hesitation in pronouncing Wright's drawing to be a better likeness of the General than Peale's," he wrote in 1795.

Early in his Presidency, Washington and Secretary of State, Thomas Jefferson, diligently sought after talented European engravers to design the first United States coins. However, they failed in this endeavor and ultimately decided that Wright would become the unofficial Engraver at the nascent Philadelphia Mint in the second half of 1792. In August, 1793, Joseph was designated as the Mint's "First Draughtsman & Diesinker." Wright was responsible for the design of Liberty Cap designs on both the half and large cents. These designs were based upon the obverse of the Libertas Americana medal on which Wright is believed to have been the designer. Large Cent varieties of 1793 are his creations.

On December 5, 1789, Wright married Sarah Vandervoordt in Philadelphia. They had three children, Sarah, Joseph, and Harriet. Wright and his wife both died, most likely as a result of the Yellow Fever Epidemic of 1793.