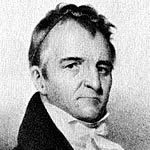 William Kneass was the second Chief Engraver of the United States Mint from 1824 until his death in 1840. Kneass is credited with designing the "Classic Head" motif, which appeared on numerous denominations of American currency, including the gold quarter eagle ($2.50) and half eagle ($5.00) gold pieces from 1834 to 1839. He also modified John Reich's "Capped Bust" design for use on the half dime through half-dollar from 1829 to 1837.

William Kneass was born September 25, 1780 in Lancaster, Pennsylvania. He served in the War of 1812 as a volunteer associate of the field engineers, and helped construct fortifications on the western front of Philadelphia. He ran an engraving office on Fourth above Chestnut Street, Philadelphia, which was a popular meeting place for "leading wits and men of culture". Kneass also worked as an engraver of plates for book work. Although he mainly worked in line engraving, he was also known for producing aquatints. He also worked in two other engraving firms that bore his name: Kneass & Dellaker, and Young & Kneass & Co.

Chief Engraver of the US Mint

On January 29, 1824, Kneass was appointed Chief Engraver of the United States Mint. During his tenure as Chief Engraver, he oversaw production of gold coinage, and circulating coinage.

In 1830, Kneass redesigned the quarter, and in 1834, redesigned the gold coinage. He also introduced a new Liberty head on the half dollar, a design that was modified several times over the next two years. In 1835 Mint director Samuel Moore wrote of him: "Mr. Kneass, our present engraver ... is an acceptable, popular and very useful Officer, perhaps one of the most rapid in execution in the U. States. I do not know whether another could be found, whose celerity in his profession could have sufficed to furnish all the dies we have necessarily employed within the last five years."

On August 27, 1835, Kneass suffered a debilitating stroke that left him paralyzed on his right side. Once second engraver Christian Gobrecht was hired, he did most pattern and die work until Kneass died in office on August 27, 1840. Kneass was succeeded by Gobrecht as Chief Engraver on December 21 of that year.

Kneass was married to Mary Turner Honeyman Kneass. One of their 6 children, Samuel Honeyman Kneass (1806–1858), was a notable civil engineer and architect, based in Philadelphia. Another, Strickland Kneass (1821–1884), was an engineer.

Kneass was remembered as "a warm gentleman of the old-school, who had the rare quality of engaging and winning the esteem and affection of children and youth"