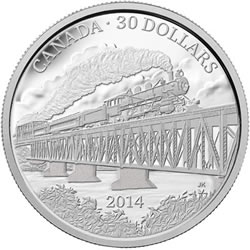 A century ago, the transcontinental railway enabled the settlement of western Canada. The Royal Canadian Mint commemorates the 100th anniversary of the completion of the Grand Trunk Pacific Railway—a massive early twentieth-century engineering feat that linked eastern Canada to the Pacific—with this rare 2-ounce 99.99% pure silver coin.

Design: Designed by Canadian artist Joel Kimmel, the coin features a dynamic portrait of a 1914-era steam train traversing the Grand Trunk Bridge in Saskatoon at the time of the railway's completion. In a striking composition that evokes the drive and energy of the early 20th century's theme of "progress," Kimmel presents a steam engine pulling elegant wooden passenger cars. With its wheel arrangement and vast steam engine bellowing a long cloud of smoke, the image is true to the locomotives of the Grand Trunk's construction era. The scene's vantage point on the foliage-lined shoreline and slightly below the left side of the train bridge enhances the drama and grandeur of the moment.

Directly from the
Royal Canadian Mint.

The items below are sorted by the lowest price/shipping total.