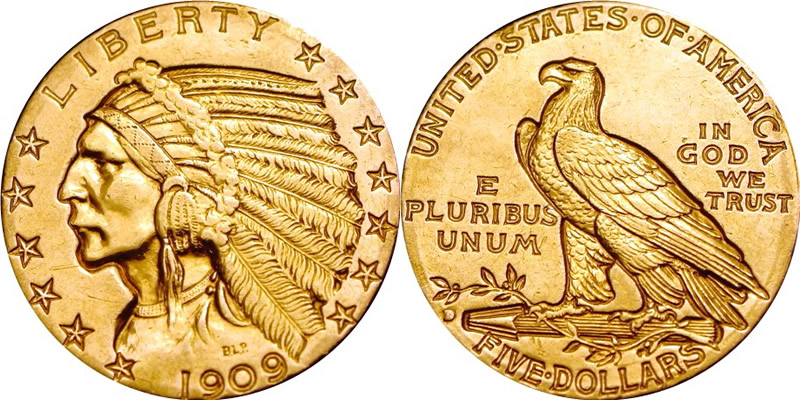 In January 1914, with Europe on the brink of war and the United States in the throes of a depression, Henry Ford announced that he was doubling his workers' pay from $2.34 per day to a princely $5 and, at the same time, reducing their nine-hour workday to eight hours. Ford Motor Company was, he said, initiating "the greatest revolution in the matter of rewards for its workers ever known to the industrial world."

Strange as it may seem in today's inflated economy, $5 per day was indeed a handsome wage in 1914, and what Ford did was every bit as revolutionary as he proclaimed.

Clearly then, the half eagle or $5 gold piece was a coin with considerable clout in 1914, even though it was only slightly larger than the then brand-new "Buffalo" nickel. After all, it represented a full day's pay for well-paid workers enough to buy a pair of trousers plus a pair of work boots.

The half eagles being minted that year had more in common with Buffalo nickels than size: Both carried portraits of realistic-looking American Indians. The Indian Head half eagle had made its first appearance in 1908, along with a quarter eagle (or $2.50 gold piece) of identical design.

In another respect, however, these Indian Head gold pieces are unlike any other coins produced before or since by Uncle Sam: Their relief is incuse. Simply stated, what this means is that their designs and inscriptions are sunken below the surface of the coins, rather than being raised.

This innovative technique was quite daring, for no other modern coins had ever used it. In normal times, in fact, the idea might well have been scrapped. But new ideas were welcome in national affairs in the early 1900s, thanks in large measure to one larger-than-life individual: President Theodore Roosevelt. The restless, dynamic Roosevelt took a personal interest in virtually all aspects of the American scene including the nation's coinage and left his personal imprint on many areas.

Roosevelt had persuaded the nation's foremost sculptor, Augustus Saint-Gaudens, to redesign the double eagle and eagle ($20 and $10 gold pieces) and had taken great pride when the two new coins debuted in 1907 to rave reviews. In 1908, he turned his attention to the two remaining gold coins, the half eagle and quarter eagle.

The idea of recessing the coins' features came from William Sturgis Bigelow, a Boston physician and art lover who happened to be a close friend of Roosevelt's. Bigelow had seen incuse relief in Egyptian art works at the Boston Museum of Fine Arts, and he piqued the president's interest with his notion of adapting this technique to U.S. coinage. With Roosevelt's blessing, he engaged a fellow Bostonian, noted sculptor Bela-Lyon Pratt, to prepare coinage models, and Pratt developed designs pairing an Indian brave on the obverse with an eagle in repose on the reverse.

The new coins must have bewildered many Americans when they first entered circulation near the end of 1908. Beyond their unusual relief, they also represented the first fundamental design change in the two denominations in nearly 70 years. Other than the addition of the words IN GOD WE TRUST in 1866, the previous half eagle, which carried a portrait of Liberty with a coronet in her hair, had been basically the same since its origin in 1839.

Consternation, not confusion, was what some people felt when they saw the coins. One of the loudest critics was Philadelphia coin dealer Samuel H. Chapman, who took issue with everything from the virility of the Indian (he described the portrait as "emaciated") to the health hazard posed by the "sunken design" (he predicted that this would make the coins "a great receptacle for dirt and conveyor of disease").

Critics such as Chapman were doomed to disappointment in their bid to derail the new coins, although they had an influential ally in the U.S. Mint's chief engraver, Charles Barber. Jealously defending his turf, Barber did make seemingly unneeded modifications in Pratt's designs, just as he had done earlier with Saint-Gaudens' models. But in the final analysis, Roosevelt's support was all that mattered.

Indian Head half eagles were issued annually from 1908 through 1916; in one year, 1909, four different mints produced them (branch-mint issues are denoted by a mint mark to the left of the fasces on the reverse). After 1916, production was suspended for 13 years; it then resumed for one last hurrah in 1929 at the Philadelphia Mint before the series ended for good in the face of the Great Depression. The 1929 half eagle is the big key in the series, worth several thousand dollars even in circulated grades. Records list its mintage as 662,000, but the vast majority apparently were melted. Other scarce dates include 1909-O, 1911-D and 1908-S, all with mintages under 100,000. Small numbers of matte proofs were made every year from 1908 through 1915.

Being recessed, the design elements on Indian Head half eagles are shielded from heavy wear. At the same time, this complicates grading since wear patterns differ from those of raised-relief coins. Critical areas for detecting wear are the Indian's cheekbone and headdress feathers and the shoulder of the eagle's left wing. Although these coins are plentiful in grades up to Mint State-64, they are quite elusive in MS-65, and very rare above that level.

Henry Ford probably wasn't thinking of the Indian Head half eagle when he instituted the $5 workday, yet the coin's career did seem to parallel Ford's: It came into being the same year as the Model-T, and it left the Mint's production line two years after the Model-T gave way to the Model-A.