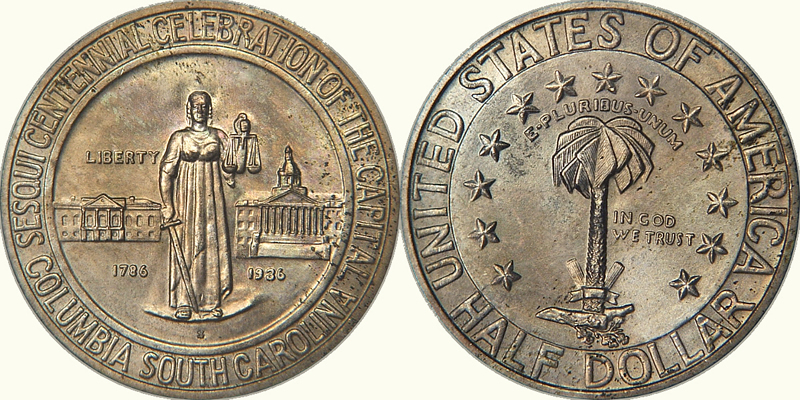 The Columbia, South Carolina half dollar occupies a unique place in the pageant of United States commemorative coins: Although the first issue to be authorized during that prolific year of 1936, it was the last to be distributed! This caused a near riot among coin collectors, who were already being subjected to one outrage after another at the hands of commemorative sponsors and promoters.

It all began innocently enough in the late winter of 1936 when a citizens' group of Columbia proposed an issue of coins to recognize the 150th anniversary of their city's founding as the state capital. This group, the Columbia Sesquicentennial Commission, then brought their proposal to Congress. The Act of March 18, 1936 authorized the coining of 25,000 half dollars "at the mints," a provision which allowed for the production of three-coin sets. This marketing ploy had been used by other coin sponsors as a means of increasing revenues, but at least the Columbia half was limited by law to only one date. It's regrettable that they didn't initiate their campaign sooner, however, as the sesquicentennial celebration was held March 22-29, 1936, commencing less than a week after the passage of their coin bill. Obviously, no halves would be on sale for the fairgoers!

The city of Columbia was founded in 1786 alongside the Congaree River, near Friday's Ferry. Its site in the central part of the state was chosen as a deliberate alternative to the previous capital at Charleston, which was considered vulnerable to assault from the sea and too far from the agricultural lands which were the basis of South Carolina's prosperity. The first State House built within the newly-laid city welcomed its opening session of the state legislature in 1790. By the time of the Civil War, a third State House was under construction, and both of these buildings appear on the obverse of the Columbia half.

Another important historical element depicted on these coins is the palmetto tree. The logs of this tree formed the walls of Fort Moultrie in Charleston's harbor, and they successfully repulsed the guns of Britain's navy during the War of Independence. This victory of South Carolina's native palmetto over the oaken timbers of King George's ships is symbolized on the reverse of the Columbia half - a distinctive palmetto towering over a broken limb of oak.

To prepare models for its commemorative half dollar the Sesquicentennial Commission selected 32-year-old A Wolfe Davidson, a sculptor at Columbia's Clemson College. On May 25, 1936, Davidson's models were forwarded to the Federal Commission of Fine Arts by Mint Director Nellie Tayloe Ross, who confessed her misgivings about them in a letter to Chairman Charles Moore. It seems that her assessment of their merit was correct, as the Commission disapproved the models and recommended Davidson's replacement with a more experienced and competent medallist. The Sesquicentennial Commission must have been adamant in its choice, as a deal was ultimately worked out in which Davidson would revise his models under the guidance of the Fine Arts Commission's sculptor member, Lee Lawrie. This arrangement was successful, as the new models were far more attractive and were ultimately approved by the Fine Arts Commission on July 22, 1936.

The obverse of the Columbia half features a standing, facing figure of Justice, flanked at left by the Old State House of 1790 and at right by the New State House built between 1855 and 1907. Below these in small numerals are the dates 1786 and 1936, respectively. Also in small letters, the motto LIBERTY appears above the Old State House. Arranged in arcs around the periphery, within an inner and outer border, are the inscriptions SESQUI CENTENNIAL CELEBRATION OF THE CAPITAL and COLUMBIA SOUTH CAROLINA. On coins struck at Denver or San Francisco, the mintmarks D and S, respectively, are found below the figure of Justice. The reverse of the Columbia half is dominated by the state's symbol, the palmetto tree. The significance of it and the oak branch which lies at its base are described above. Arranged in arc form within an inner border are 13 stars, indicating that South Carolina was among the original 13 colonies and states. Above the tree is E PLURIBUS UNUM, to its right IN GOD WE TRUST, both mottoes required by law. The legends UNITED STATES OF AMERICA and HALF DOLLAR are arranged peripherally between the inner and outer borders. No initials are present to identify the coin's designer.

With so many commemorative coins authorized for 1936, the Mint's engraving department was taxed to its limit, and the Columbia issue had to wait its turn. When dies were finally prepared, the Philadelphia Mint struck 9,000 pieces, while Denver and San Francisco each coined 8,000. An additional 23 examples were coined between them, but these were reserved for the Assay Commission and ultimately destroyed.

It was not until mid-October that all of the coins were struck, Denver being tardy in delivering the last 700 pieces of its allotment. In the meantime, the Commission had been taking orders for this limited-issue commemorative, and it was now oversubscribed by some 15,000 coins. This figure is believed to include many multi-coin orders placed by dealers. In an effort to distribute the halves as equitably as possible, the Commission withheld their delivery to buyers until all single-coin orders could be counted. This took several weeks, and the restless purchasers, some of whom had sent in their payment months earlier, were becoming quite vocal in their complaints. It wasn't until the second week of December that the Columbia halves began turning up in mail boxes around the country. The entire coinage was distributed in the weeks that followed, with no large orders being fulfilled and with no unsold remainder. Speculators were shut out of this issue, with the result that the coins were widely dispersed from the outset, and no large quantities have ever turned up in the after market.

Columbia halves seem to have been coined and handled with greater care than many commemorative issues, and most seen today reflect this privileged treatment. Examples grading as high as MS-66 are plentiful, although their numbers drop off sharply in higher grades. A few of the early strikes will possess semi-prooflike surfaces, but more typical is satiny luster, ranging from brilliant to dull. Fine, raised lines on coins of this type are from polishing of the dies. While they don't affect a specimen's grade, they may be distracting to the eye. Columbia halves are rarely encountered with actual wear, although a number have been impaired through harsh cleaning or may show light abrasions on their highest points. Check for metal loss on Justice's breasts and the top of the palmetto.

Columbia halves were distributed to local residents at $2 per coin, while mail orders were filled at $2.15 per coin or $6.45 for the three-coin set, postpaid. Presumably, single-coin orders were filled with the 1,000 extra P-Mint halves. The three-coin sets were delivered in a cardboard holder imprinted 1786-1936 HALF DOLLAR COMMEMORATING THE SESQUICENTENNIAL OF THE FOUNDING OF COLUMBIA AS THE CAPITAL OF SOUTH CAROLINA. This was then placed within an envelope bearing a reproduction of the coin's obverse.

Six sets were placed in a time capsule that was opened 50 years later in 1986. These historic sets were offered at several thousand dollars each. Another set was presented to President Franklin D. Roosevelt on February 15, 1937 by Columbia Mayor Owen, Sesquicentennial Commission Chairman James H. Hammond and South Carolina Senator Jimmy Burns.