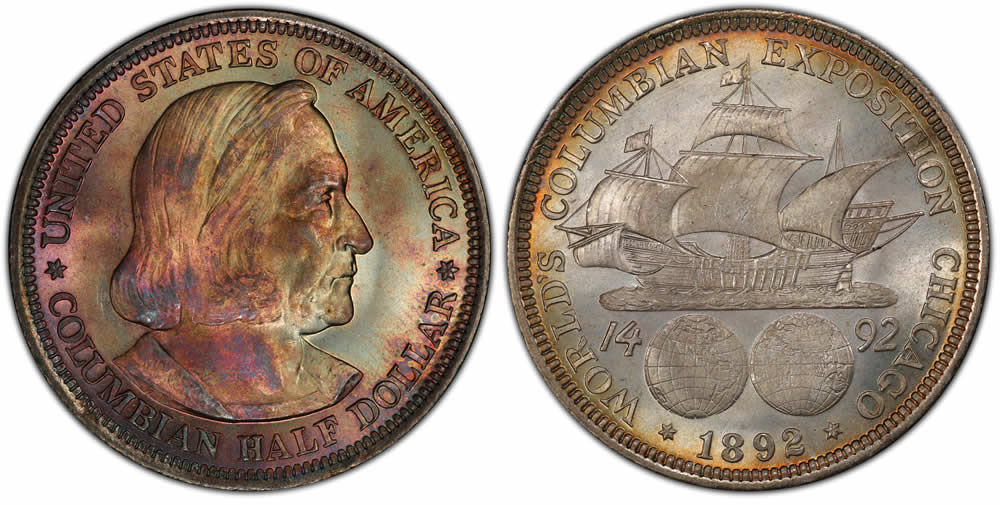 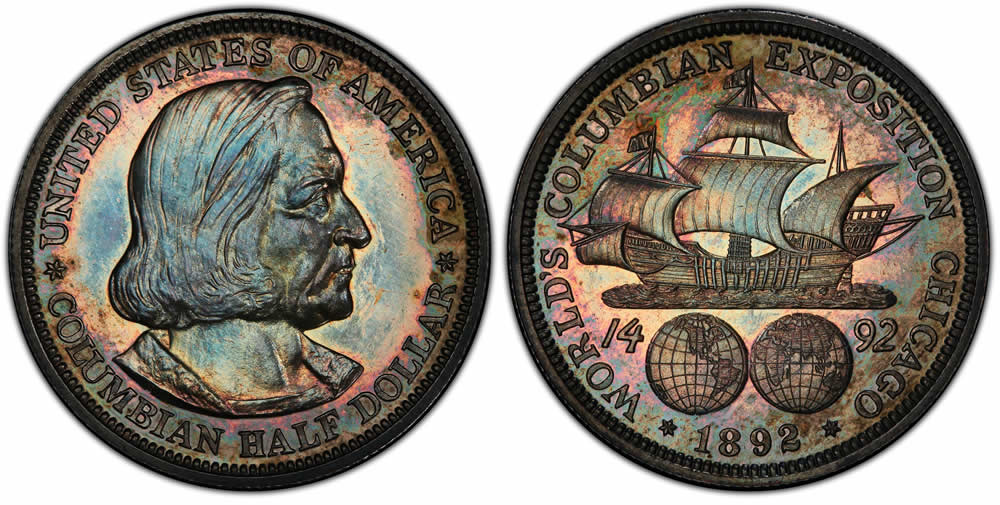 While Americans of the 21st Century squabble over whether Columbus was a hero or a cruel exploiter of indigenous people, such was not the case in 1892, on the 400th anniversary of Columbus' first voyage to the New World. At that time, American flags waived nationwide as the anniversary day of October 12 approached. Although Christopher Columbus was an Italian sailing in the service of Spain who never set foot on what is now the continental United States, Americans nevertheless claimed him as their own. Among the observances planned for this event was a great world's fair to be held in Chicago that year. Construction delays caused the opening of this exposition to be postponed until 1893. Nearly lost among the countless souvenirs for sale at the fair were commemorative half dollars dated 1892 or 1893 that celebrated the man and his discovery.

Columbus' quest was to locate a westward passage to the Orient by sea. The value of such a find was immeasurable, as only Asia possessed the strong spices that enabled Europeans to preserve their food for long-term storage and to bear eating it when their efforts at preservation failed. With his three ships and 89 crewmen, Columbus left the seaport of Palos, Spain on August 3, 1492, finally reaching land on October 12. As he had originally estimated the distance to Asia at just 2,400 nautical miles (it's actually more than 10,000), he may be forgiven for initially believing that he had landed in the East Indies. Three more voyages made between 1493 and 1504 included exploration of additional islands and the governorship of Santo Domingo. A rebellion there amid stories of abuse and corruption led to his ultimate downfall, and he died in 1506 still attempting to regain his privileges.

The World's Columbian Exposition, as the great fair would be called, was organized on April 9, 1890. On the 25th, Congress awarded the burgeoning city of Chicago the honor of hosting this event in 1892, beating out New York City, St. Louis and Washington, D.C. The Windy City selected an undeveloped lakefront property of 686 acres on which to build the exposition's landscape and structures. Today known as Jackson Park, this site overlooks vast Lake Michigan. Dedication of the grounds occurred on October 12, 1892, by which time it was obvious that the fair wouldn't open until the following year. It debuted amid much hoopla on May 1, 1893, with President of the United States Grover Cleveland doing the honors. Unquestionably the greatest world's fair held to that time, some 25,000,000 visitors passed through its gates before they were closed in the Fall and the buildings demolished. An unprecedented display of art objects were on exhibit, many of them commissioned specifically for the fair, and this prompted renowned sculptor Augustus Saint-Gaudens to remark "Do you realize that this is the greatest meeting of artists since the fifteenth century?"

To celebrate Columbus' discovery and the exposition itself, a bill was passed on August 5, 1892 which authorized the coining of not more than 5,000,000 commemorative half dollars . These coins were to be designed by sculptor U.S.J. Dunbar, who prepared a plaster model of the Columbus obverse based on a 1512 portrait painted by Lorenzo Lotto. As he would so often whenever outside artists were commissioned to design coins and medals, the U. S. Mint's Chief Engraver Charles Barber managed to derail the Dunbar train and secure the project for himself. Barber's portrait of Columbus was allegedly based on Olin L. Warner's bust of the navigator which now resides in the Chicago Historical Society. This in turn had several European antecedents. None can be considered an accurate depiction of Columbus, as there are no known portraits of him made from life. Irascible as always, Barber clashed with the Exposition's Board of Managers over the reverse, as well. He favored his own concept of the Western Hemisphere covering the entire reverse, but the Board was pressing for a depiction of Columbus' flag ship Santa Maria poised over two hemispheres representing both Old and New Worlds. Proclaiming their design uncoinable, he retreated from further involvement with the half dollar's reverse, instead delegating it to Assistant Engraver George T. Morgan. From that point onward, the work proceeded quickly. The first coins were struck on November 19, 1892, bearing that year of coinage. Additional pieces were minted later with the date 1893.

The World's Columbian Exposition half dollar depicts on its obverse a right-facing portrait of Columbus. Barber's initial B is at the truncation of the bust. Around the periphery, separated by stars, are the legends UNITED STATES OF AMERICA and COLUMBIAN HALF DOLLAR. The reverse features a port view of the Santa Maria, based on a replica commissioned by Spain. Below are two hemispheres flanked by the date 14 92. The actual date of coinage appears below, either 1892 or 1893. Separated from it by stars is the peripheral inscription WORLD'S COLUMBIAN EXPOSITION CHICAGO. Morgan's initial is cleverly hidden within the rigging of the ship, at the lower right of the mainsail.

The coins were almost universally panned by both the press and the numismatic community. Columbus was said to resemble either Daniel Webster, Henry Ward Beecher or William Gladstone. The reverse in particular became the butt of jokes about the "ship on wheels." It seemed that nearly everyone had an opinion of some sort, the value of which varied widely. This set a precedent for many commemoratives to come.

The mintage for 1892 was 950,000 pieces. This figure includes 103 coins struck in brilliant proof and an unknown quantity of assay coins. All were apparently distributed, and it's not known whether the assay coins were actually melted. Some 4,052,105 half dollars were coined with the date 1893, including 2,105 reserved for assay and presumably destroyed. With all of the competing souvenirs offered during that depression year, sales at the price of one dollar apiece were less than stellar, and a total of 2,501,700 coins dated 1893 were returned for melting. The net mintage of 1,548,300 includes many coins which were being held by banks as security against loans made to the Exposition. When the sponsors of the fair were unable to repay these loans, the coins were released into general circulation around 1895. Halves dated 1892 and 1893 were apparently dumped, as both are common in well-worn condition. This was not to be the last time that commemorative coins ended up in circulation because of poor sales.

The first 1892 Columbian half dollar coined was sold to the Remington Typewriter Company for $10,000. This publicity stunt received broad coverage. The remainder of the first one hundred coins were, like this one, brilliant proofs. These were not sold to the public, but rather were presented to various dignitaries and officials of the exposition. Also coined as proofs were the 400th, 1492nd and 1892nd pieces made, a practice repeated with the Isabella quarter coined for this fair. All proofs are very rare today and are seldom offered for sale. Some regular strikes have prooflike qualities, and while these may bring a premium for their attractiveness, they are not to be confused with true proofs.

Columbian half dollars of either date are readily available in circulated grades and may also be found in grades MS-60 through MS-63. Coins in MS-64 and above are quite elusive, as many examples of this issue were sold to the general public rather than to numismatists who cared for them properly. The first points to show wear are Columbus' eyebrow, cheek and the hair behind his forehead and jaw. On the reverse, check the foresail and mainsail, as well as the right side of the Eastern Hemisphere.