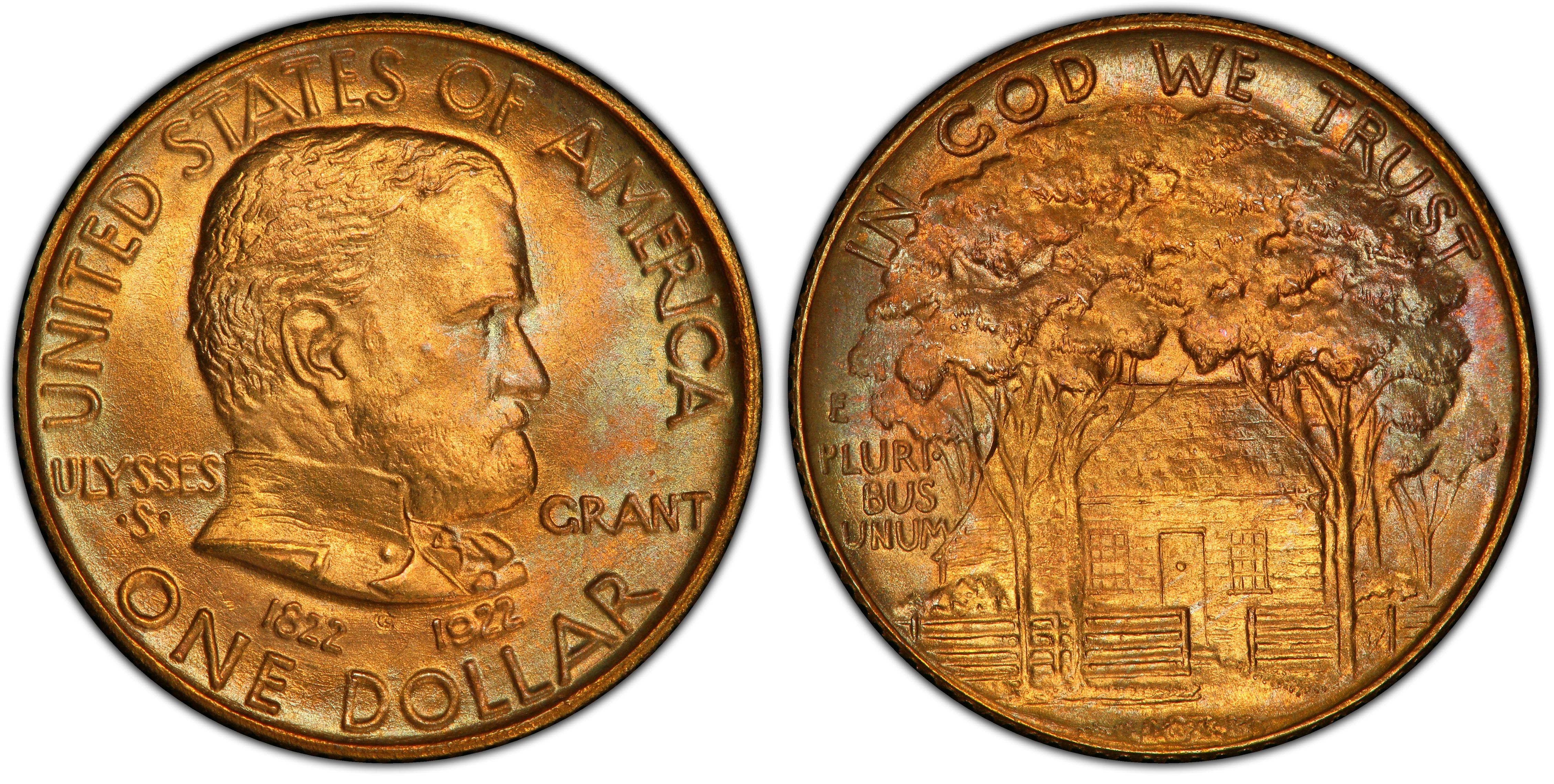 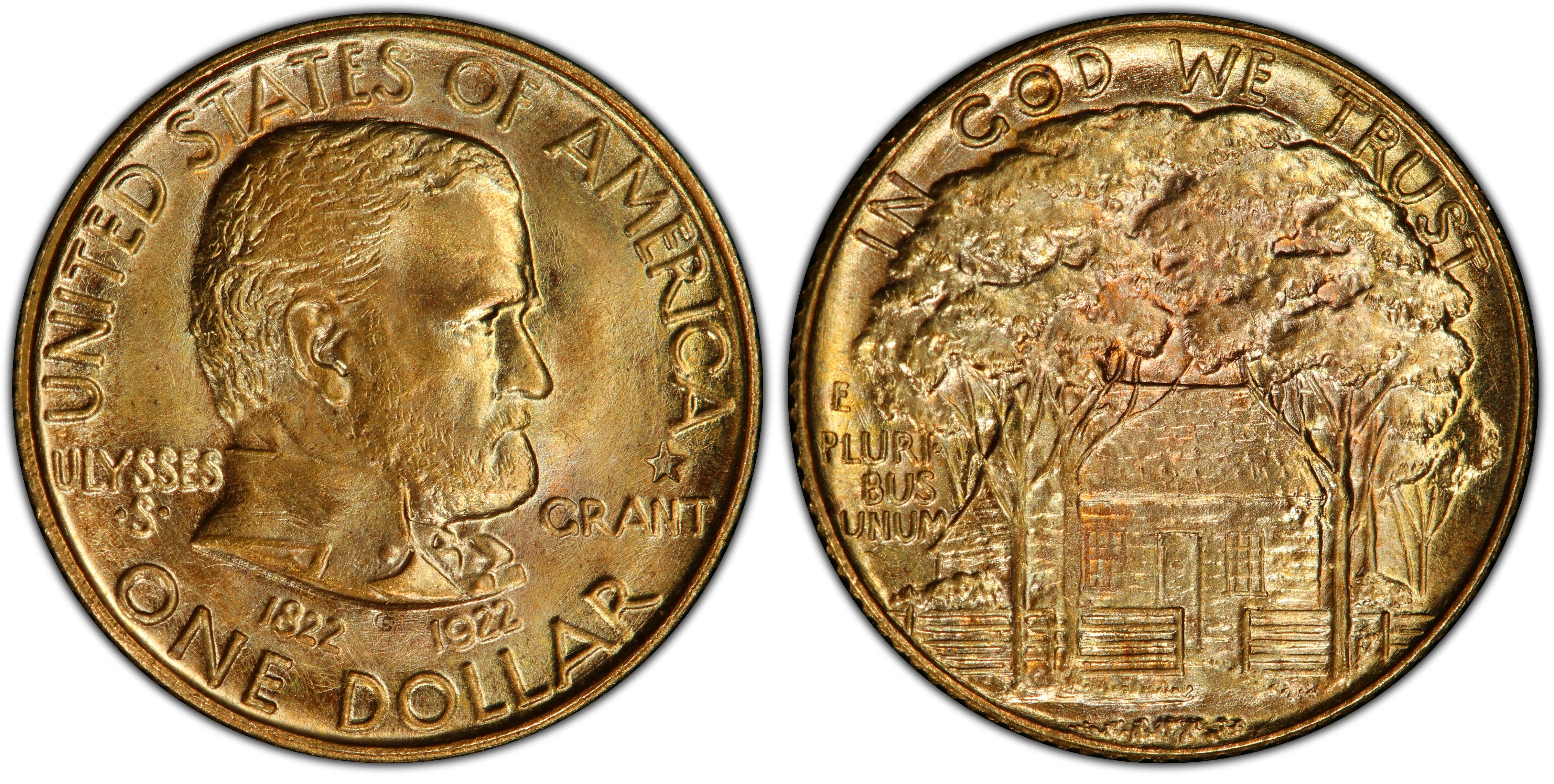 If one commemorative coin is good, then two coins are twice as good - or so the reasoning goes with these often exploited issues. The Grant Memorial gold dollar is a good example of this principle at work. The backers of this issue noted the success of the Alabama and Missouri programs in selling the same coin twice by offering two slightly differing varieties, and they decided to do likewise. In approaching Congress with a proposal for a commemorative gold dollar marking the centennial of Ulysses S. Grant's birth, they intended that it be coined both with and without a single star in the field. Congress approved this plan, and the two varieties of gold dollars (unlike their companion half dollars) did achieve a sellout, although many were apparently wholesaled to dealers. Collectors may have criticized such tactics at the time, but the passing years have seen both varieties of this coin multiply in value many fold; now they are among the most highly sought of U.S. commemoratives.

Ulysses Simpson Grant was not destined for greatness, or so it seemed in his early years. Born in Point Pleasant, Ohio on April 27, 1822, young Grant graduated from West Point Military Academy and served with little distinction in the Mexican War of 1846-48. Resigning from the army in 1854, Grant, now married, entered the business world in a succession of enterprises, all of them failures. When the guns were fired at Fort Sumter in 1861, Grant the veteran was commissioned a colonel in an Illinois regiment. The struggle between North and South would change his life, as it changed the nation's future. Numismatic author Arlie Slabaugh expressed it well in his book United States Commemorative Coinage: "The thing that Grant really was a success at was the Civil War." His series of victories in battles along the Tennessee and Cumberland Rivers brought him to the attention of President Abraham Lincoln, who was forever frustrated with the incompetent or overly cautious commanders who had been leading the federal armies since the outbreak of war. In Grant, he saw the fierceness and perseverance that was needed to achieve victory. Assuming command early in 1864, Ulysses S. Grant pushed his officers and troops to their very limits, but the strategy worked. The Confederacy collapsed following Robert E. Lee's surrender to Grant in April of 1865. The victory was a bittersweet one, however, as President Lincoln was assassinated shortly afterward.

His successor, Vice-President Andrew Johnson, a Democrat, proved too sympathetic to the South to satisfy the Republican Party and was nearly removed from office. Sensing a sure winner, the party ran war hero U.S. Grant for the presidency in 1868, and he indeed won. A great military leader, Grant was politically naive, and his administration was rocked by scandal and vast corruption. After two terms in office, the weary soldier retired to family life, although remaining an enormously celebrated figure. He died at home in 1885, passing into American legend.

Unlike many commemorative coins, which were the subject of seemingly endless debate and revision, the Grant Memorial gold dollar made it to the coin press with relatively little conflict. Of course, it helped that the sculptor member of the Fine Arts Commission, James Earle Fraser of Buffalo nickel fame, assigned the task to his wife, Laura Gardin Fraser. Mrs. Fraser was the creator of many commemorative coin designs, more so than any other artist save for the Mint's own Charles Barber. She worked from sketches submitted by the Centenary Memorial Association depicting a bust of Grant for the obverse and his Point Pleasant birthplace for the reverse.

The Association originally requested that the coinage consist of 200,000 gold dollars alone, with no mention of half dollars. It was the Senate's Committee on Banking and Currency that countered with a proposal for 10,000 gold dollars and 250,000 half dollars, reluctant "to sequester so much gold." In this form, the bill became law on February 2, 1922. Although the proceeds were intended to offset the cost of erecting monuments at Georgetown and Bethel, Ohio and to pay for a highway between New Richmond and Point Pleasant, the monuments were apparently never built. Where all the money went is unknown.

The Grant Memorial dollar shows on its obverse a right-facing portrait of Ulysses S. Grant adapted from a photograph by Matthew Brady. His name appears in two parts at either side of the bust. The commemorative dates 1822 and 1922 are below. Around the obverse periphery are the legend UNITED STATES OF AMERICA and the value ONE DOLLAR. Fraser's monogrammed LGF is scarcely visible in low relief below the bust and between the dates. The reverse depicts Grant's Point Pleasant birthplace home, as it looked before a restoration undertaken for the centennial. It's framed by a rail fence and partially covered by two stands of trees. The motto IN GOD WE TRUST appears above around the periphery, while E PLURIBUS UNUM is crowded into four lines at far left.

As it wanted to achieve a sellout of the more profitable gold dollars, the Association asked that a small star be placed in the obverse field on half of the 10,000 pieces coined, thus creating a second version needed by collectors. The star variety was priced at $3.50, the plain at $3. Despite the exploitative nature of this marketing, both issues indeed sold out. To its surprise, the Association received a bonus with the delivery of the half dollars: 5,000 of these likewise had a star in the field, a feature it had not requested but one which would enhance its sales. Even though no additional premium was charged for the half dollars with star, collectors were quite vocal in their opposition to being offered four varieties of essentially the same commemorative design. In addition to the 10,000 gold dollars coined at the Philadelphia Mint in March of 1922, 16 pieces were reserved for assay and later destroyed. A single proof example of the gold dollar with star is rumored to exist, and several trial strikings in white metal and brass are known.

Scarce due to their low mintage, Grant Memorial dollars have a high proportion of choice survivors. This is about equally divided between both varieties. Their survival in pristine condition was no doubt helped by the fact that B. Max Mehl and other dealers bought a very large portion of the original mintage from the distributor, probably at prices well below those advertised when the coins were first offered to the public. Gems grading MS-64 and MS-65 are available with some frequency, and even coins in MS-66 and MS-67 exist for the well-heeled buyer. Wear, although uncommon, will first appear on Grant's cheekbone and on the leaves below letter U in TRUST. Frequently seen are coins which have been cleaned and show hairline scratches.

Although grade is clearly not a problem for this issue, counterfeit coins are. Most of these are sand cast examples of mediocre quality, but the value of genuine coins will continue to make this issue the target of ever-improving technology. The equality of mintage between with-star and no-star varieties, however, has spared the gold dollar from suffering the fate of many halves, that is, the addition of fake stars to plain coins.