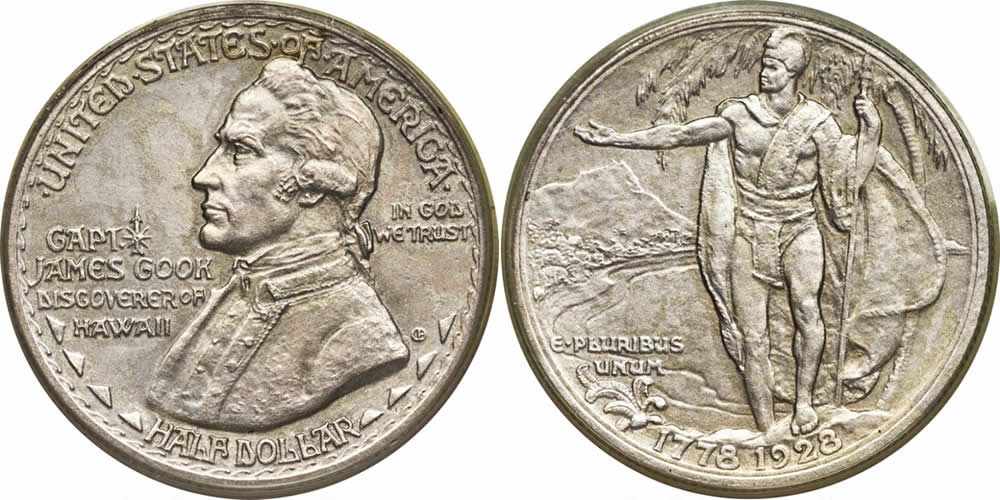 Luxury hotels along Waikiki Beach . . . island-hopping helicopters filled with smiling tourists . . . snorkelers and surfers enjoying the blue Pacific. These are among the images that come to mind when most people think of Hawaii. But Captain James Cook found quite a different place when the famed British navigator chanced upon the islands in 1778 on a voyage across the Pacific. From a European standpoint, Hawaii was "uncivilized" at that time. The beauty that Cook beheld on January 20, 1778, when he made his first landing at Kauai Island's Waimea Bay, was raw and unspoiled by Western civilization. Thereafter, however, the history of Hawaii would be forever altered by the encounter. Cook would be acclaimed as "discoverer" of the lush island chain, which he named the Sandwich Islands in honor of his patron, the Earl of Sandwich.

By 1928, the 150th anniversary of Cook's visit, the islands' history had undergone many twists and turns, taking them through periods of British domination, nominal independence and, at length, annexation in 1898 as a territory of the United States. The people of Hawaii were keenly aware, however, of the British explorer's role in altering the direction of that history, and they therefore made plans for a series of special events to mark the sesquicentennial of his arrival. As part of that celebration, they sought approval for the issuance of a U.S. commemorative coin whose sale would raise revenue to help form a collection of Cook memorabilia in the territory's archives. That coin, the 1928 Hawaiian Sesquicentennial half dollar, turned out to be one of the rarest and most valuable of all U.S. commemorative issues.

Authorizing legislation was introduced in Congress on December 5, 1927, by Commander Victor S. K. Houston, the territory's delegate to that body. He seems to have been exceptionally confident of its passage, for more than a month earlier, on November 2, 1927, he had submitted preliminary design sketches to the federal Fine Arts Commission. His confidence was justified, however, for on March 7, 1928, Congress approved the coin.

The design was fashioned by Juliette Mae Fraser, a well-known Honolulu artist. Coinage models were then prepared by prominent sculptor-medallist Chester Beach, himself the designer of two earlier U.S. commemoratives, the 1923 Monroe Doctrine Centennial and 1925 Lexington-Concord Sesquicentennial half dollars. The obverse features a left-facing bust of Cook based on a cameo portrait crafted by his noted contemporary, Josiah Wedgwood. This belonged to Bruce Cartwright Jr., a prominent numismatist who headed the Hawaiian coin's distribution commission. To Cook's left are the words CAPT. JAMES COOK DISCOVERER OF HAWAII, along with a tiny compass pointing north, signifying that he was looking due west toward the mid-Pacific region. Two statutory inscriptions, UNITED STATES OF AMERICA and IN GOD WE TRUST, appear at the top and right-hand side, respectively. The value HALF DOLLAR hugs the lower rim, with eight small pyramids - four to each side - representing Hawaii's eight largest volcanic islands: Oahu, Hawaii, Niihau, Kauai, Molokai, Lanai, Kahoolawe and Maui. The design's subtle symbolism extends to such details as the flowing lettering and wavy inner border, both of which are meant to suggest the sea. Chester Beach's initials CB can be found within a circle behind Cook's left shoulder.

The coin's reverse depicts a native warrior chieftain attaining the top of a hill, a metaphor for Hawaii's rise from obscurity. He is clad in a feather cloak and holds a barbed spear. His hand is extended in welcome, showing that his (and the islands') intentions are peaceful. A coconut tree behind him denotes romance, while the landscape in the distance represents part of Waikiki Beach (long before the luxury hotels), with Diamond Head looking down on a row of grass huts. This is meant to signify history and antiquity. The motto E PLURIBUS UNUM is at the lower left, and the dual dates 1778-1928 are along the base, again in wavy characters symbolic of the sea.

In 1928, the worst abuses still lay ahead for U.S. commemorative coinage; those would not reach flood tide until the 1930s. Problems were already becoming apparent, though. In drawing up plans for the new Hawaiian coin, the sponsoring organization, the Captain Cook Sesquicentennial Commission, made a genuine effort to avoid some of the pitfalls that had plagued earlier programs, including overproduction and inequitable distribution.

The mintage limit of 10,000 pieces was far lower than that of any previous silver coin in the series. It's true that three earlier silver issues - the Missouri, Alabama and Grant half dollars - included coins with special symbols made in even smaller quantities. Those coins, however (the Grant half dollar with star is an example), were artificial rarities created to stimulate bonus sales. The Hawaiian half dollar employed no such gimmicks and was genuinely scarce right from the outset.

Production actually totaled 10,008, the extra eight pieces being set aside for assay purposes. Fifty of these were sandblast proofs, made by a special process that gave them a dull, grainy look. Another 400 pieces, regular business-strike examples, were kept for presentation to various dignitaries, including distinguished guests at ceremonies marking the sesquicentennial.

The coins were struck in June, 1928 at the Philadelphia Mint from dies produced privately by Medallic Art Company of New York City. The site selection was somewhat surprising, since commemoratives related to the West and the Pacific had usually been minted in San Francisco. The coins went on sale October 8 of that year under the supervision of the Bank of Hawaii, Ltd., with a $2 issue price, the highest of any U.S. commemorative up to that time. Undeterred by the cost, buyers soon snapped up the limited supply, and the coins rose in value above their issue level almost at once. Plans called for selling half the coins on the islands and half on the mainland, but in practice most went to buyers in Hawaii.

Over the years, Hawaiian Sesquicentennial half dollars have come to be highly coveted by collectors and have earned a place of honor among the elite of U.S. commemoratives. They are especially scarce in MS or Proof 65 and higher and are all but unattainable above the level of MS or Proof 66. Points that first show wear include Cook's hair and cheek and the legs of the island chieftain.

Hawaii's future looked promising in 1928. It has had some anxious moments since then, especially during World War II, when the Pearl Harbor naval base in Honolulu's harbor served as the flash point for American involvement in the conflict. But, on the whole, the intervening years have seen that promise fulfilled. On August 21, 1959, Hawaii completed its rise from obscurity by joining the Union as Uncle Sam's 50th state. Fate was less kind to James Cook. Though hailed at first by the islanders as the white god Lona, Cook ultimately wore out his welcome. On February 14, 1779, less than 13 months after his arrival, he was killed by hostile natives in an altercation of uncertain origin.