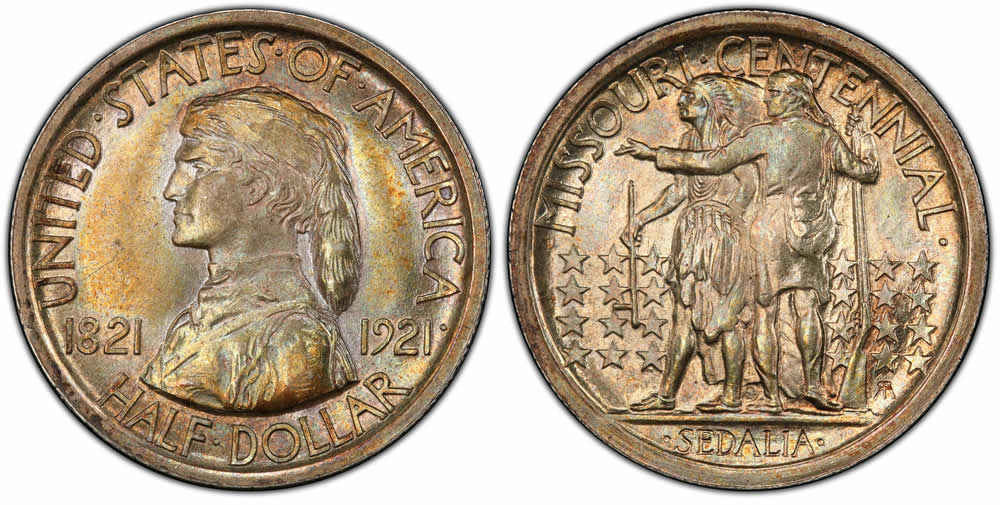 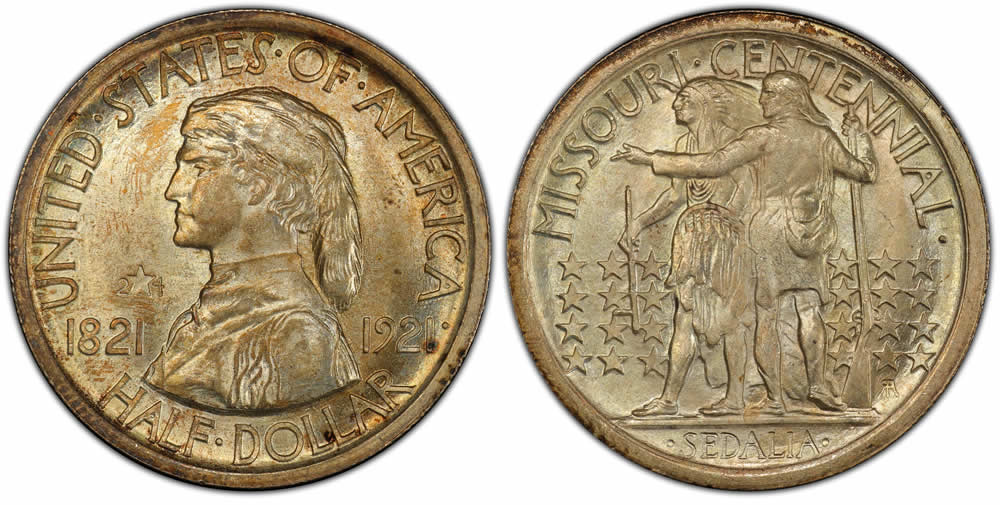 Although the legendary folk-hero and "Wilderness Trail" blazer Daniel Boone is often connected with Kentucky, it was present-day Missouri that he called home for the last quarter-century of his life. By the time he died at the age of 86 in 1820, Missouri had come a long way from the untamed part of Spanish America that Boone had settled in at the end of the 18th century. This fertile and well-watered area now contained enough people to warrant consideration as a state. But Missouri was a slaveholding territory, and admission to the Union threatened to upset the delicate balance of power in Congress between slave and free states. After extended, rancorous debate and legislative horse-trading, the "Missouri Compromise" was reached. It pleased no one, but it did allow Missouri to enter the Union in 1821 and retain its "peculiar institution," but only after Maine was granted admission as a free state.

A century later, on March 4, 1921, Congress authorized the minting of 250,000 half dollars commemorating Missouri's admission to the Union. Appropriately, initial distribution of the coins was to take place at the Centennial Exposition and State Fair scheduled for that August in Missouri's first capital, Sedalia. James Montgomery, chairman of the Missouri Centennial Exposition Committee, suggested that the estimated $1,750 production cost for design and die preparation be borne by striking 5,000 special coins with a 2

4 designation, signifying Missouri's admission to the Union as the 24th state. After these specially struck coins were produced, the 2

4 designation would be effaced from the dies, and all subsequent coins would lack this feature, thus creating an instant rarity.

Robert Aitken, designer of the Panama-Pacific fifty-dollar gold pieces, was chosen to create the Missouri commemorative half dollar. Following the Committee's proposals, Aitken at first included the state seal in his sketches for the reverse. He soon dropped it from consideration as unsatisfactory for a coin design. The Committee, however, was evidently unaware of the extensive changes Aitken had made, as the coins continued to be advertised throughout the summer of 1921 as having the state seal on the reverse. Although Chairman Montgomery suggested that the obverse feature a depiction of Daniel Boone with an Indian sitting at his feet, signifying "that the white man had supplanted the Indian in the Missouri Territory," Aitken's final design implied no such sentiment. His obverse showed a profile view of Boone reportedly modeled after a bust of the frontiersman in the New York University Hall of Fame. Boone wears a coonskin cap and buckskin shirt and is flanked by the dates 1821 and 1921. Encircling the periphery are the inscriptions UNITED STATES OF AMERICA and HALF DOLLAR.

Aitken's reverse design was a modified version of Montgomery's original concept for the obverse but with both figures standing. A frontiersman points westward with a Native American at his side; both are flanked by twenty-four stars, reinforcing Missouri's admission as the twenty-fourth state. The legend MISSOURI CENTENNIAL is above and the city name SEDALIA below. Conspicuously absent are the usual inscriptions LIBERTY, E PLURIBUS UNUM and IN GOD WE TRUST, no doubt omitted for lack of sufficient space. Both obverse and reverse designs are in deep relief, imparting a medallic quality to the coin. Aitken's initials, RA, are neatly placed in the lower right reverse field near the butt of the frontiersman's rifle.

4 designation were sold, but the plain variety didn't fare as well; 29,600 pieces were later melted. One matte proof 2

4 has been reported, allegedly struck for Mint Engraver John R. Sinnock, a coin collector whose estate contained numerous special strikings of coins from the 1920s, '30s, and '40s.

As a marketing tool, Montgomery's 2

4 idea was a success; his goal of selling 5,000 of these special coins was easily realized. The coins were offered to collectors who, it was believed, would buy them so that their collections would be complete. As a result, Missouri 2

4 halves have been better preserved over the decades than those of the plain variety, because collectors tend to take better care of coins than the general, non-collecting public. It was the wider audience of non-collectors who purchased the bulk of the plain Missouri halves. They were not so kind to these pieces, and a large percentage of this issue has suffered surface abuse from cleaning, light circulation and use as pocket pieces. Today, the two varieties are virtually the same in rarity in most grades, but the allure of the incused 2

4 symbol persists, and these specially struck coins frequently command higher prices. Although all commemorative collectors desire at least one Missouri half, due to its lower cost in most uncirculated grades, the plain coin is usually the choice for the type collector. The 2

4 is more often sought for a complete set.

Because so many Missouri halves were sold to non-collectors, light friction and contact marks are often a problem with this issue. On the obverse, friction first shows on Boone's cheek and on the hair behind his ear and shoulder. On the reverse, rub is first evident on the arm of the frontiersman. Luster ranges from bright and frosted to a dull, satin-like finish, with most examples exhibiting satiny surfaces.

Striking details on most Missouri halves are surprisingly soft for a coin with such a limited mintage. The sharpest strikes are usually found on the 2

4 coins because they were the first pieces struck. Completeness of strike can best be gauged by how distinct the leather strap is from the powder horn to the frontiersman's shoulder. Only the sharpest 2

4 coins and the first coins struck from plain dies exhibit complete definition in this area. Counterfeits are not generally a problem with this issue. Yet, like the Grant with-star variety, it is always possible that a plain coin could be altered by punching a 2

4 into the obverse field.

4 halves were a commercial success, the "plain" variety failed to sell anywhere near the 250,000 coins authorized by Congress. This was due in part to a nationwide recession in 1921 and the natural reluctance of collectors and non-collectors alike to spend one dollar on a fifty-cent piece. No doubt the poor publicity provided for the coins by the Centennial Committee also contributed to weak sales. Combined, these factors ensured the future status of both Missouri varieties as key commemorative issues.