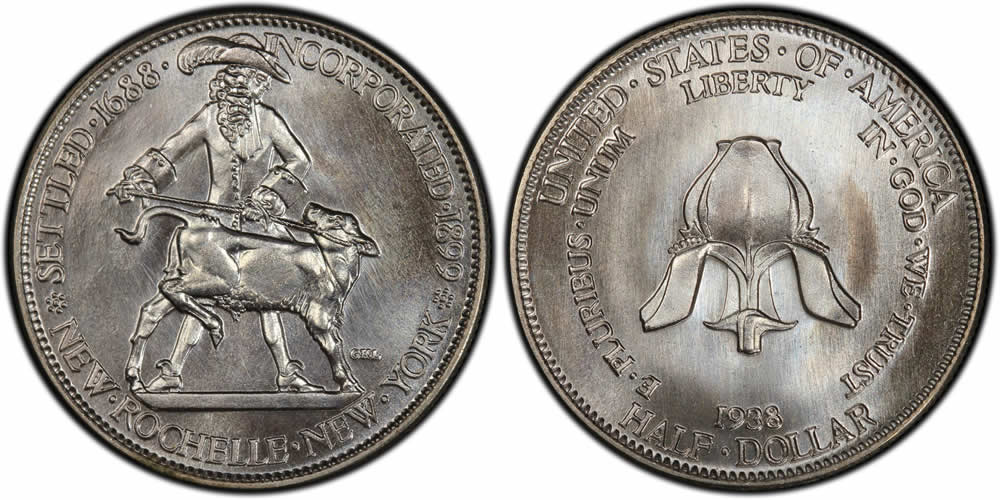 The 1938 New Rochelle half dollar presents one of those curious aspects so peculiar to United States commemoratives in that it bears no less than three dates, yet none of them is the actual date of coinage! To maximize its marketing potential, the sponsors of this issue had it minted in 1937, extending the logical sales period for the better part of a year. This ploy worked, and most of the coins struck were sold to eager collectors, with only a few thousand remaining at the end of the program.

This half dollar commemorates the 250th anniversary of the settlement of New Rochelle, New York. A prosperous suburb of New York City, it is only "Forty-Five Minutes from Broadway," this being the name of a popular 1906 song by showman George M. Cohan. In a somewhat more contemporary reference, New Rochelle is known also as the 1960s home of television characters Rob and Laura Petrie in The Dick Van Dyke Show. Proceeds from the sales of New Rochelle half dollars financed a 250th anniversary festival held June 10-19, 1938.

The gentleman and calf portrayed on the obverse of this coin relate the form of payment made for this land when first settled by French Huguenots in 1688. John Pell, Lord of Pelham Manor, sold 6,000 acres to Jacob Leisler, who was acting as agent for the colonists. Among the terms of sale was the provision that Leisler and his heirs would furnish to "John Pell his heirs and assigns Lords of the said Mannor of Pelham . . . as an Acknowledgment to the said Mannor one fat calf on every four and twentieth day of June Yearly and Every Year forever [if demanded]."

Despite the purely local interest of the 1938 anniversary, this coin was approved through the influence of its sponsors, the Westchester County Coin Club of New Rochelle. Being an affluent suburb of New York City, it's also quite possible that many of the town's residents were well placed to exert pressure on their Senators and Representatives. Introduced January 6, 1936, the original draft legislation placed the sale of New Rochelle coins in the hands of the coin club, a prospect viewed with disfavor by Congress. With this provision stricken from the bill, it passed on May 5, 1936.

Calling for not more than 25,000 half dollars, these to be coined at a single mint, the New Rochelle bill reflected some of the wisdom gained from commemorative coin programs that had gone on for years, with coins being struck at all three mints and with several dates. The New Rochelle coins were specifically to be dated 1938, irrespective of when they were coined. This guaranteed that there would be only a single coin that collectors need acquire to keep their sets complete.

Originally selected to furnish designs for this type was sculptor Lorrilard Wise. His obverse model featured the interesting scene of a crouching Native American viewing from shore the approach of a European ship, with a sunburst on the horizon. The seal of the City of New Rochelle was the principal feature of his reverse, the balance of the design consisting entirely of commemorative and statutory inscriptions. Though a bit crudely rendered, these models would have made for a satisfactory coin.

The Federal Commission of Fine Arts delayed approving the design, offering a number of suggestions in the interim. Commission Chairman Charles Moore finally related its approval on August 26, 1936, in a letter to Acting Mint Director Mary O'Reilly: "The Commission of Fine Arts approve the models with the understanding that the criticisms made by Mr. [Lee] Lawrie will be embodied in the finally completed models." A formal approval was made on September 16th.

Just a few weeks later, the Commission had second thoughts and rejected the obverse design. In a letter dated October 28, 1936, Chairman Moore advised New Rochelle Commemorative Coin Committee Chairman Pitt Skipton that "The Commission feel that this work should be placed in the hands of an artist who has had experience in producing designs for medals and coins." Skipton found such an artist in the person of one Gertrude K. Lathrop, sculptor of the Albany Charter half dollar minted that same year. Her work on this coin so impressed him that Skipton persuaded Ms. Lathrop to undertake the New Rochelle half dollar.

The shoreline scene was dropped in favor of the fatted calf of historical fame. This is shown on the obverse being drawn by a man in elegant dress who is presumed to be John Pell. Arranged in arcs around the periphery and separated by asterisks are the legends NEW•ROCHELLE•NEW•YORK and SETTLED• 1688•INCORPORATED•1899. The artist's initials GKL appear to the right of the calf's forelegs. The reverse of this coin type is dominated by a fleur de lis, an element found within the city's coat of arms and borrowed from the arms of La Rochelle, France. Arranged in arcs around the periphery are the statutory inscriptions UNITED•STATES•OF•AMERICA, E•PLURIBUS•UNUM, LIBERTY and IN• GOD• WE•TRUST. The date 1938 and value HALF•DOLLAR appear at the bottom in two lines. This design was approved by the Commission of Fine Arts shortly after its submission and later by the Treasury Department on February 25, 1937.

The total authorized mintage of 25,015 halves (which includes 15 coins reserved for assay) was produced at the Philadelphia Mint in April of 1937. Though the coins were sponsored by the Westchester County Coin Club, their distribution was assigned to the First National Bank of New Rochelle. A number of coins of were sold locally at $2 apiece but, in keeping with most commemorative programs, the majority went to coin collectors placing mail orders. Allowing for postage, a single coin by mail cost $2.18, or two for $4.21 and five for $10.27. These orders were filled by the New Rochelle Commemorative Coin Committee. Sales were directed by none other than Julius Guttag, a resident of New Rochelle but also a partner in Guttag Brothers of New York City, a numismatic and securities dealership.

Though the feverish speculative market for commemoratives collapsed in the waning months of 1937, the New Rochelle issue sold quite well. When sales slowed to a trickle, members of the Westchester County Coin Club bought up hundreds of the coins at face value. The remaining pieces, some 9,749 halves in all, were returned to the Philadelphia Mint shortly after the festivities in June of 1938. These were melted, leaving a net mintage of 15,251 coins.

Being coin collectors themselves and sensitive to the issue of quality, the sponsors selectively removed any coins bearing serious flaws from those distributed. The result was a noticeably higher level of quality for this coin type than for most commemorative issues. Circulated coins are rare, and most mint state pieces grade MS-63 or higher. In fact, examples grading as high as MS-66 are not particularly scarce. The luster on coins of this type ranges all the way from frosty to brilliantly prooflike. Check for wear on the calf's hip and the highpoints of the fleur de lis.

Included within this coin's mintage were 50 presentation pieces struck on polished blanks; these are quite prooflike in quality. Some 10-14 matte proofs are also rumored to have been produced, but very few have ever surfaced. The presentation coins were distributed in small, dark red boxes with a velvet liner to hold the half dollar. These were accompanied by a silver medal produced by Tiffany & Company from Lorrilard Wise's original reverse design depicting the New Rochelle seal. Regular editions of this half dollar were distributed in holders that could accommodate from one to ten coins. It featured the city seal and the names of key committee members. Also found within this multi-page holder are a brief history of the city and information about the coin and its designer. All of these items are considered quite collectable and carry a value of their own.

Included within this coin's mintage were 50 presentation pieces struck on polished blanks; these are quite prooflike in quality. Some 10-14 matte proofs are also rumored to have been produced, but very few have ever surfaced.

View all on eBay
Sponsors
Sponsors