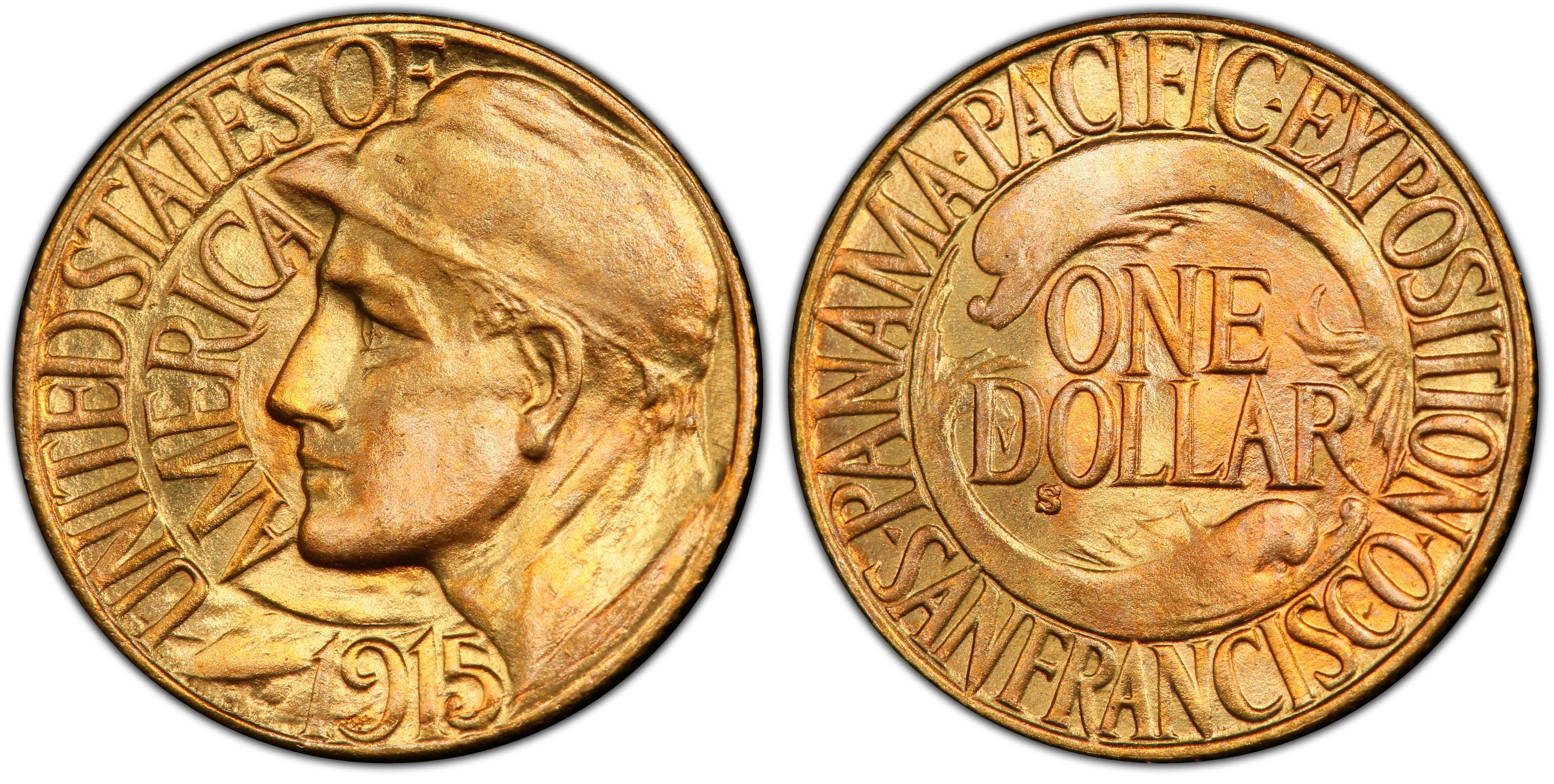 The Panama Canal ranks among the greatest man-made marvels in the world - a 51-mile-long system of natural lakes, excavated channels and locks that slashes up to 8,000 nautical miles from voyages between the Atlantic and Pacific oceans. It was viewed as such an accomplishment that Uncle Sam marked its opening with a gala world's fair in San Francisco: the Panama-Pacific International Exposition. And as part of that celebration, the United States Mint issued five different commemorative coins in four different denominations - the most diverse tribute for any single event in the first hundred years of U.S. commemorative coinage and the first in which coins were struck in both silver and gold.

The notion of building such a waterway dates back as far as the 16th century, when Spanish conquistadors conceived it as a shortcut to the treasure-laden lands along the Pacific coast of the Americas. The first serious effort to transform that dream into a reality took place under the auspices of a French consortium, the French Panama Canal Company, which set out to build a canal in 1880. The French, however, hadn't sufficiently grasped the formidable difficulties they would face. As a result, 10 years later they were forced to abandon the project after losing the staggering sum of $287 million - a king's ransom and then some, in an age when laborers routinely earned well under $5 a day.

Like the Europeans, the United States came to be keenly aware of the benefits it might reap from a Panama Canal - particularly after the mid-19th century, when the California Gold Rush opened America's West to ever more intensive development and greatly expanded shipping between U.S. ports on the East and West coasts. New impetus for a canal came with the Spanish-American War of 1898, as the U.S. took on a greater role in the global arena. Congress responded in 1902 by passing the Spooner Act, which authorized President Theodore Roosevelt to acquire the rights to build a canal and proceed with its construction. Roosevelt did so with characteristic relish and relentlessness. When Colombia - which then had sovereignty over Panama - balked at the proposal, he engineered and guaranteed a declaration of independence by the Panamanians and then arranged a treaty with them for the canal.

Like the French before them, American engineers were confronted by enormous obstacles. Unlike the French, however, they didn't have to face the worst ravages of yellow fever: Research a few years earlier by Dr. Walter Reed linking this deadly disease to the bite of a mosquito had enabled sanitarians to keep it under control during construction.

Completion of the canal coincided almost exactly with the outbreak of World War I in Europe. The war began officially on July 28, and the new canal opened to traffic just 18 days later, on August 15. Americans, however, were still three years away from direct involvement in the conflict, and the Panama Canal was not only closer to home but also a source of more immediate interest to many in this still rather insular country.

The San Francisco fair reflected the nation's exuberance over its remarkable accomplishment (as well as civic pride over San Francisco's renaissance following the earthquake and fire in 1906, which served as a second theme for the celebration). The fair featured exhibits by 36 countries, 44 states of the Union and several U.S. territories, as well as such attractions as a racetrack, a livestock building and an amusement midway. The exposition cost about $50 million and drew an estimated 19 million visitors during its more than nine-month run, which lasted from February 20 to December 4, 1915.

The man in charge of "Pan-Pac" coinage was Farran Zerbe, a former president of the American Numismatic Association and a savvy showman who promoted numismatics non-stop. Issuance of the coins to help finance the fair - and, in the process, to showcase the hobby - was Zerbe's idea, and this as much as anything accounts for the scope of the program. He also was deeply involved in their preparation and sale.

It wasn't until January 16, 1915, the very eve of the fair, that Congress finally authorized the coins. The enabling legislation called for a silver half dollar plus gold coins in three denominations: $1, $2.50 and $50. Mintage limits were set at 200,000 for the half dollar, 25,000 for the gold dollar, 10,000 for the quarter eagle and 3,000 for the $50 piece, with these 3,000 subsequently being divided equally between round and octagonal versions.

Upon the recommendation of the federal Commission of Fine Arts, the Treasury Department turned to outside artists for help in designing the coins. It commissioned Charles Keck, a well-known New York sculptor, to design the gold dollar. Keck's initial design carried a depiction of Poseidon, the god of the sea in Greek mythology. This was rejected, however, by Treasury Secretary William Gibbs McAdoo, who deemed it too detailed for such a diminutive coin. Keck then fashioned a new design featuring a portrait of a typical Panama Canal laborer. The workman faces left on the obverse of the coin, into the two-line inscription UNITED STATES OF / AMERICA, with the date tucked below his chin. The statement of value ONE DOLLAR is the central device on the reverse, with dolphins above and below, symbolizing the joining of two oceans by the canal. This is encircled around the rim by the words PANAMA PACIFIC EXPOSITION–SAN FRANCISCO. Although the workman is sometimes mistaken for a baseball player because of his cap, on the whole this coin's design is generally viewed with favor by coinage critics.

The dollars were struck (as were all the Pan-Pac coins) at the San Francisco Mint. The S mintmark appears below the D and O of DOLLAR. The maximum authorized mintage of 25,000 was struck (along with 34 pieces for assay), but evidently, many fairgoers balked at the official price of $2 each, as 10,000 pieces were subsequently melted, leaving a net mintage of 15,000 coins. The dollars were sold individually in envelopes imprinted with a description of the coin, the designer's name and the price - "$2.00 - 6 for $10.00." The coins were also included in three-, four- and five-piece sets in velvet-lined leather cases and five- and 10-piece sets in copper frames. After the exposition closed, the price was raised to $2.25 each. The dollars remained available for years afterward, with a large quantity in the possession of celebrated dealer B. Max Mehl. As late as the 1950s, Mehl still had quite a few Pan-Pac dollars on hand, many of which were sold to dealers Abe Kosoff and Sol Kaplan.

Pan-Pac gold dollars are not difficult to locate in grades up thru MS-65, but since many of these coins were mishandled by the public, relatively few survive in the higher mint-state grades. Points to check for wear are the peak of the laborer's cap and the heads of the dolphins. Officially, no proofs were struck, but the late Walter Breen stated in his Complete Encyclopedia of U.S. and Colonial Coins that there were unconfirmed reports of one brilliant proof. Several varieties of counterfeits are known to exist: authentication of any questionable specimen is strongly recommended.