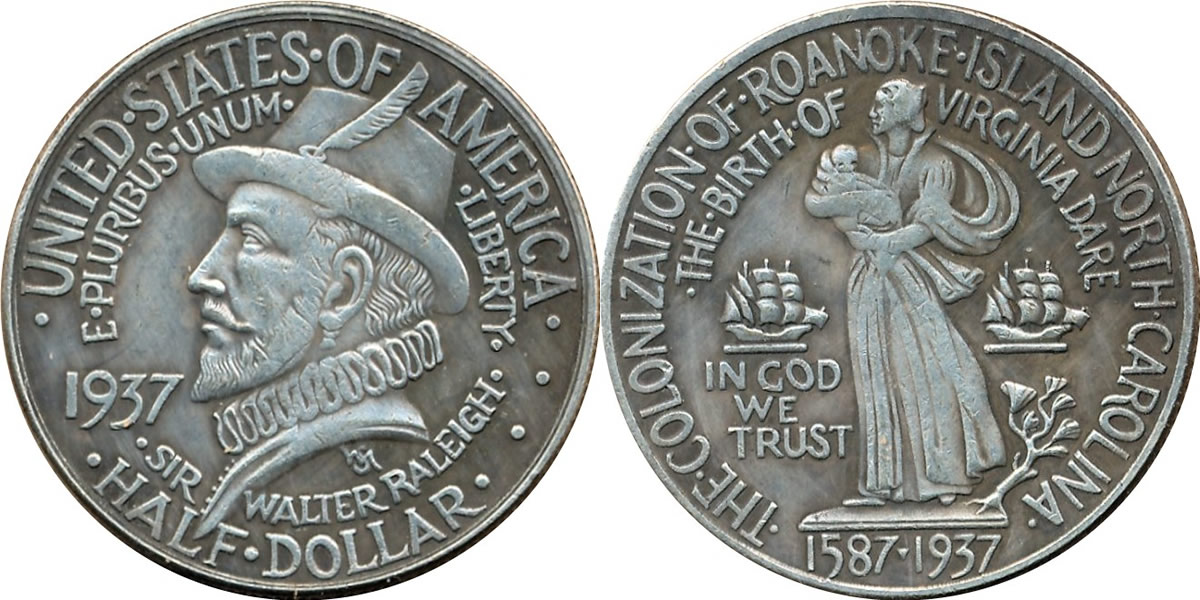 The story of the Lost Colony of Roanoke Island is a sobering reminder of how risky a journey to the New World was in the 16th Century. It's a romantic tale, but one tinged with sadness at the lives lost. Though it pertained to a specific geographical location, the commemorative half dollar issued to recall this settlement nevertheless marked a chapter in American history worthy of remembrance by all.

Among the many adventures in the life of Sir Walter Raleigh (1552?-1618), his establishment of a colony in America was perhaps one of the least significant. Showered with favors by an enchanted Queen Elizabeth I of England, Raleigh was granted a patent in 1584 to explore "remote heathen and barbarous lands." Rather than undertake such a journey himself, he instead equipped two ships and directed them to find a suitable anchorage in America at some point in proximity to Florida, then a colony of England's arch-enemy Spain. His agents reported that an island the natives called Roanoke, located off the coast of what is now North Carolina, offered the desired attributes. Furthermore, the inhabitants showed no antagonism toward the English. Queen Elizabeth bestowed the name Virginia upon the entire region adjacent to Roanoke Island, a tribute both to the land's newness to Europeans and to her own highly publicized virtue.

In 1585, Raleigh dispatched seven ships to Roanoke with 107 colonists under the command of his cousin, Sir Richard Grenville. The latter returned to England to procure additional supplies, leaving the settlers in the care of Ralph Lane. The severity of life in America soon overwhelmed their resources. When Sir Francis Drake, returning from a raiding expedition against the Spanish Main, stopped at Roanoke the following year, he found the colonists in a miserable state and more than willing to accept his offer of transport to England. Sometime afterward, Grenville returned with supplies and additional colonists. Finding no signs of life, he detailed 15 of his men to the island with provisions sufficient to last them two years.

Despairing of any profit from his colony, Raleigh placed the venture in the hands of a joint stock company willing to risk its own capital. Known as the City of Raleigh in Virginia, in 1587 this company financed the journey of three ships to America, carrying nearly 125 colonists. Raleigh's instructions were to pick up the 15 men left on Roanoke and then proceed to the more inviting Chesapeake Bay, where all the colonists were to be landed. Discovering that the 15 had perished, the ships' commander, Simon Ferdinando, inexplicably abandoned the colonists on Roanoke, refusing the orders of Governor John White to take them to their destination.

White returned with Ferdinando to England to arrange for additional supplies, expecting to return soon. War with Spain, however, tied up all available ships for the next several years. It was not until 1590 that White returned to Roanoke, only to discover that his own family and all of the other colonists as well had vanished without a trace. The only sign of their inhabitation was the word CROATOAN carved into a tree trunk. The name of an adjoining island, its connection to the settlers was never determined. Sadly, White and his company sailed for England, and the fate of the Lost Colony remains a mystery to this day.

In remembrance of the 350th anniversary of the Roanoke Island settlement, the Roanoke Colony Memorial Association was formed. It successfully petitioned Congress for a commemorative coin marking the event, though the original draft bill called for a medal instead. This issue likewise celebrated Old Fort Raleigh on Roanoke Island and the birth of Virginia Dare, granddaughter of John White and the first European born on American soil. Perhaps because of space considerations, no mention of the fort appears on the coins.

The designer of the Roanoke half dollar was William Marks Simpson, who also created coins honoring the Battle of Antietam and the Bicentennial of Norfolk, Virginia. He produced two sets of models, the first receiving a tentative approval from the Federal Commission of Fine Arts. Incorporating the minor changes suggested by sculptor member Lee Lawrie, Simpson prepared a second pair of models. These were approved by the commission on December 12, 1936, though it was adamant that his older spelling of Ralegh be changed to Raleigh, in keeping with modern practice. As completed, the design depicts a left-facing bust of Sir Walter Raleigh on the obverse, a likeness frequently compared to actor Errol Flynn. Its reverse is dominated by a standing figure of Elinor Dare holding the infant Virginia. In addition to the commemorative and statutory inscriptions are a pair of ships, merely representative of sea travel, and a pine sapling. The artist's stylized initials appear beneath the truncation of Raleigh's bust.

Becoming law on June 24, 1936, the Roanoke bill called for the minting of not less than 25,000 half dollars, though no maximum was specified. These were to be dated 1937, regardless of when they were struck. Some limit was imposed, however, as none could be struck after July 1, 1937. In actual fact, a total of 50,030 pieces was coined (the odd 30 coins were reserved for assay and not issued). Minted in two press runs (January and June of 1937), some 25,015 halves were coined in each. All were produced at the Philadelphia Mint, though the hub reductions had been performed by Medallic Art Company of New York.

In late 1936, the Roanoke Colony Memorial Association began offering its coins by mail at $1.65 each, which included 15 cents for postage. Though the booming market in commemorative coins had already peaked the previous summer and the entire hobby was suffering from a hangover, the Association proceeded with a second order of coins in June of 1937, just before the mandatory deadline of July 1. This proved excessive, as sales soon dwindled. Ultimately, some 21,000 coins were returned to the Philadelphia Mint, leaving a net mintage for this type of 29,000.

Though some coins were likely sold during the August 1937 celebration at Old Fort Riley, most appear to have been distributed through the mail to coin collectors. For that reason, many have survived in uncirculated condition. In fact, most specimens are quite choice, and pieces grading as high as MS-65 are plentiful. Surface quality will vary from prooflike to satiny, the former representing pieces coined from fresh dies. Though most Roanoke halves are well struck, a few may show weakness on Raleigh's ear or the brim of his hat. Elinor Dare's head is another potential trouble spot. While worn examples are rare, check these same highpoints for signs of wear, as well as Elinor's upper left arm.

The experts disagree as to whether the handful of very flashy and well struck specimens sometimes described as proofs are indeed proof coins. Nevertheless, these pieces carry a premium for their obviously superior quality.

Roanoke halves were distributed in white, card stock holders that could accommodate up to five coins. The front cover of each holder depicts the coin's obverse and reverse, as well as the dates 1587-1937. Inside is found a brief description of the coin and a short history of the first English settlements in America. These holders and the coins they contained were shipped in light tan mailing envelopes inscribed ROANOKE COLONY MEMORIAL ASSOCIATION OF MANTEO, N.C. Also found on the envelope are spaces designated VALUE and NO., presumably to indicate the contents. These envelopes were sealed with red wax. Both the holders and the envelopes are highly collectable; the two together are particularly prized by commemorative coin enthusiasts.

Experts disagree as to whether the handful of very flashy and well struck specimens sometimes described as proofs are indeed proof coins. Nevertheless, these pieces carry a premium for their obviously superior quality.