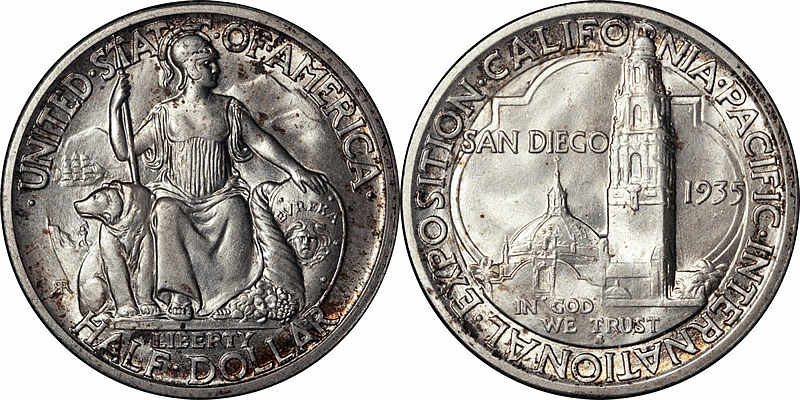 Popularly known as the San Diego half dollar, this issue commemorates not that city but the exposition held there during the years 1935 and 1936. Easily one of the most attractive of American commemorative coins, its appealing design makes up in part for the shameless manner in which it was marketed by the issuing committee. The sole purpose of this coin was to raise funds for the exposition, and its sponsors went to embarrassing lengths to maximize sales.

Even though a commemorative stamp was issued bearing the dates 1535 and 1935, the California-Pacific International Exposition did not celebrate any particular event or anniversary, and the significance of the earlier date remains a mystery. In any case, only the date of minting appears on the coins.

It seems that the real purpose of the exposition was to advertise the virtues of San Diego, which at that time included a low cost of living, plenty of sunshine, a large U. S. Navy base and rich agricultural development. In this mission, it was only partly successful, as the total attendance over two seasons amounted to around 3,750,000 persons. Costing an estimated $20 million, the fair was spread out over some 1400 acres, making it one of the largest ever held, at least in a geographical sense.

Legislation was passed May 3, 1935 authorizing a mintage of not more than 250,000 pieces. No specifics were given as to the date the coins would bear or at which mint they would be coined. This oversight was used to advantage by Exposition Treasurer Emil Klicka when sales of the first issue fell drastically short of the number coined.

Accomplished sculptor Robert Aitken, creator of the Missouri Centennial half dollar and the Panama-Pacific fifty-dollar piece, was commissioned to design and sculpt this coin. His skill and professionalism proved itself when his models breezed through the approval process. Submitted to the federal Commission of Fine Arts within weeks of the bill's passage, they were approved by the commission on July 5, 1935 almost without comment. Yet, despite the absence of a legal requirement to do so, the motto LIBERTY was subsequently added in small letters. In all other respects, however, Aitken's models were used without change.

Although it contradicts classical practice in which the obverse is considered to be the side depicting the commemorative theme, numismatists have traditionally considered the obverse of this issue to be the side portraying the Roman goddess Minerva. In addition to her seated figure may be seen a grizzly bear, a cornucopia and a shield bearing a gorgon's head and the motto EUREKA (I've found it!). All of these elements, along with the tiny images of a gold miner with pickaxe and a square-rigged sailing ship, are adapted from California's state seal. Arranged in an arc above this tableau is the legend •UNITED•STATES•OF•AMERICA•, below it the value HALF•DOLLAR. Wedged in between Minerva's base and the value is the motto LIBERTY, while the designer's monogram RA appears to the left of the bear. The reverse of this coin is dominated by two of the California Buildings at the exposition: the Chapel of St. Francis (with dome) and the California Tower. The motto IN GOD WE TRUST is below, SAN DIEGO above and the date of coinage at right. Letters D or S appear below the first T in TRUST indicating the place of coining, Denver or San Francisco. All of this is framed within an ornate border, which the late researcher Walter Breen identified as a tressure, a decorative element appearing on some Spanish coins of the 16th Century. Outside this border, arranged in a peripheral arc, is •CALIFORNIA•PACIFIC•INTERNATIONAL•EXPOSITION.

The work of reducing these models to hubs was contracted out to Medallic Art Company of New York City, a common practice for commemorative coins. The progress of this issue was rapid, and the finished dies were on hand at the San Francisco Mint in time for the entire authorized coinage of 250,000 to be struck there during August of 1935 (an additional 132 pieces coined for assay purposes were later destroyed). By the 12th of that month, the coins were for sale on the exposition grounds.

Although the general public attending the fair purchased a number of these coins, the natural market for them was the coin collecting community. Collectors, however, were not so easily persuaded to buy this issue, even at the offering price of just one dollar plus postage. Past experience had proved that commemoratives produced in such numbers were often wholesaled to dealers at a discount or, what's even worse, were sometimes dumped into circulation at face value. Given this possible scenario, coin collectors were reluctant to buy more than one example, if that, and it soon became evident that total sales would be measured not in the hundreds of thousands but in the tens of thousands.

As this unpleasant reality sank in, the coin's sponsors sought additional legislation to recoin the unsold remainder with a different date. As preposterous as this sounds, they were successful. A bill passed May 6, 1936 permitted the return for recoining of up to 180,000 of the 1935-S halves. The new coins were to bear the date 1936, regardless of when they were struck or issued! Although the exposition's backers further attempted to have the San Diego coins made at all three mints, this recoinage was assigned to the Denver Mint alone. Including 92 assay pieces, a total of 180,092 half dollars dated 1936-D were struck that summer.

Offered at $1.50 this time, their mintage was still too high to attract many buyers, and sales languished again. Treasurer Klicka was tireless in promoting the rarity and desirability of these coins, perhaps never understanding how the large numbers coined affected sales. In 1937, in an attempt to make them seem more valuable, he raised the price for either coin to $3, only to then lower it the following year to $2 for the 1935-S issue and to just $1 for the 1936-D coins. None of these efforts met with much success, however, and some 150,000 of the 1936-D halves met the same fate as the 180,000 1935-S coins previously melted. This left net mintages of 70,000 for 1935-S and only 30,000 for 1936-D.

Even with so many coins destroyed, large numbers remained in the hands of a few officials associated with the exposition. One hoard of 1935-S halves reportedly contained 31,050 pieces, nearly half of the number sold! Quietly sold off beginning in 1966, great care was taken to not destroy the market for these popular coins. A smaller but still quite impressive hoard of 10,000 1936-D halves was effectively distributed during the 1980s.

San Diego halves typically exhibit very attractive and quite frosty luster throughout, although this will sometimes appear dull. 1935-S halves are usually well struck, although often seen with a blob-shaped mintmark, but the 1936-D issue is almost universally indistinct on the upper half of the tower. Both varieties are subject to contact marks and abrasions, particularly in the exposed area of Minerva's knees and long gown. Circulated examples of the 1935-S coins are plentiful, and both coins remain readily available in all mint state grades through MS-66. Look for the first signs of wear on Minerva's knees and on the upper-right portion of the tower.

Several types of holders were used for delivery of these coins by mail. In addition to generic holders for one or three coins, customized mailers were produced which depicted the two California Buildings on their cover in blue and silver ink. A special holiday edition was labeled Merry Christmas in blue against a silver background. Another Christmas card variant is printed in red and green with a poinsettia plant. The first two have a blue velour interior, while the last utilized green velour.