With the entry of the United States into World War II, nickel became a critical war material, and the Mint sought to reduce its use of the metal. On March 27, 1942, Congress authorized a nickel made of 50% copper and 50% silver, but gave the Mint the authority to vary the proportions, or add other metals, in the public interest. The Mint's greatest concern was in finding an alloy which would use no nickel, but still satisfy counterfeit detectors in vending machines. An alloy of 56% copper, 35% silver and 9% manganese proved suitable, and this alloy began to be coined into nickels from October 1942. In the hopes of making them easy to sort out and withdraw after the war, the Mint struck all "war nickels" with a large mint mark appearing above Monticello.

The mint mark P for Philadelphia was the first time that mint's mark had appeared on a US coin. The prewar composition and smaller mint mark (or no mint mark for Philadelphia) were resumed in 1946. In a 2000 article in The Numismatist, Mark A. Benvenuto suggested that the amount of nickel saved by the switch was not significant to the war effort, but that the war nickel served as a ubiquitous reminder of the sacrifices that needed to be made for victory.

Within the war nickel series collectors recognize two additions, one official, the other counterfeit. Some 1943-P nickels are overdated. Here a die for the previous year was reused, allowing a "2" to be visible under the "3". In addition, a number of 1944 nickels are known without the large "P" mintmark. These were produced in 1954 by Francis LeRoy Henning, who also made counterfeit nickels with at least four other dates. 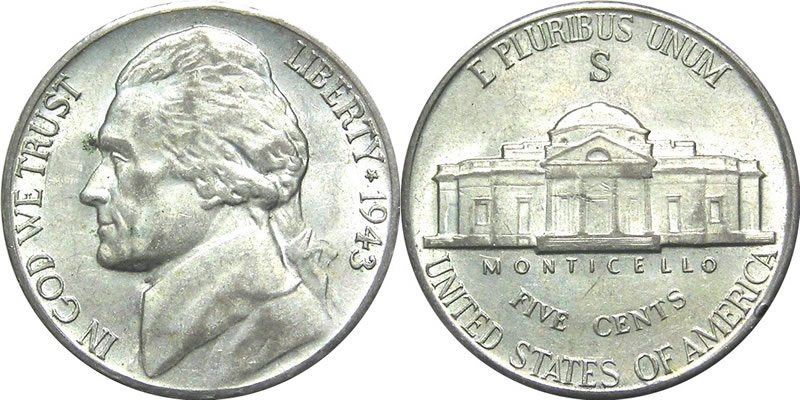