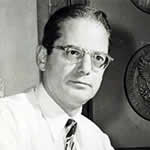 Gilroy Roberts served as chief engraver at the Mint from 1948 through 1964 after working as the top assistant to then Chief Engraver John R. Sinnock. He retired from the Mint in 1964 and went on to become an important part of the Franklin Mint, founded by Joseph M. Segel.

Gilroy Roberts was born in Philadelphia on March 11, 1905, the son of John Taylor Roberts and Blanch Dawson Gilroy Roberts, both of whom were professional artists. Talent came naturally to him, and early in life he began modeling clay and carving wood. He was educated in New York City and Bedford Village, New York, later attending classes at the Frankford Evening Art School in Philadelphia and the Corcoran School of Art in Washington, D.C. Among his instructors over a period of time were Paul Remy, Eugene Weis, and Heinz Warnecke.

In 1936 Gilroy Roberts was appointed assistant sculptor-engraver at the United States Mint, as understudy to Chief Engraver John Sinnock. He later reminisced: “The commemorative half dollars of our country were in full swing at the time, and artists’ models were arriving for processing to coining dies on a regular basis. This happened at a time when I was striving to improve my skill as a low-relief sculptor and engraver. It was a wonderful opportunity to study the creations of some of our country’s leading medallic artists, both good and not so good. It was a great influence on furthering my career.” (This is from a letter to the author, March 1. 1991.)

After working for the Mint for two years he joined the Bureau of Engraving and Printing as a portrait engraver, returning to the Mint as assistant sculptor-engraver in 1944. Appointed as chief engraver of the Mint by President Harry S Truman on July 22, 1948, Roberts designed many coins and medals during the following years and became well known as the designer of the obverse of the 1964 Kennedy half dollar. Among his other works are the items listed here:

Stamps (at the Bureau of Engraving and Printing): Famous Americans postage series of 1940 including Ralph Waldo Emerson (3¢), Stephen Foster (1¢), and Eli Whitney (1¢). In addition he produced numerous private commissions.

He resigned his post as chief engraver on October 8, 1964, to become chairman of the board of the General Numismatics Corporation (later known as the Franklin Mint) for whom he sculpted many art medals. His medals have been exhibited worldwide, and he has received numerous awards and honors.