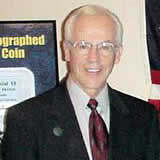 Jack L. Ahr was born on June 23, 1931 in Cincinnati, Ohio. In his early years and career in art, Jack had attended the Bowling Green State University for 2 years, studying the arts. Afterwards, he continued honing his talent and studies in the art while attending the John Herron Institute of Art located in Indianapolis, Indiana and then later at the American Academy of Art in Chicago, Illinois. Ahr also served his country by serving 2 years in the US Army stationed at Fort Knox, Kentucky, where the US gold and coin bullion reserves are located. For a period of 16 years, Jack had been employed to work as an artist and director for various companies, specializing in the design of academia items such as high school and college class rings, medals, awards, pins and commemorative medallions. In 1972, he opened his own business called Jack Ahr Design and Sales located in Arlington Heights, Illinois. 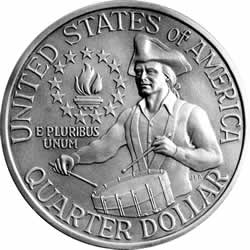 The national competition was open to all sculptors who were US Citizens, but were not currently employed by the government as a sculptor. Jack Ahr was one of those sculptors who submitted a design to be used on the Washington Quarter Dollar. On March 6, 1974, Ahr's design was selected by the US Mint and he won the competition along with the $5,000 prize. The five judges included Robert Weinman, who was the son of famous coin designer Adolph Weinman, former Chief Engraver Gilroy Roberts, sculptor Adlai S. Hardin, Julius Lauth and Elvira Clain-Stefanelli. The other two winners included Seth G. Huntington who won the design for the Kennedy half dollar and Dennis R. Williams who won the design for the Eisenhower dollar.

The design that Jack created depicted a Colonial Drummer on the reverse along with a flaming torch surrounded by 13 stars. In April of 1974, Jack Ahr was invited to the White House to be honored and also received a tour of the Philadelphia Mint. The current Chief Engraver Frank Gasparro had made a few very minor changes to all three coins before they were finalized. Jack Ahr's quarter was modified to make the drum look more authentic, alter the expression of the drummer's face and change the lettering a little bit.