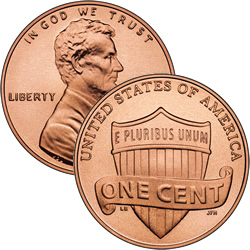 The current Lincoln cent's reverse (tails side) design is emblematic of President Abraham Lincoln's preservation of the United States as a single and united country, as required by strPageTitle III of Public Law 109-145, the Presidential $1 Coin Act of 2005. While the obverse (heads) continues to bear the familiar Victor David Brenner likeness of President Lincoln that has appeared on the coin since 1909, the reverse features a union shield with a scroll draped across and the inscription ONE CENT.

The 13 vertical stripes of the shield represent the states joined in one compact union to support the federal government, represented by the horizontal bar above. The horizontal bar features the inscription E PLURIBUS UNUM-"out of many, one"-while the inscription UNITED STATES OF AMERICA is depicted along the upper rim of the coin. The union shield, which dates back to the 1780s, was used widely during the Civil War. The shield is also featured on frescoes by Constantino Brumidi throughout the halls of the U.S. Capitol Building completed in the mid-19th century. The Secretary of the Treasury approved the reverse design for the coin after consultation with the U.S. Commission of Fine Arts and review by the Citizen's Coinage Advisory Committee. These one-cent coins have a metallic content of 2.5 percent copper, balance zinc. They are issued for circulation in quantities sufficient to meet the demands of commerce. Numismatic (proof and uncirculated) versions are included in the United States Mint's annual product offerings.