HomeCoin FactsWhat is a VAM?

What is a VAM?

If you read this and still have questions please visit our Peace an Morgan Dollar VAM Forum.

Very few VAMs have characteristics which are so obvious they can be seen with the naked eye. The overwhelming majority are identified through minute doubling of features or die damage-related markers. So, in most cases, attributing a VAM is a process requiring a loupe with minimum 15x magnification. It should be noted that in most cases, die cracks and clashing artifacts are not of themselves sufficient to warrant VAM designation, although they can qualify as a subvariety - for instance, if VAM-1 is identified, a clashed version of the same coin can be designated VAM-1A.

Die cracks abound on Morgan Dollars. If a crack becomes strong enough to be classified as a break (where the width of the crack becomes a measurable factor), in many cases it can become the primary identifying feature of an assigned VAM. 1921-D is the clearest example of this - many 1921-D VAMs are characterized by substantial die breaks. As time goes by, though, these are being identified as die states of another known VAM, and incorporated as subvarieties. The 1921-D VAM-1A is a case in point; it was recently identified as a die state of VAM-41, and is now known as VAM-41A or 41B.

Help Us Help You

There are certain areas which should be starting points for any attribution process. All of these details will not be present on every coin, but one or more of them will almost certainly figure into a successful attribution of any Morgan. Sometimes, but not always, these individual features are strong enough to be the primary attribute of a variety. If you are going to inquire about your Morgan here at Coin Community, there are the areas we will be asking to see: Date and Mintmark Location and Orientation | Doubled Dies | Die Polishing | Die Clashing

Date and Mintmark Location and Orientation

Count the number of denticles, starting at the point of the neck, to the left of the lower serif of the 1: 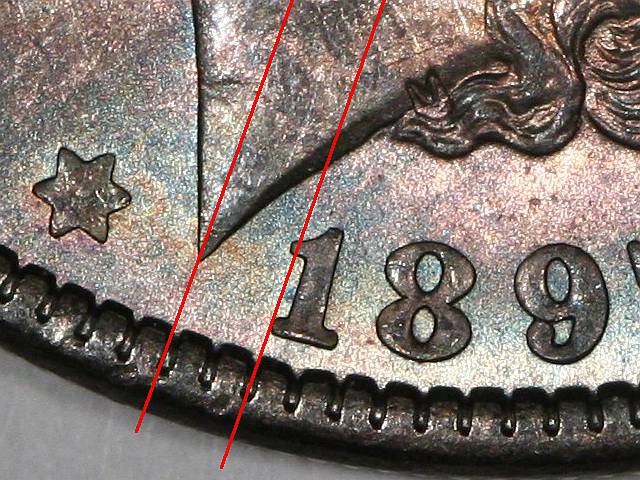 Furthermore, is the date level with the denticles (all digits the same distance from them)? Are any digits individually raised or lowered?

Mint mark location and orientation, compared to the red grid: 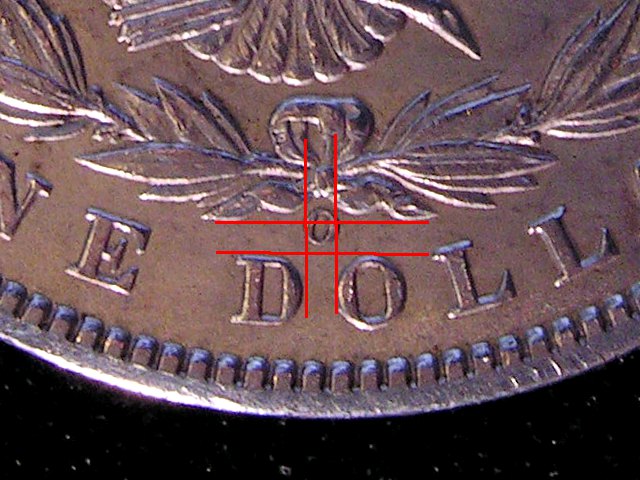 Many Morgans demonstrate doubling of one feature or another. This doubling can be in any direction. On the obverse, look for doubling: 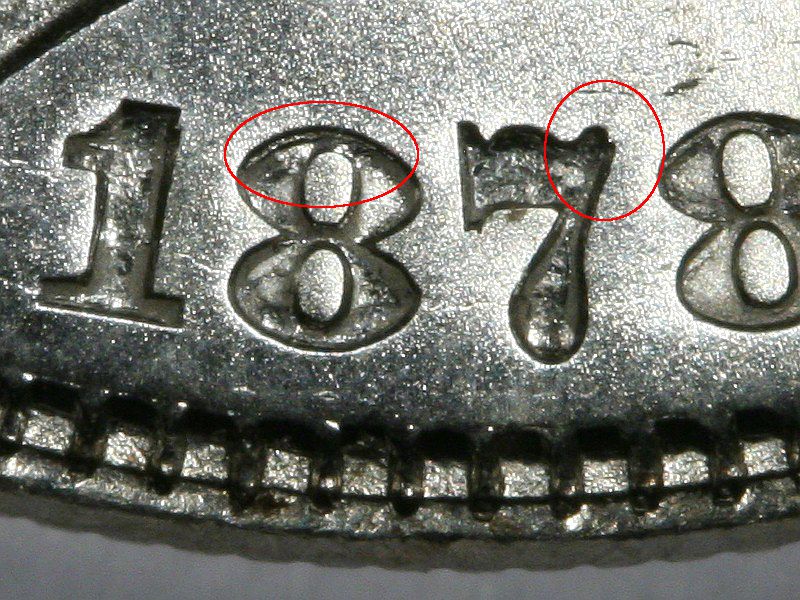 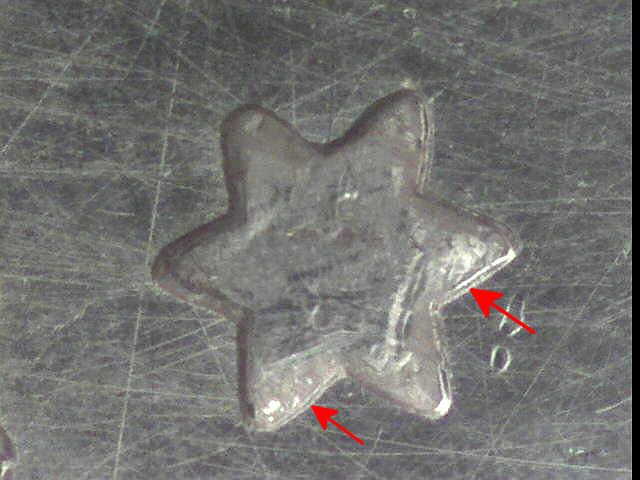 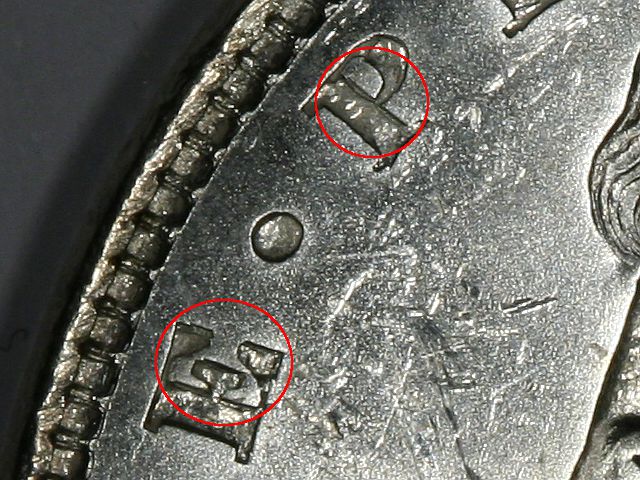 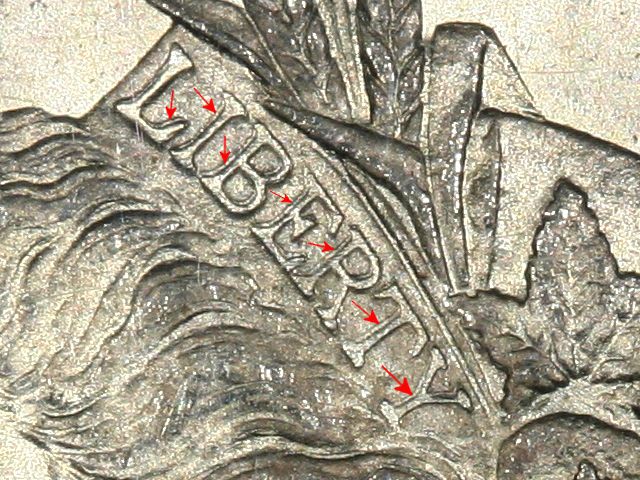 On the reverse, pay particular attention to the letters: 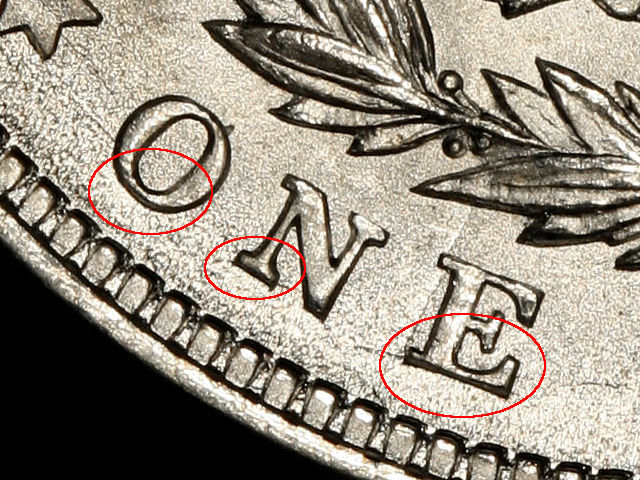 Mint marks can be doubled. Usually, the doubling is only visible inside the mint mark - a "line" inside an "O," or serifs inside an "S:" 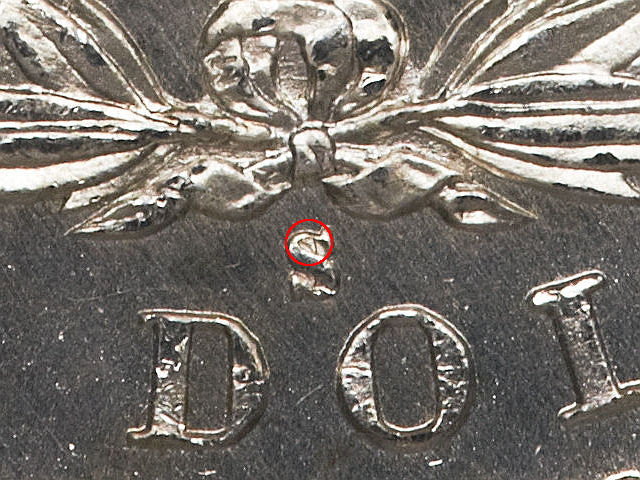 Morgan dies were polished before and during their use. Sometimes, overpolishing caused features to become weaker, or visible polishing lines were created. Some classic locations for these:

Obverse, nostril and detail in front of the eye polished away: 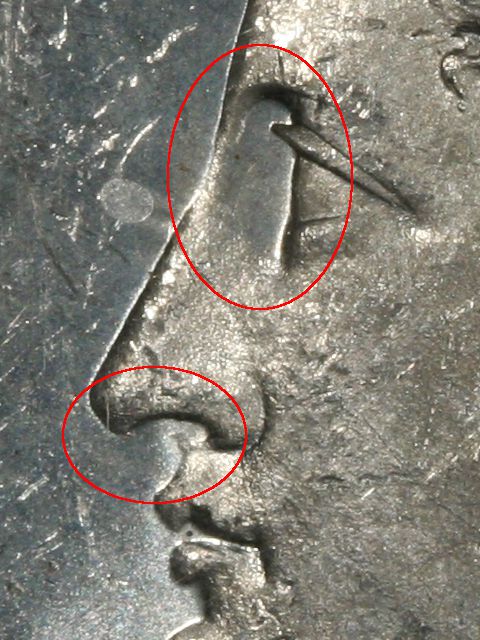 Nostril and detail in front of the eye polished away 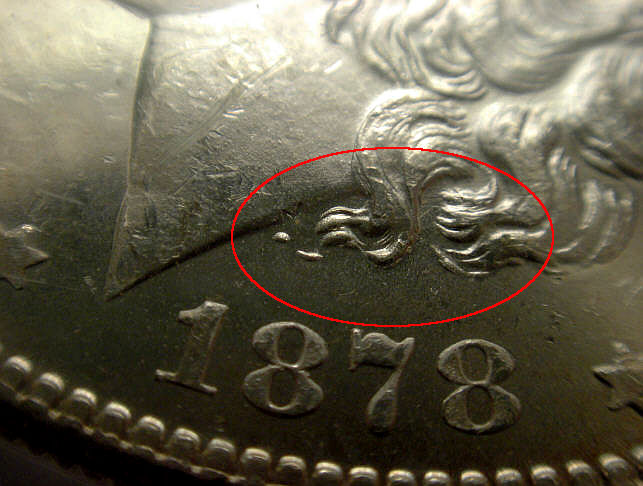 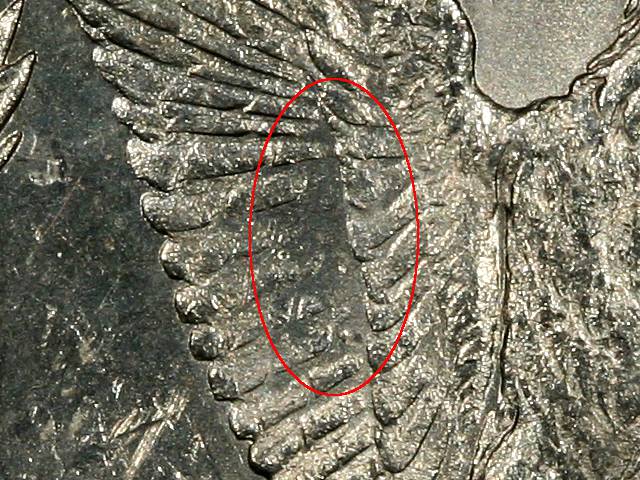 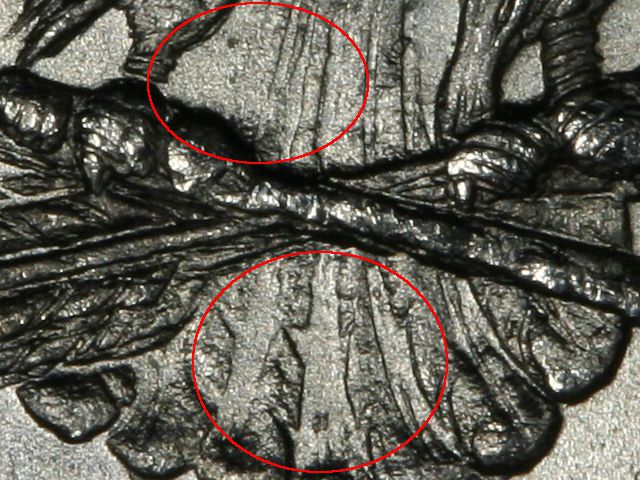 Sometimes a planchet fails to get fed into the press, and the two dies come into contact. When this happens, features from one die get transferred to the other, and these features are then impressed on the next planchets fed through. This is called "clashing," and it's very common with Morgans. The examples below show the major areas where clashing artifacts appear on Morgans:

Note, extreme examples are shown; your coin may have similar features but much weaker.

The upper red oval is the most likely place to see obverse clashing on a Morgan. This is from the top edge of the eagle's right wing. It may be more or less close to the actual chin-neck junction; positions vary due to the rotation of the reverse die. The lower circle is letter transfer, the bottoms of the "n" from "In God we trust." 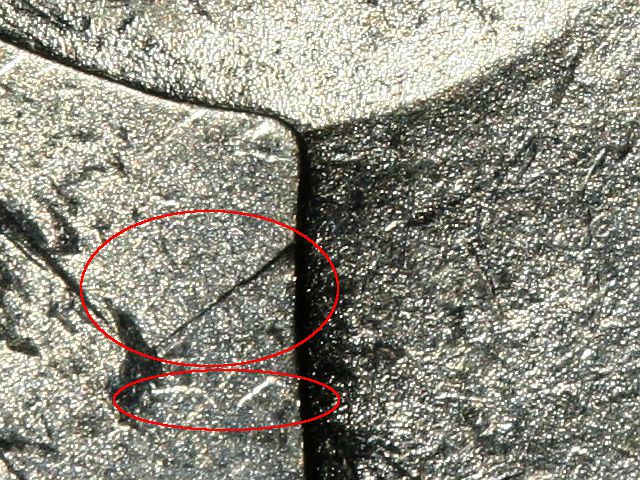 Only the strongest clashes will show transfer in the next two images. "Spikes" from the reverse wreath, at the chin: 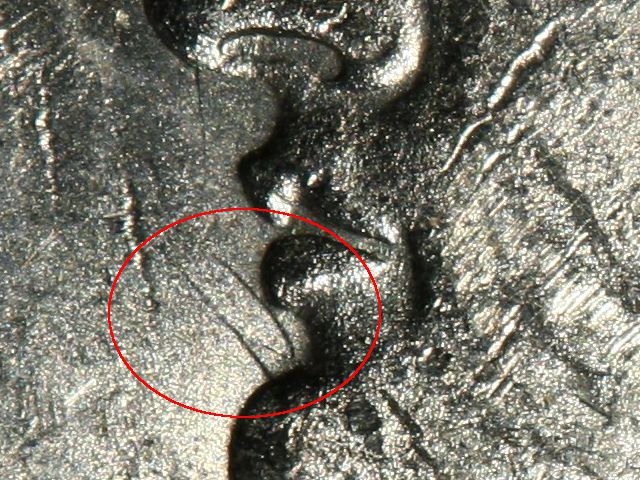 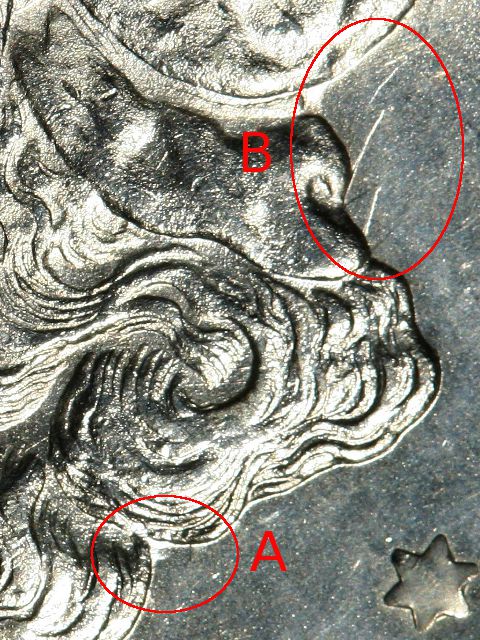 The first image is the two places where one will most commonly see clashing, from the obverse neck (above the wing) and back of the cap (next to the wreath): 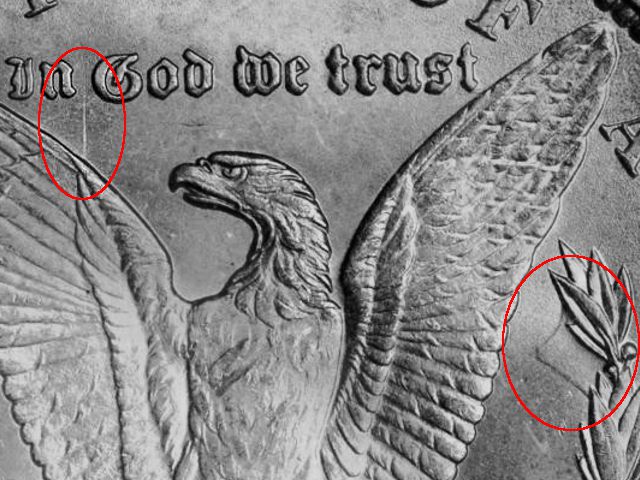 These are less-likely locations for clashing:

"A" is letter transfer from "LIBERTY." If you see this on your coin, you have something special. "B" and "C" are transfer from the front of the profile and the lips: 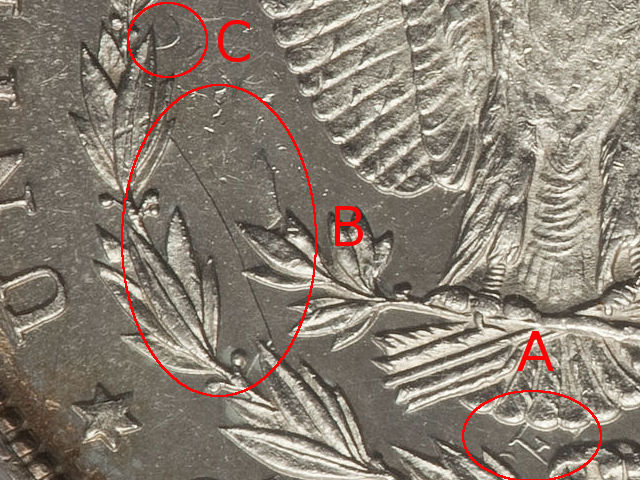 "A" is the "usual" clash. "B" is transferred detail from the obverse cotton bolls, and very uncommon: 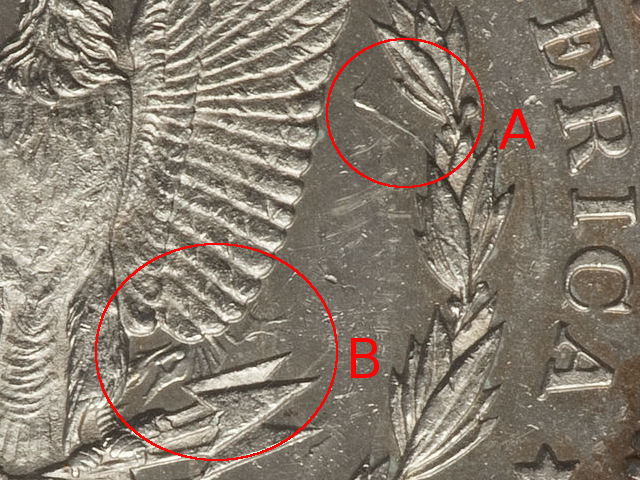