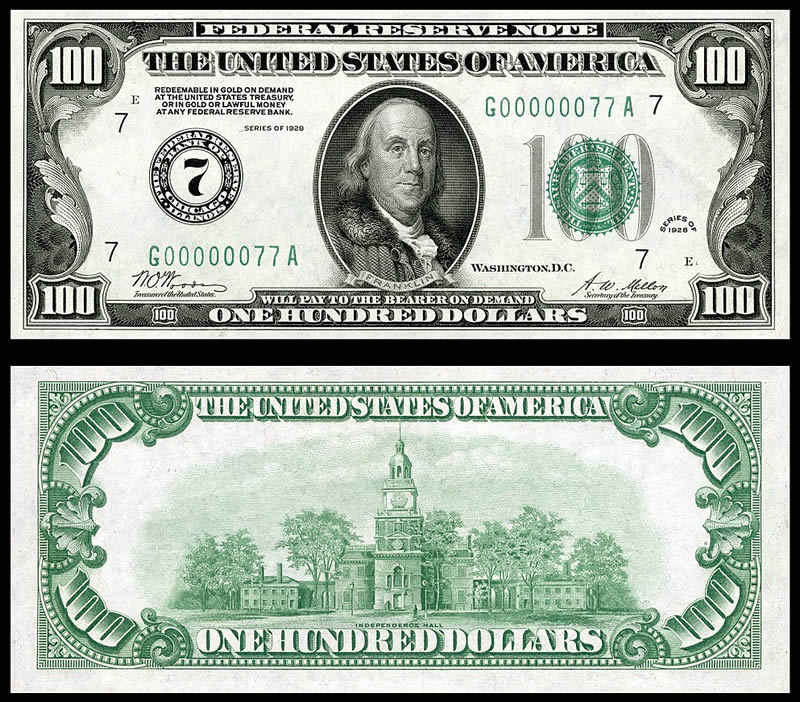 Prior to centralized banking, each commercial bank issued their own notes. The first institution with responsibilities of a central bank in the U.S. was the First Bank of the United States, chartered in 1791 by Alexander Hamilton. Its charter was not renewed in 1811. In 1816, the Second Bank of the United States was chartered; its charter was not renewed in 1836, after President Andrew Jackson campaigned heavily for its disestablishment. From 1837 to 1862, in the Free Banking Era there was no formal central bank, and banks issued their own notes again. From 1862 to 1913, a system of national banks was instituted by the 1863 National Banking Act. The first printed notes were Series 1914. In 1928, cost-cutting measures were taken to reduce the note to the size it is today.

At the time of the Federal Reserve's creation, the law provided for notes to be redeemed to the Treasury in gold or "lawful money." The latter category was not explicitly defined, but included United States Notes, National Bank Notes, and certain other notes held by banks to meet reserve requirements, such as clearing certificates. The Emergency Banking Act of 1933 removed the gold obligation and authorized the Treasury to satisfy these redemption demands with current notes of equal face value (effectively making change). Under the Bretton Woods system, although citizens could not possess gold, the federal government continued to maintain a stable international gold price. This system ended with the Nixon Shock of 1971. Present-day Federal Reserve Notes are not backed by convertibility to any specific commodity, but only by the legal requirement that they are issued against collateral.

Series 1914 FRN were the first of two large-size issues. Denominations were $5, $10, $20, $50, and $100 printed first with a red seal and then continued with a blue seal. Series 1914 and 1918 notes in the following two tables are from the National Numismatic Collection at the National Museum of American History (Smithsonian Institution).

Federal Reserve Notes are printed by the Bureau of Engraving and Printing (BEP), a bureau of the Department of the Treasury.

A Federal Reserve Bank can retire notes that return from circulation by exchanging them for collateral that the bank posted for an earlier issue. Retired notes in good condition are held in the bank's vault for future issues.

Federal Reserve Notes are made of 75% cotton and 25% linen fibers.

There are a few regulations to which the U.S. Treasury must adhere when redesigning banknotes. The national motto "In God We Trust" must appear on every banknote.

The portraits appearing on the U.S. currency can feature only deceased individuals, whose names should be included below each of the portraits.

In 2001, the Legal Tender Modernization Act was proposed which would prohibit any redesign of the $1 bill.