Silver Certificates are a type of representative money printed from 1878 to 1964 in the United States as part of its circulation of paper currency. They were produced in response to silver agitation by citizens who were angered by the Fourth Coinage Act, which had effectively placed the United States on a gold standard. The certificates were initially redeemable in the same face value of silver dollar coins, and later in raw silver bullion. Since 1968 they have been redeemable only in Federal Reserve Notes and are thus obsolete, but are still valid legal tender. 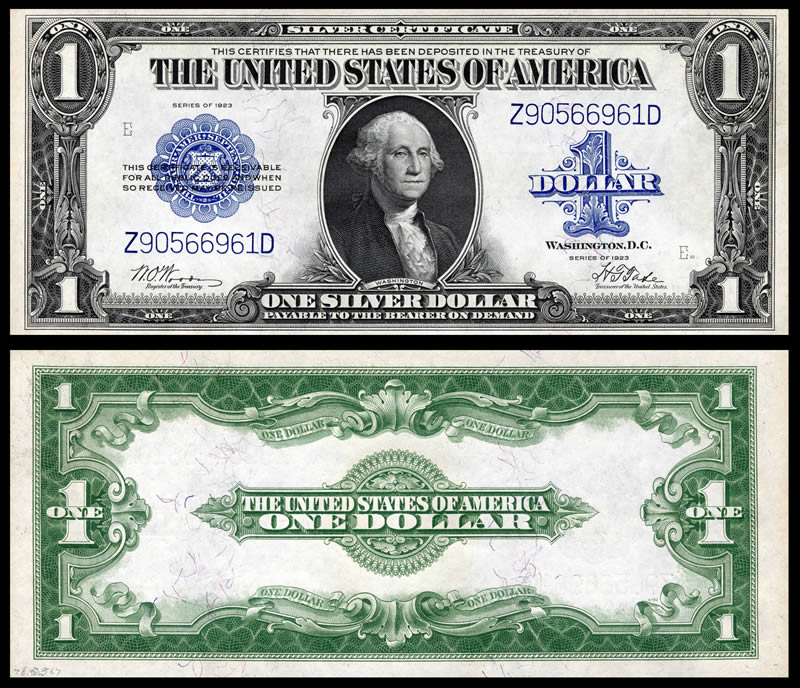 There are a few features that distinguish a Silver Certificate. The seal and serial numbers on many of the first Silver Certificates issued were red, brown, and blue. It was not until Series 1899 for the $1, $2, and $5 denominations that the seal and number colors were officially and permanently changed to blue. (This occurred at different points for denominations above $5). During World War II the government issued 1935a Silver Certificates with a brown seal for Hawaii distribution and 1935a certificates with a yellow seal for North Africa distribution. The idea was that if these areas fell into enemy hands during the war, the money could easily be identified and cancelled so as to prevent large monetary losses.

Beginning of an age

The Coinage Act of 1873 placed the United States on the gold standard, which replaced the gold and silver bimetallic standard that had been created by Alexander Hamilton. Many of the poorer citizens saw this as a "crime," and silver agitation began. The Bland-Allison Act, as it came to be known, was passed by Congress on February 28, 1878. It did not provide for the "free and unlimited coinage of silver" demanded by Western miners, but it did require the United States Treasury to purchase between $2 million and $4 million of silver bullion from mining companies in the West, to be minted into coins that would be legal tender for all debts, like gold. These coins, however, were quite heavy, so the government applied their gold certificate strategy to the silver. Suppose that there were five silver dollars in the treasury. The government would print a $5 Silver Certificate against the dollars, providing a somewhat easier medium of exchange. The idea was kept, and Series 1878 was printed in denominations of $10 to $1000.

In 1928, the United States Treasury decided to reduce the size of its currency in order to speed up transactions, and also to cut costs. By this time, the Federal Reserve had taken over much of the currency market, and the prices of gold and silver had risen greatly. For Series 1928, only $1 Silver Certificates were produced. Fives and tens of this time were mainly Federal Reserve Notes, which were backed by and redeemable in gold. All this would change, however, with the beginning of the Great Depression in October 1929. The United States was plunged into an economic disaster of profound proportions. Many citizens blamed the fluctuating price of gold, which directly affected the U.S. dollar because it was pegged to the value of gold.

President-elect Franklin Roosevelt felt the same way. He persuaded Congress to recall all gold coins, gold bullion, and gold certificates, which circulated alongside Silver Certificates. This prompted Congress to quietly place the U.S. on the silver standard. On May 12, 1933, the Agricultural Adjustment Act was passed, which included a clause allowing for the pumping of silver into the market to replace the gold. A new Series 1933 $10 Silver Certificate was printed and released, but not many were released into circulation.

In 1934, a law was passed in Congress that changed the obligation on Silver Certificates so as to denote the current location of the silver. This law also allowed the government to exchange silver bullion for the certificates, not just silver dollars. The 1933, along with its sister, the 1933A, $10 silvers, as well as the 1928 $1 silvers were phased out and replaced with certificates of Series 1934. The small-size $5 Silver Certificate was introduced with this series, as well.

In 1963 President John F. Kennedy issued Executive Order 11110, authorizing the Department of Treasury to issue additional Silver Certificates for any silver held by the U.S. Government in excess of that not already backing issued certificates.

End of the Silver Certificates

Certificates circulated, mainly in the $1 denomination, widely throughout the United States in the years following 1934. When the '34s wore out, they were replaced with a new, more modern-looking Series 1953 (1935 for the $1 silvers; see below), with the same face changes as the Series 1950 Federal Reserve Notes had experienced. However, the Silver Certificates began to disappear from circulation during the 1940s and 1950s. The amount of Silver Certificates in circulation depended directly upon the amount of silver bullion in the Treasury vaults. As people redeemed the certificates for bullion or silver dollars, the notes were shredded, because the notes had lost their backing and could not be recirculated unless there was more silver being produced. The price of silver was also rising. In 1960, it was nearing $1.29, which meant that silver dollars were worth more than $1. This meant that people would receive their silver dollars and melt them down for the bullion, thereby reducing the amount of silver in circulation, which was already falling.

In March 1964, Secretary of the Treasury C. Douglas Dillon halted redemption of Silver Certificates for Silver Dollars. In the 1970s, large numbers of the remaining silver dollars in the mint vaults were sold to the collecting public for collector value. All redemption in silver ceased on June 24, 1968.