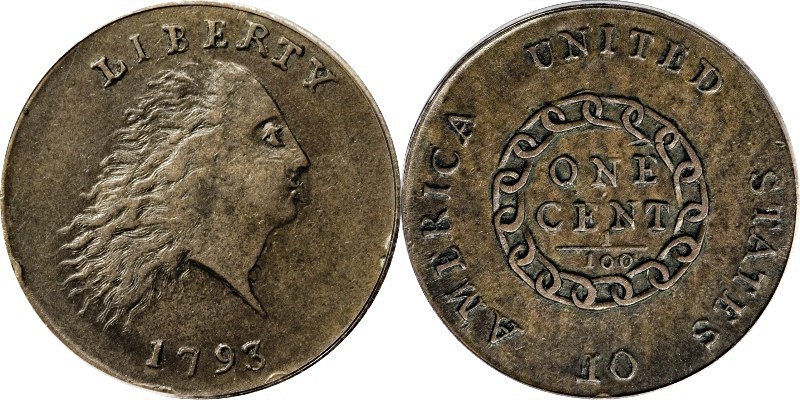 In 1793, democracy was still a struggling and unproven form of government. In France, the revolution that erupted with such force four years earlier, began the year with the beheading of Louis XVI, and that country's struggle with democracy degenerated into near anarchy with the Reign of Terror. Meanwhile, the fledgling U.S. was trying to establish its place among the sovereign nations of the world. One of the issues receiving President Washington's attention was the necessity for a solid and respectable system of coinage. To that end, he and his wife Martha donated $75 worth of silver tableware, and the famous half dismes of 1792 were struck, making "a small beginning" toward coinage, as he stated in his Annual Address in November 1792.

A case can be made that the 1792 half dismes, the silver-center cents, or the Birch cents were the first coins struck by the United States. However, the first regular coins struck by the federal government on its own machinery and within its own premises were the 36,103 Chain cents struck in the first twelve days of March of 1793. Henry Voight was responsible for designing and engraving the dies for these historic coins, and his qualifications for such a job were minimal to say the least.

Voight was a skilled operational mechanic, and was well known as a watch maker. Six months after helping demolish a whiskey still on the site of what was to be the first Mint building, Voight was ordered by mint Director Rittenhouse to place into effect his "plan" which included designing, engraving, and striking pattern cents. One was designed by him at the urging of Thomas Jefferson, the famous silver-center cent. It was this design that served as the model for the Chain cent of 1793.

Despite his lack of experience as a die cutter, Voight did at least realize the limitations of the medium in which he had to work. With the small hand presses then in use, if the central device of Liberty was to have any appreciable relief, then the reverse design had to have a simple layout with much open space in the fields. The head of Liberty and chain device on the reverse was well suited to these needs.

The chain design was simple enough and is easily the most successful element on the coin. Its fifteen interlocking links form an unbroken chain, with the words ONE CENT and the fraction 1/100 inside. The chain device was an obvious allusion to the interconnectedness of the states in the Union. This same device had previously been used on Continental Currency to signify the common, shared cause of the 13 rebellious colonies. It had more recently been seen on the widely circulated Fugio cents of 1787, which makes the public reaction of 1793 all the more difficult to understand.

Many people associated the chain device with the chains of slavery. Numerous specimens were struck from clashed dies, a minting problem that occurs when the obverse and reverse dies clash with each other without a blank planchet between them, leaving an impression of the obverse on the reverse and vice versa. Coins struck thereafter will show an impression of both obverse and reverse on each side. One contemporary critic who referred to "Liberty in chains" was likely referring to die clashed coins which would show traces of the chain in front of Liberty's neck and face.

The obverse design was open to criticism, not over the symbolism represented by the figure of Liberty, but for purely aesthetic reasons. Respectable women in the late 18th century had neatly coiffed hair, quite unlike the disheveled look seen on the figure of Liberty on the Chain cent. Various contemporary observers accused Ms. Liberty of having a look of madness or savagery. It was undoubtedly the universally disapproving comments that the Mint received and Voight took personally, that resulted in his assigning the task of cutting the dies for the next cent design (the Wreath cent) to a Mint employee who had true artistic talent, Adam Eckfeldt.

The die steel used to produce the Chain cents was of poor quality, and four obverse dies were used with three reverse dies. The most famous variety in the series has the word AMERICA abbreviated as AMERI. on the reverse. This is a highly prized coin as it is considered the first variety struck of the first regular issue produced in the United States Mint. Probably no more than 1,500 to 2,000 Chain cents may actually survive today. Many of these are impaired, low grade coins, and there may only be ten or so known today in mint condition, with a dozen in AU, and perhaps as many as 35 in XF condition.

While 1793 was decades before regular proofs were struck, there is one Chain cent that most experts agree is definitely a prooflike presentation piece. To early copper aficionados, this piece is known simply as "The Coin!" It was struck on a very broad planchet, and it appears that more than one blow from the dies was used to bring up the extra detail on this magnificent coin. It has been owned by the most illustrious group of copper collectors of each generation since its manufacture. The pedigree for this most famous Chain cent began with the father of coin collecting in this country, Joseph Mickley. It has also been in the collections of Sylvester Crosby, Dr. Hall, Virgil Brand (the beer magnate), Henry Clay Hines, Dr. Sheldon (who wrote the standard reference on early coppers), and R.E. Naftzger.

Grading Chain cents can be especially tricky for the novice as the device of Liberty was punched into the die more shallowly than the chain on the reverse. As a result, on coins that have the obverse virtually worn smooth, the reverse will still show complete chain detail. On coins in grades between Very Good and Extremely Fine, remaining hair detail on Liberty is the most important factor in establishing the coin's grade, in addition to the overall preservation of the surfaces. Counterfeits are mostly high grade electrotypes. They can be very difficult to detect, and authentication of any Chain cent is highly recommended.

Today, Chain cents are among the rarest and most beloved of all United States coins. It is virtually impossible for 20th century collectors to look at one today with the same lack of appreciation expressed by 18th century viewers. The Chain cent is indeed a coin whose numismatic importance and rarity far outweighs any concerns that may have been expressed in previous centuries about its design and aesthetic appeal.