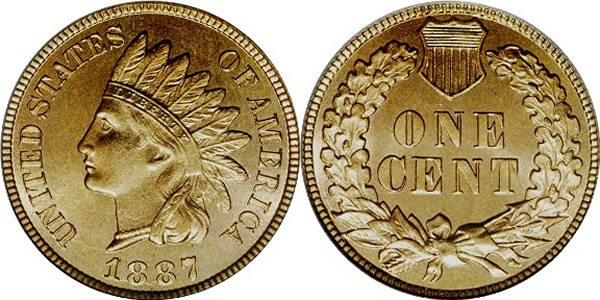 The shots at Fort Sumter that launched the Civil War didn't ring out until April 12, 1861, but preparations for war were under way well before that including economic preparations. Anticipating the conflict, jittery Americans on both sides of the Mason-Dixon Line began hoarding gold and silver coins. The pace of this activity accelerated following the election of Abraham Lincoln to the presidency in November of 1860, for he was perceived as a hard-line Unionist unlikely to compromise with southern politicians. It reached fever pitch after Dec. 28, 1861, when New York banks suspended specie payments. At that point, precious-metal coins all but disappeared from circulation.

Not being made of precious metal, cents continued to circulate. In fact, it seemed inconceivable that Americans would hoard cents. The large, intrinsically valuable copper cents used since the start of the nation's coinage were replaced in 1857 by the smaller copper-nickel Flying Eagle cents , fiat issues, worth less as metal than as money. That was unusual in the mid-19th century; most U.S. coins had high intrinsic value, and Americans had come to expect and even demand this in their coinage. Nonetheless, the public had welcomed the large cents' demise, considering the coins too cumbersome for ordinary use.

The new small cents, known as "white cents" because of their pale color, became even more popular in 1859 when, due to striking problems, the Mint replaced the original Flying Eagle design with a new one depicting a female clad in a feathered Indian headdress. This "Indian Head" portrait, not a native American profile but apparently modeled after the Greco-Roman statue Venus Accroupie, had widespread appeal, reinforcing the acceptance the white cents already enjoyed because of their handy size.

Production levels were high, far higher than those of the large cents they replaced, and it was common knowledge that the metal in each coin was worth less than one cent. But the Civil War shattered many accepted beliefs, including the perception that small-size, low-value cents were immune from hoarding.

Initially, bags of cents served as one of the primary means of payment for harried merchants. Before long, however, they also became a target for hoarders. They were, after all, government-issue coins, and as such were preferable to the all-but-irredeemable "shinplasters" (scrip and wildcat bank notes) being widely offered. Furthermore, the price of nickel, fueled by wartime demand, was rising quickly, giving these nickel-alloy coins greater intrinsic value. By December 1862, cents had joined gold and silver coins on the shelf.

That was when necessity gave birth to invention, not by Uncle Sam but by private entrepreneurs. To fill the vacuum left by the departure of federal coinage, merchants and promoters began producing cent-sized bronze tokens, generally bearing an implied or even explicit promise of redemption in goods, services or money. These "Civil War tokens" gained broad acceptance as a money substitute. Mint officials were duly impressed, and in 1864 they reshaped the cent in these tokens' image, replacing the copper-nickel "white cent" with a slimmed-down version made of bronze.

Besides being darker in color, the new cent was one-third lighter in weight. Its diameter was unchanged, however, and it still bore the same Indian Head obverse design and simple wreath and shield reverse fashioned for its predecessor by the Mint's chief engraver, James B. Longacre. The new coin's components were less expensive than nickel, and this combined with its lower weight made it much cheaper to produce. It was also easier to strike, as bronze is much softer than nickel. And like the tokens it successfully replaced, it enjoyed ready acceptance from the public, effectively ending the shortage of cents in circulation. Both kinds of cents were issued in 1864, with the bronze outnumbering the copper-nickel by about 3-to-1. Despite its higher mintage, the bronze cent provided the year's scarcest variety: one on which Longacre's initial "L" appears on the ribbon of the Indian's bonnet. The designer didn't add this until late in the year, so relatively few 1864 cents have it. Apparently, a large quantity of these "L" cents went to England, for many pieces were recovered from there in the 1950s and 60s.

Bronze Indian cents remained in production without interruption for nearly half a century before giving way to the Lincoln design in 1909. The design remained the same for the entire run except for minute changes in 1886, when the then Chief Engraver, Charles Barber, slightly lowered the relief and made a small change in the position of the last headdress feather. For all but the last two years, Indian Heads were struck only at the main mint in Philadelphia; in 1908 and 1909, the San Francisco branch struck cents, both times in very limited quantities. On these, the "S" mint mark appears below the wreath on the reverse.

Mint state examples exist in substantial quantities in grades up to MS-65, but their population drops sharply in MS-67 and above. Full red coins, of course, are rarer still. Although the series is relatively long, it encompasses just 51 pieces, even including 1864 L, 1869/9 and the open-3 and closed-3 cents of 1873, because there are only two branch-mint issues. Given this, and the limited number of high-priced rarities, many collectors assemble complete date-and-mint sets. The series remains one of the most popular of all United States issues.