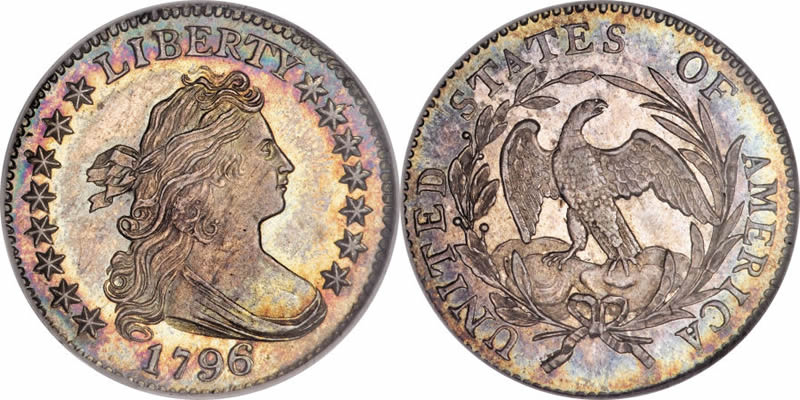 At the end of the 18th century, the country was just beginning to grow. Vermont achieved statehood in 1791, followed by Kentucky the next year. The western frontier was still in the eastern half of the continent, stretching from Alabama to the Ohio Valley, but that would change dramatically in the coming decade with the addition of the vast Louisiana Territory. Population growth continued to explode, fueled in part by a flood of immigrants from war-torn Europe. By 1796, another territory, Tennessee, had enough permanent residents to be admitted to the Union as the sixteenth state.

Carrying on the tradition of recognizing each new state, the U.S. Mint's Chief Engraver, Robert Scot, added a sixteenth star to the coinage dies. But it didn't take long for Mint Director Elias Boudinot to realize that as the country grew, this practice would soon get out of hand. He ordered the number of stars reduced to a more manageable thirteen, symbolizing the original colonies. While only a slight adjustment, it demonstrated just how concerned Mint officials were about the appearance of the nation's coins at the time. The new edict served a practical purpose as well, for fewer stars meant fewer die punchings, as each device was placed separately into the dies by hand.

Mint employees had been under a lot of pressure since the very beginning. Congress considered abandoning the idea of a federal mint even before it opened. There were always quality problems, both in design and execution. After the 1793 Chain cent was so severely criticized, officials became exquisitely sensitive to public opinion. They quickly realized that the new nation's coins must not only be of proper weight and fineness, but must also look as solid and respectable as their European counterparts. To that end, Scot began to rework the coinage designs.

There were limitation however, to how much of an improvement could be accomplished. After all, Scot's talents as an engraver and die-sinker were modest at best, and it was his designs that were receiving much of the criticism in the first place. But a facelift was in the cards, and as Chief Engraver, it was Scot's show.

His Draped Bust/Small Eagle dimes, first introduced in 1796, were based on a drawing by noted portraitist Gilbert Stuart. The coin featured a draped bust of Liberty flanked by thirteen stars, six right, seven left. Although somewhat crude and certainly unfashionable by today's standards, the matronly bust was well suited to contemporary tastes: It was supposedly modeled after Mrs. William Bingham, a socialite who was considered the most beautiful and charming woman in Philadelphia. The reverse of the coin, however, was another matter. Its scrawny, hatchling eagle was widely disliked. In 1798, Scot replaced the small eagle with the scaled down version of the Great Seal of the United States that was first seen on the quarter eagle of 1796. This depicted a heraldic eagle with the Union Shield on its breast and a ribbon inscribed E PLURIBUS UNUM in its beak. Judging from the lack of negative comment, this new Draped Bust/Heraldic Eagle combination obviously came closer than the previous design to satisfying the objections of critics.

All dimes of this type were struck at the Philadelphia Mint. Eight years are represented in the series (no dimes were made bearing the dates 1799 or 1806), with production totaling only 422,010 pieces. The most plentiful dates, accounting for more than 65% of the total mintage, are the last two, 1805 and 1807. The rarest issues are the 1798 with a 13 star reverse and the low mintage 1804.

Even though short lived, the series has many varieties, an inherent problem of issues produced with the relatively crude technology of the Mint's early years. Major and minor design variations include overdates, differing sized date punches, thirteen and sixteen star reverses and four and five berry reverses. Curiously, the "Redbook" lists fourteen date and variety combinations, "Breen" lists seventeen and the bible of avid dime variety collectors, Early United States Dimes 1796-1837, lists twenty-one. So, depending on your aspirations, it's possible to have a "complete" set of Draped Bust/Heraldic Eagle dimes with anywhere from eight pieces (one for each year issued) to twenty-one pieces (the number of varieties recognized by advanced specialists). Generally, variety devotees and date collectors pursue coins in VF to XF grade, while type collectors seek pieces AU or better. Mint state specimens are quite rare, but examples dated 1805 or 1807 are available with some frequency.

An explanation is in order for the rare thirteen star variety of 1798. It seems that economy took precedence over all other considerations during this time. Even though thirteen stars had been mandated in 1797, before the Heraldic Eagle reverse appeared on the dime, unworn sixteen star reverse dies from the 1797 quarter eagle were used for the bulk of 1798 dime production. With less than a millimeter difference in the size of the two coins, the two dies were interchangeable, and serviceable quarter eagle reverse dies would be used to strike dimes in several years.

Grading this design can be especially challenging. Striking details are often weak or non-existent in certain areas, particularly for the 1807 issue. This weakness in strike can make a high grade (XF or better) coin appear to have more wear than it actually does, in which case the coin's grade must be determined by the amount of remaining mint luster. Wear first shows on Liberty's hair above the ear and at the forehead. On the reverse, the high points are the shield, head, tail and top edges of the wings. There are some readily identifiable lightweight counterfeits dated 1800, but counterfeits are not a particular problem with this series. Ironically though, it was the issue of counterfeiting that would ultimately lead to the demise of the design.

Mint officials were continually striving for uniformity among coins as a means to discourage counterfeiting. With engraver John Reich's arrival at the Mint in 1807, more progress was made in that direction. Reich succeeded in reducing the number of individual operations needed for each working die. The Heraldic design required between 34 and 37 design elements to be added by hand. With Reich's new Capped Bust design introduced in 1809, the number dropped to 24, an obvious savings in labor, and the coins were more uniform, therefore harder to counterfeit successfully. Production was greatly increased, as a quick glance at the mintages for the Capped Bust series will show.