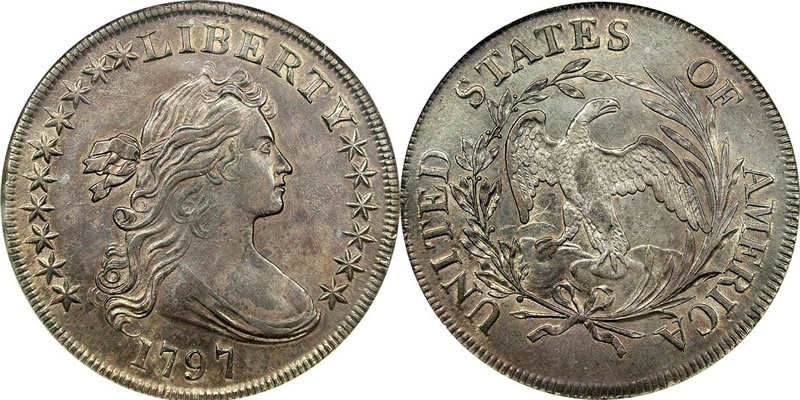 A precocious country during its formative years, the United States grew quickly in size and stature throughout its first half-century as an independent nation. It didn't reach maturity nearly as fast, however, as the likeness of Miss Liberty on U.S. silver coinage.

When Liberty first appeared on the nation's silver coins in 1794 she was youthful and vivacious, with her hair flowing freely behind her. Focusing on that feature, collectors refer to these coins as the Flowing Hair type. But it didn't take long for this innocent- looking maiden to reach the full flower of womanhood: The very next year a new portrait showed her, in the words of coinage critic Cornelius Vermeule, as "a buxom Roman matron" having long, elegant tresses neatly tied back with a ribbon and a bow and ample cleavage visible above a fold of drapery.

This full-figured portrait has come to be known as the Draped Bust design, and it holds a significant distinction: It appears on the obverse of the 1804 silver dollar, one of the most famous and most valuable U.S. coin rarities.

For a time, the Draped Bust portrait graced all five silver coins then being issued: the dollar, half dollar, quarter, dime and half dime. The dollar got the jump on all the others, though, receiving this design partway through production in 1795. It didn't make its debut on the other four coins until 1796.

Selection of the dollar as the new design's first showcase underscored the primacy of that coin. The dollar was the cornerstone of the monetary system devised by the Founding Fathers, and the $1 coin was not only the largest silver issue but, in the view of officials overseeing the Mint, the most prestigious as well as most important. They had made that clear in 1794 when they chose to have dollars struck before anything else at the outset of silver coinage, only then giving the go-ahead for the smaller silver pieces.

Replacement of the short-lived Flowing Hair design coincided with a change in leadership at the Mint. David Rittenhouse resigned as the Mint's first director at the end of June 1795, and his successor, Henry William DeSaussure, set out at once to improve the designs of all the denominations, particularly those struck in silver.

Possibly at the urging of President George Washington, DeSaussure engaged portraitist Gilbert Stuart to fashion a new design for the silver coins. Stuart prepared a drawing of the Draped Bust figure, reportedly basing the portrait on Philadelphia socialite Ann Willing Bingham, said to be the most beautiful woman of her time. This sketch was translated to plaster by artist John Eckstein of Providence, Rhode Island, and the dies were executed by Mint Chief Engraver Robert Scot.

Though the Flowing Hair portrait of Liberty was retired, the Mint kept the reverse essentially the same. It features a small, naturalistic eagle encircled by a wreath, with UNITED STATES OF AMERICA inscribed around the border. On the Draped Bust coinage, this "Small Eagle" reverse does reveal subtle refinements: The eagle seems more graceful, for example, and it's perched upon a cloud instead of a rock (as had been the case on the Flowing Hair coinage). In addition, the wreath has been modified: The previous laurel branches have given way to branches of palm and olive. LIBERTY and the date are the only inscriptions on the obverse. Lettering on the edge proclaims the statement of value: HUNDRED CENTS ONE Dollar OR UNIT, with decorations separating the words.

The entire first-year production of Draped Bust silver dollars took place in the last two weeks of October, 1795 and totaled a modest 42,738 pieces. That's barely one-fourth the mintage of 1795 Flowing Hair dollars; some 160,000 of those had been struck earlier. Nonetheless, both types historically have commanded comparable premiums. The Flowing Hair dollar benefits from its wide appeal as a type coin: That series was made for only two years, and the 1794 is a major rarity, so the 1795 is the only realistic option for most buyers.

The Draped Bust/Small Eagle dollar didn't last much longer. It remained in production for only four years, from 1795 to 1798, before the small eagle was replaced by a large, heraldic eagle. The Draped Bust portrait retained its spot on the obverse until production of dollars was suspended in 1804 because of heavy melting. When dollar coinage resumed in 1836, the obverse bore a new Seated Liberty portrait.

Although the series is short, Draped Bust/Small Eagle dollars come in more than a dozen major varieties. Some of these distinctions are based on the size of the date and the inscriptions. Most of the varieties, however, are tied to the number of stars on the obverse and the way they are arranged. There were 15 stars in the first two years, representing the number of states in the Union at the time. With Tennessee's admission, the number rose to 16 in 1797. Then, in 1798, it dropped back to 15 (apparently because old dies were being used) before ending up at 13 for the 13 original colonies.

Only about 450,000 Draped Bust/Small Eagle dollars were issued in the four years combined, nearly three-fourths of them in 1798. Noted scholar Walter Breen estimated that just 3 percent survive. The low point came in 1797, when a mere 7,776 were produced. The rarest variety is the 1797 dollar with 9 stars to Liberty's left, 7 to her right and small letters. The low production figures are understandable, given the fact that during the 1790s a dollar represented a full day's pay for some Americans and a living wage, at that.

Proofs weren't struck officially for this series, but a few presentation pieces are prooflike. These dollars are scarce and highly collectible even in lower circulated grades and are rare in mint condition. Points to check for wear are the hair above Liberty's forehead and the crest of the eagle's breast. Although the series is short, it is generally collected by type because each component is so scarce.