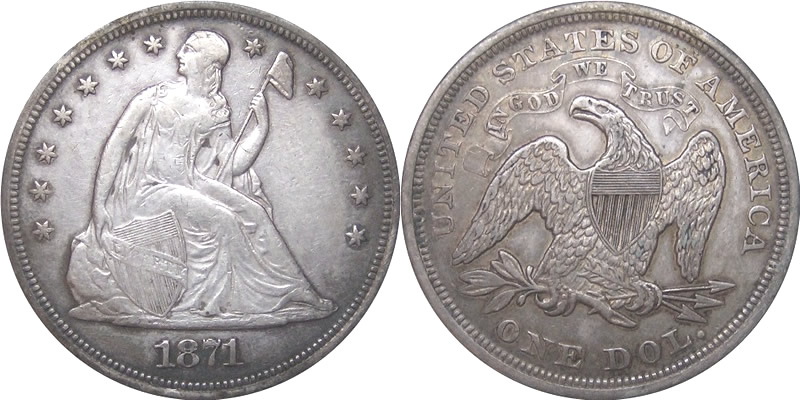 As war clouds gathered and the nation raced headlong toward civil war, public sentiment became increasingly philosophical. In 1861, reflecting this national mood, Secretary of the Treasury Salmon P. Chase seized upon a suggestion from a Pennsylvania minister that the Mint ought to incorporate recognition of the deity on our coins. In a letter to James Pollock, Director of the Mint, Chase wrote: "The trust of our people in God should be declared on our national coins. You will cause a device to be prepared without unnecessary delay with a motto expressing in the fewest and tersest terms possible this national recognition."

Almost immediately, Pollock struck a few patterns and forwarded them to Chase. In his accompanying letter, Pollock asserted that the first suggestion for this religious motto, "Our Trust is in God," had too many characters to fit comfortably. The Mint Director recommended "God Our Trust" since he felt it carried the same idea and was more concise. He also preferred the motto to be placed on the reverse above the eagle, within a scroll or ribbon device as an artistic backdrop.

Pattern half dollars and eagles dated 1861 and 1862 have the words GOD OUR TRUST. From 1863 through 1865, additional patterns were made using GOD OUR TRUST, GOD AND OUR COUNTRY, and IN GOD WE TRUST. It was IN GOD WE TRUST that Secretary Chase finally approved in 1864. It first appeared on the two-cent piece in that year and then later on the Shield nickel in 1866. Patterns dated 1865 with IN GOD WE TRUST were made of the double eagle, eagle, half eagle and the silver quarter, half dollar and dollar. Ultimately, the Mint Act of March 3, 1865 provided the authorization for use of the motto on the regular silver and gold issues.

The Seated Liberty dollar of 1866, identical to previous issues except for the addition of the motto, was based on the original design by Christian Gobrecht, the former Chief Engraver of the Mint. First used on regular issue coins with the 1837 dime, it was applied to the dollar in 1840. The design depicts Liberty seated on a boulder. She is holding a pole in her left hand topped with a liberty cap. With her right hand she supports the shield of the union inscribed with the word LIBERTY. Thirteen stars surround the figure. The reverse features an eagle with outstretched wings and the Union shield on its breast. The eagle is grasping an olive branch and three arrows. The legend UNITED STATES OF AMERICA appears in a semicircle around the eagle, and the denomination ONE DOL. appears below. If a particular coin has a mintmark, it is directly under the eagle.

The design has powerful symbolism. With the use of the liberty cap, it declares freedom. The union shield is symbolic of the unity of the nation. In the throes of the worst conflagration this country ever experienced, it was natural for the people of the mid-19th century to turn to the deity for help and guidance. Placing a religious sentiment on something as familiar as a coin was the equivalent of a national prayer.

The motto has become very much a part of the American psyche. This was evident when the double eagle and eagle were issued without the motto in 1907. It caused an immediate public controversy, and Congress ordered the motto restored in 1908.

Although "with motto" dollar mintages were small, the coins were well used by the public. This accounts for the small number of uncirculated pieces that exist. Only about 3.6 million pieces were minted along with 6,060 proofs. There are 15 regular and eight proof issues. The majority were made at the Philadelphia Mint with only two branch mints producing the "with motto" type. Of the Carson City Mint issues of 1870, 71, 72 and 73, the 1870-CC is the easiest to locate. There are also three San Francisco issues. The 1870-S is a major rarity, and the 1873-S, with a reported mintage of 700, is unknown in any collection. That leaves the 1872-S as the only collectable "with motto" dollar from that mint. The Philadelphia issues of 1871 and 1872 are the dates most often seen and are popularly collected as type examples.

When grading mint state pieces, note that this coin often comes with some parts of the design softly struck and may have many "bag" marks and abrasions. Check the high points of Liberty's right leg and breast and the hair above her eye for signs of wear. Seated Liberty dollars may be seen with a deep patina that can range from lightly mottled to black. Heavily toned specimens should be carefully evaluated to determine whether evidence of circulation is hidden underneath.

Numismatists generally collect this coin as a "type", because it is difficult to find affordable examples of many dates in this series. A basic collection would have an example of the "no motto" and "with motto" types. One could also include an expensive, but obtainable, Gobrecht pattern or circulation issue of 1836-1839. But no matter which type, grade or date you own, any Seated Liberty dollar is a numismatic treasure.

In February, 1873 Congress passed the Coinage Act later known as "The Crime of `73," which effectively demonetized silver and put the nation on a gold standard. It would fuel intense debate for the next quarter century. While the Act created a new Trade dollar for use in commerce with the Orient, it abolished the regular issue silver dollar, along with the two-cent piece, the silver dime and the half dime. The silver dollar would not return until 1878, when it reappeared with a new design named for its creator, Chief Engraver George T. Morgan.