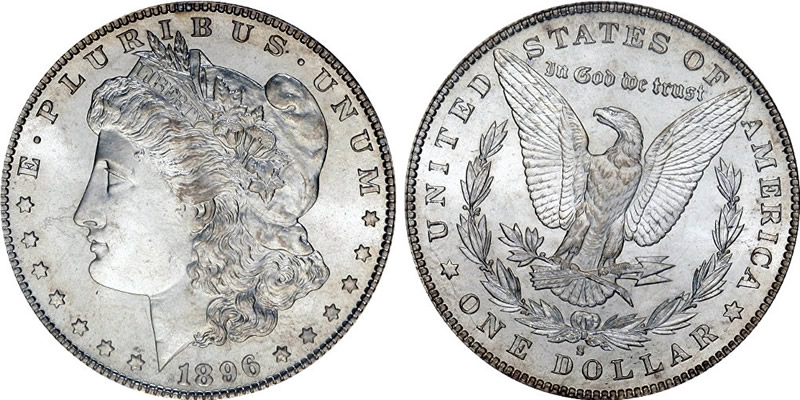 Political pressure, not public demand, brought the Morgan dollar into being. There was no real need for a new silver dollar in the late 1870s; the last previous "cartwheel," the Liberty Seated dollar, had been legislated out of existence in 1873, and hardly anyone missed it.

Silver-mining interests did miss the dollar, though, and lobbied Congress forcefully for its return. The Comstock Lode in Nevada was yielding huge quantities of silver, with ore worth $36 million being extracted annually. After several futile attempts, the silver forces in Congress led by Representative Richard ("Silver Dick") Bland of Missouri finally succeeded in winning authorization for a new silver dollar when Congress passed the Bland-Allison Act on February 28, 1878. This Act required the Treasury to purchase at market levels between two million and four million troy ounces of silver bullion every month to be coined into dollars. This amounted to a massive subsidy, coming at a time when the dollar's face value exceeded its intrinsic worth by nearly 10%.

In November 1877, nearly four months before passage of the Bland-Allison Act, the Treasury saw the handwriting on the wall and began making preparations for a new dollar coin. Mint Director Henry P. Linderman ordered Chief Engraver William Barber and one of his assistants, George T. Morgan, to prepare pattern dollars, with the best design to be used on the new coin. Actually, Linderman fixed this "contest" in Morgan's favor; he had been dissatisfied with the work of the two Barbers William and his son, Charles, and in 1876 had hired Morgan, a talented British engraver, with plans to entrust him with new coin designs. At that time, resumption of silver dollar coinage was not yet planned, and Morgan began work on designs intended for the half dollar. Following Linderman's orders that a head of Liberty should replace the full-figure depiction then in use, Morgan recruited Philadelphia school teacher Anna Willess Williams to pose for the new design.

Morgan's obverse features a left-facing portrait of Miss Liberty. The reverse depicts a somewhat scrawny eagle which led some to vilify the coin as a "buzzard dollar." The designer's initial M appears on both sides a first. It's on the truncation of Liberty's neck and on the ribbon's left loop on the reverse. Mintmarks (O, S, D, and CC) are found below the wreath on the reverse. Points to check for wear on Morgans are the hair above Liberty's eye and ear, the high upper fold of her cap and the crest of the eagle's breast.

Soon after production began, someone advised the Mint that the eagle should have seven tail feathers, instead of the eight being shown, and Linderman ordered this change. As a result, some 1878 Morgan dollars have eight feathers, some seven and some show seven over eight. The seven-over-eight variety is the scarcest, though all are fairly common.

More than half a billion Morgan dollars were struck from 1878 through 1904, with production taking place at the main mint in Philadelphia and the branches in New Orleans, San Francisco and Carson City. Carson City production was generally much lower and ended altogether after that branch was closed in 1893. The coin came back for one final curtain call in 1921, when more than 86 million examples were produced under the terms of the Pittman Act at Philadelphia, San Francisco and Denver but that was a double-edged sword: Under the 1918 legislation, more than 270 million older silver dollars, almost all Morgans, had been melted. The law required replacements for these, but most were of the Peace design, which replaced the Morgan version at the end of 1921.

In all, some 657 million Morgan dollars were produced in 96 different date-and-mint combinations. Hundreds of millions were melted over the years by the government under the Pittman Act and the Silver Act of 1942, and by private refiners since the late 1960s, when rising silver prices made this profitable. Despite all the melting, Americans had more than enough Morgans to fill their daily needs, since the dollars circulated regularly only in the West. As a result, huge stockpiles remained in the Treasury's vaults, as well as bank vaults nationwide. This explains why so many Morgan dollars are so well preserved today despite their age; few saw actual use.

Even as the numismatic hobby underwent rapid growth beginning in the 1930s, interest in other collecting areas far outpaced the attention paid to the large Morgan cartwheels. Most collectors preferred the lower face-value coins (with their lower cost) that were readily available in circulation. Although it was possible to order silver dollars through banks or directly from the Treasury, few noticed or cared. In the late 1930s, however, several Washington dealers learned that the Treasury Department's Cash Room near the White House was paying out uncirculated Carson City dollars coins having a market value of $5 or more at the time! More than a few dealers quietly exploited this discovery throughout the 1940s and `50s.

In the early 1960s, with silver rising in price, opportunists recognized the chance to turn fast profits by redeeming silver certificates for dollar coins mostly Morgans at the Treasury. By the time the government closed this lucrative window in 1964, only 2.9 million cartwheels were left in its vaults, almost all of them scarce Carson City Morgans. These were dispersed by the General Services Administration in a series of mail-bid sales from 1972 through 1980, earning big profits for the government and triggering great new interest in silver dollars.

Interest in Morgans was further heightened by the publicity surrounding the 400,000+ dollars found in the basement of Nevada eccentric LaVere Redfield's home. After word leaked out of the amazing cache, several dealers got into the act, each jockeying for position in a scramble that ultimately ended with a Probate Court auction held in January of 1976. At that sale, A-Mark Coins of Los Angeles captured the hoard with a winning bid of $7.3 million. The coins were cooperatively marketed by a number of dealers over a period of several years. Rather than depressing prices, the orderly dispersal of these coins only served to bring more collectors into the Morgan dollar fold. Similarly, the early 1980s witnessed the equally successful distribution of the 1.5 million silver dollars in the Continental Bank hoard.

The Morgan dollar's story is a Cinderella tale: Until the 1960s, it was largely ignored by the public. Since then, it has gradually become among the most widely pursued and desired of all U. S. coins. Although many collectors find the challenge of assembling a complete date and mintmark set in Mint State compelling, others satisfy themselves with collecting just one coin per year. Exceptional specimens are also sought after by type collectors.

Few coins in U.S. history have been greeted with more indifference at the time of their release than this silver dollar. And few, if any, have then gone on to stimulate such passionate excitement among collectors.