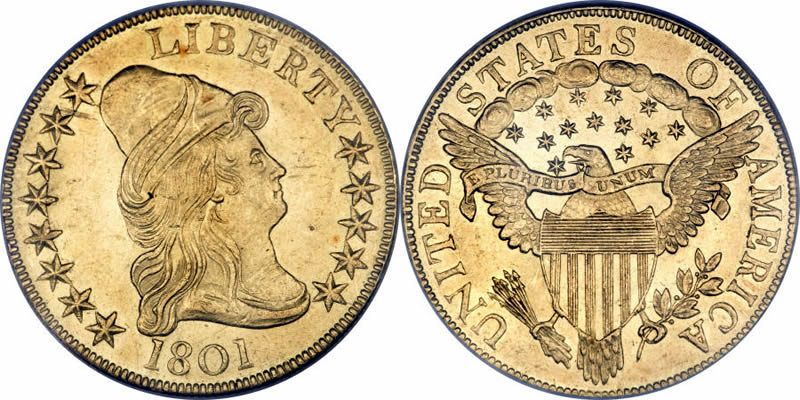 Old habits die hard. After renouncing almost a thousand years of kings and queens, banners and lineage, the founders of the United States of America went searching for a symbol of national heritage. Ironically, the one they adopted had its roots deep in the class structure of the Old World, a heraldic symbol, or coat of arms, dating from the knights and nobility of 12th-century Europe.

With their faces covered by helmets, medieval knights wore identifying emblems or symbols on the tunics covering their armor, giving rise to the expression `coat of arms.' After the Crusades, the concept of heraldry spread throughout Europe, adopted by both noble and patrician classes, and later by lawyers, companies, colleges and towns. European countries adopted the practice of placing heraldic shields on the reverse of their coinage. `Scudo,' the word for shield, even became a denomination of gold currency, as in `scudo de oro.' Heraldic symbols on coinage were soon used all over the world.

The first precious metal coinage from the U.S. Mint, however, presented no such symbol, only depictions of the national bird, a naturally posed American bald eagle. These coins received widespread criticism, however, with the bird gracing their reverses derided as either a "scrawny eagle" or a "turkey cock." As officials pondered the poor reception afforded the designs, the preference shown by both Americans and Europeans for the more familiar coins of Old World origin was also on their minds. Adopting a heraldic motif would at once make U.S. coins more acceptable from both an artistic and practical standpoint. The closest thing the republic had to a coat of arms was the eagle on the Great Seal of the United States. Designed by William Barton, a Philadelphia lawyer and numismatist, the Great Seal was adopted by both the Continental Congress of 1782 and the U.S. Congress of 1789. Primarily used on treaties and other diplomatic documents, its heraldic design would make its first appearance on the quarter eagle of 1796, and next on the eagle, in 1797.

As Chief Engraver of the United States Mint since late 1793, Robert Scot was charged with adapting the Great Seal to coinage use. His Capped Bust obverse design used on the eagle since 1795, with its bust of Liberty in a cloth cap, facing right, continued unchanged. The inscription LIBERTY appeared above the bust with the date below. Scot's new reverse featured a cruder and less regal bird than that on the Great Seal, and to many, was artistically inferior to the small eagle on the earlier coins. Scot's bird, with the Union Shield on its breast, holds thirteen arrows and an olive branch in its claws, with a scroll inscribed E PLURIBUS UNUM in its beak. Above the eagle are thirteen stars enclosed by an arc of clouds, with UNITED STATES OF AMERICA surrounding the border. While Scot's design has both admirers and detractors, he did make one obvious technical error: He placed the arrows, symbolizing armed might, in the eagle's right (dexter or honorable) claw, and the olive branch of peace in the left (sinister) claw, reversing the placement seen on the Great Seal and heraldically conveying a warlike message rather than one of peace. Whether this was an honest mistake or a reflection of his hawkish sentiments, no one will ever know, but no change was made to this arrangement throughout the series' life.

Although Scot is credited with the Heraldic reverse, numismatic researchers believe that he was aided in the preparation of the first dies by assistant John Smith Gardner, who started work at the Mint in 1794, but quit less than two years later, supposedly unsatisfied with his compensation. No doubt he was also weary of Scot's constant harassment, which the marginally competent Chief Engraver heaped on anyone he thought might threaten his position. The first eagles with the Heraldic reverse appeared in the summer of 1797, with the obverses showing Liberty's bust flanked by ten stars to the left and six to the right. The following year only thirteen stars appeared, but in two arrangements: nine left, four right; and seven left, six right. Both are overdates and quite rare, with less than 40 pieces known of the two varieties. Beginning in 1799, all obverses had thirteen stars, arranged eight left, five right. The 1799 coins are the most frequently seen of the series, along with those of 1801: these two dates are often available in mint state, and occasionally superb quality pieces appear, generally in the sales of major collections. The 1800 issue is quite elusive, appearing in mint state about as often as the 1797, but far less frequently in circulated grades. With no eagles made dated 1802, the next date in the series is the 1803, an issue considerably rarer than the two most common dates, but paling in comparison to the 1804, a date exceeded in rarity only by the 1798/7 coin. Thirty years later, eagles dated 1804 were made for inclusion in diplomatic presentation sets: Four of these remarkable proofs are known, one in the famous King of Siam set.

As on most early coins, varieties abound in this series, including differences in placement of the reverse stars and multiple combinations of obverse and reverse dies. Rarely assembled by variety, and only slightly more often by date, this series experiences strong demand from type collectors. Although mint state examples exist of all dates, Heraldic reverse eagles are usually found in the higher circulated grades.

Wear first appears on this design on Liberty's hair, cap, drapery and cheek. On the reverse, check the clouds and the eagle's wings and breast feathers. Often these coins were not fully struck, resulting in loss of detail that is often mistaken for wear, particularly on the shield. Adjustment marks, which result- ed from filing excess gold from overweight planchets, are quite common to these early coins. While technically a mint-made defect, marks that greatly impair the aesthetic appeal of a coin may affect its grade, and certainly its price.

The Philadelphia Mint made 119,248 eagles of this design between 1799 and 1804, but many were destroyed in the huge melts that took place throughout the early part of the 19th-century. As the world price of gold rose in response to France's "Reign of Terror" and the Napoleonic Wars, large quantities of U.S. gold coins disappeared across the Atlantic as just so much bullion. With the Mint bound to the fifteen to one silver/gold ratio established by the Coinage Act of 1792, gold's rising price limited both the amount of metal available for coinage, and the coins' ability to circulate.

By 1804, melting of U.S. gold coins was out of control. Most of the Mint's production went directly into the hands of speculators and bullion dealers, bypassing the channels of commerce completely. Accordingly, President Thomas Jefferson halted the production of gold eagles (along with silver dollars) in 1804. The Mint coined no more eagles until 1838, when the new Liberty Head design by Christian Gobrecht appeared.