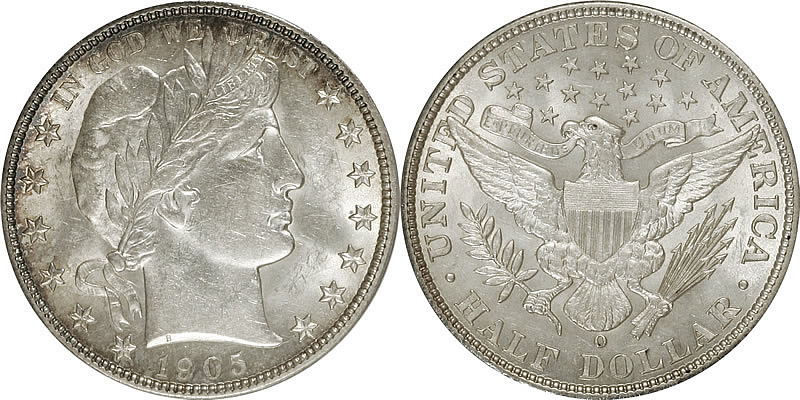 The year was 1892, and new beginnings seemed to be the order of the day. That was the case in U.S. coinage, as well. Three new silver coins entered circulation that year. Sometimes identified as the Liberty Head half dollar, quarter and dime, they're more often referred to by the name of their designer: the U.S. Mint's chief sculptor-engraver, Charles Barber.

The subsidiary silver coins were long overdue for a facelift. All had carried the Seated Liberty portrait for more than half a century, and while it's true that life was more leisurely back then, the pace of change in this case was downright glacial. The Mint had had little incentive to change the designs of these coins. Only one of the three, the Seated Liberty dime, had been made in the previous decade in anything approaching normal numbers. New half dollars and quarters were barely struck at all during the 1880s, because the federal government had more than enough older coins (some dating back to the late 1840s) stashed away in its vaults to satisfy public demand.

The Mint was not oblivious to the need for new designs. In his annual report for 1887, Mint Director James P. Kimball pointedly referred to the "popular desire for an improvement of the coinage in respect to the present designs." Not until 1890 did the inventories of older halves and quarters finally decline to the point where normal production seemed likely to resume, making the time more propitious for giving the silver coins a brand-new look.

In 1890, Kimball secured legal underpinning for the concept of regular design change. He prevailed upon Congress to pass legislation specifying that from that point forward, coin designs could be changed administratively after being in use for 25 years. The half dollar, quarter and dime were eligible at once, although in point of fact, the Mint could have changed them any time it wanted under the standard procedures it had followed in previous years.

Kimball was intrigued by the notion of holding a limited competition to obtain new designs for the silver coinage. At his urging, in 1890 the Treasury invited 10 outstanding artists to submit proposed designs for the half dollar, quarter and dime. Augustus Saint-Gaudens, the nation's pre-eminent sculptor, headed the list of invitees. There's little doubt that the contest would have borne impressive fruit, but before it could begin, the artists got together and drafted a set of terms without which, they insisted, they wouldn't compete. Among other things, they demanded that each entrant get $100 for each sketch that he submitted and $500 for each completed model. The Treasury turned them down and instead conducted a contest open to one and all. This produced some 300 entries, but nothing deemed usable on the coinage.

Chief Engraver Barber proved to be the winner in the end. Frustrated by the poor public entries, the Mint turned to Barber in 1891 to design the coins, an assignment he had coveted all along.

Barber came up with similar obverse artwork for all three coins. It features a right-facing head of Liberty with her hair bound up in a cap, a laurel wreath resting along her hairline and a diadem bearing the incused inscription LIBERTY over her brow. The designer's initial (B) is at the base of the neck. On the half dollar and quarter, the motto IN GOD WE TRUST appears above this portrait, the date below and 13 stars alongside. The two larger coins also share a common reverse design. It depicts a heraldic eagle with a shield on its breast, an olive branch clutched in its right talons and arrows in its left talons. Inscriptions on this side include UNITED STATES OF AMERICA along the top border, the statement of value along the bottom and E PLURIBUS UNUM on a ribbon held tightly in the eagle's beak. Thirteen stars are arrayed in the field above the eagle. When grading this design, the points on the obverse that will first show wear are the cheek and the hair below LIBERTY; on the reverse, check the eagle's head and the tips of the tail and wings.

All three Barber silver coins made their first appearances in 1892, and all three had steady, unspectacular careers in the nation's coinage lineup. In the case of the Barber half dollar, annual production never exceeded 6 million at any given mint; the highpoint came in 1899, when the main mint in Philadelphia made just a shade over 5.5 million. On the other hand, yearly output never dropped below 100,000 at any one mint. The low point occurred in 1914, when just 124,610 half dollars were struck in Philadelphia. Besides the main mint, Barber halves also were produced at the branch mints in New Orleans (O), San Francisco (S) and Denver (D), with the mintmark placed below the eagle. Scarce issues include 1892-O, 1892-S, 1893-S, 1896-S, 1901-S, 1904-S and the last three pieces from Philadelphia1913, 1914 and 1915. However, there are no extreme rarities. Proofs were produced every year, with mintages ranging from a high of 1,245 in the first year of issue to a low of 380 in 1914, the second-to-last year of the series. In 1916, the Barber coin was replaced by a new half dollar, the Walking Liberty type.

Barber half dollars were struck for a total of 24 years and in 73 different date-and-mint combinations. Collectors do assemble date-and-mint sets, especially in circulated grades, but in mint condition this coin is far more often collected by type. Meaningful numbers exist in mint state levels up to MS-65, but above that the population is thin.

The total output of Barber half dollars for all 24 years was only about 136 million. That's less than half the number of Kennedy halves struck in 1964 at the Philadelphia Mint, but then, Barber halves were bigger money. Back in 1900, a half dollar would have bought a man's shirt or two pairs of suspenders. Money certainly went further in the "good old days!"

Barber Half Dollars for Sale

Barber Half Dollars on eBay