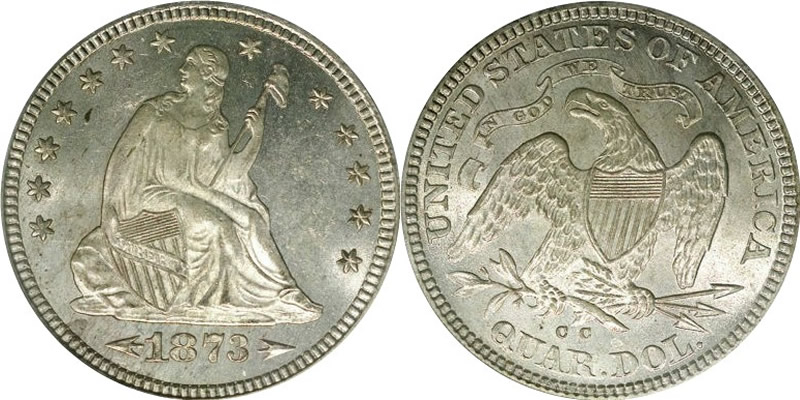 The Mint Act of 1873, later called by critics the "Crime of `73," started life as a proposal by Treasury Secretary George S. Boutwell to move control of the Mints to Washington and overhaul the existing coinage statutes. Before it became law, however, it would encompass the opinions of over thirty Treasury and Mint officials, undergo numerous revisions and fuel intense debate in Congress for almost three years.

In the early 1870s, silver was once again in oversupply. Germany and France had adopted the gold standard, dumping millions of dollars worth of the metal on the market. At the same time, new discoveries of silver in the western United States exacerbated the problem. Aside from mine owners, silver had few friends. Foreigners didn't want their U.S. bonds redeemed in the depreciating metal, and many believed that the overabundance of silver would fuel inflation.

Boutwell's recommendations were included in a coinage bill introduced in 1870 by Ohio Senator John Sherman, an advocate of the gold-standard. Sherman had attended the Paris International Monetary Conference in 1867, and he returned to the United States with the notion that this country needed to adopt a gold standard based on the metric system used by the Europeans. Such a standard would sharply curtail use of silver, the metal that had been the mainstay of commerce in this country. Curiously, although the provisions of Sherman's bill were considered at length, few contemplated what effect they would have on the economy of the United States. Sherman promoted his bill through two sessions of the Senate until it was finally approved on January 10, 1871. It was sent to the House of Representatives the same day but remained under consideration in that chamber for over a year, advocated strongly by Massachusetts Representative Samuel Hooper and Chairman of the House Committee on Coinage, Weights and Measures, Representative Kelley. After the usual legislative paper shuffling, a beleaguered Congress finally passed the bill on February 12, 1873, with an effective date of April 1. The legislation demonetized silver, eliminating the standard silver dollar, half dime and three-cent coin (as well as the two-cent piece), but it created a Trade dollar for use in the Orient. It also provided for a slight increase in the weight standard of the quarter, dime and half dollar to conform with the "metric" system. The Act produced no benefit for the commerce of the United States yet greatly affected the use of money. It ended "free coinage", the right of anyone to have foreign silver or bullion coined into U.S. silver coins without charge. U.S. Bonds had to be redeemed only in gold, as silver was no longer a monetary metal. The net effect made the U.S. national debt doubly difficult to pay off. However, it was of great benefit to the Europeans, especially the English, who were large importers of American cotton and wheat.

Several years later, Missouri Senator Richard "Silver Dick" Bland would declare that this "Crime of `73" "...was a fraud...stealthily passed, without reconsideration and without debate." Others claimed that it was ushered through Congress by legislators in cahoots with agents of foreign governments. Although Bland's accusations ignored the fact that the bill was discussed and amended for several years, the other charges gained some credence in 1895 when a pamphlet published by the American Bimetallic Union recounted the recollections of a prominent Colorado citizen, Frederick A. Luckenbach. Luckenbach contended that a Mr. Ernst Seyd of London came to America in the winter of 1872-3 with £100,000, representing the interests of the Bank of England, which was determined to get a bill demonetizing silver passed in the United States Congress. It turned out that Mr. Seyd enjoyed a close personal relationship with Representative Hooper, leading many to suspect that something unorthodox had indeed occurred.

Although the reason is unclear, officials decided that the new silver coins would bear a mark indicating the change of weight. Since arrows at the date were used in 1853-55 for this purpose, they were adopted again for the coinage of 1873. The weight change was insignificant, as the new standard didn't exceed the allowable deviation in weight proscribed by law. It made no difference if old or new planchets were used, and it's likely that they were used interchangeably. Though the previous coin issues remained current, many business strikes and proofs were melted, including the obsolete three-cent coins and half dimes. This action created rarities of many silver issues of the early 1870s.

The arrows added to the existing Seated Liberty quarter were just one of several cosmetic and technical changes this design had undergone since it had been introduced by Christian Gobrecht in 1838. The obverse depicts Miss Liberty seated on a rock, holding the Union Shield and a pole topped with a Liberty cap. On the "Arrows" coinage of 1873-74, the date below Miss Liberty is centered between opposed arrowheads. On the reverse, an eagle with outstretched wings is perched on an olive branch, clutching arrows and branches. Above the eagle is the legend IN GOD WE TRUST, and surrounding the design is UNITED STATES OF AMERICA and the denomination expressed as QUAR. DOL. Mintmarks are found on the reverse, under the eagle. As with all Seated Quarters, look for traces of wear on Liberty's hair, breast, knee and arms. On the reverse, check the eagle's wing tips, neck and claws.

Arrows quarters of 1873-74 are easily obtainable in circulated grades but become very elusive in AU or better. The key to the series is the 1873-CC issue, which is extremely rare in mint state. Next in scarcity is 1873-S. While the Philadelphia coins of both years have the largest mintages, the date most often available in mint condition is 1874-S. A hoard of 80 to 100 uncirculated pieces of this date turned up on the West Coast around 1949 and was slowly dispersed over the next twenty-five years.