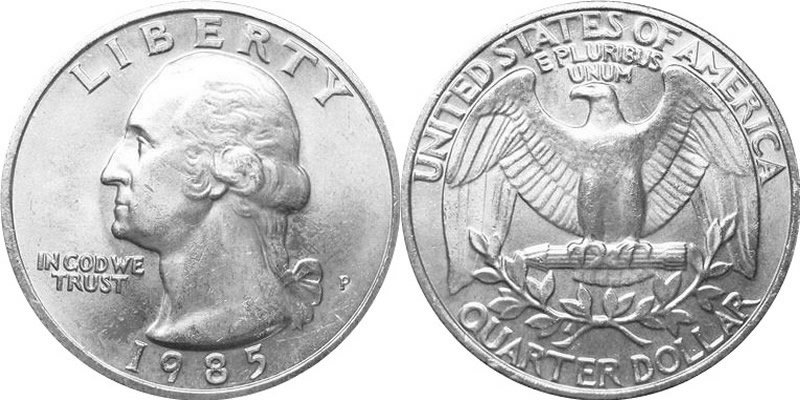 The dark shadow of Depression fell across the U.S. in 1931, giving Americans little to celebrate. Soup kitchens, massive unemployment and the Dust Bowl all took their toll on the public's spirit. But the following year was the 200th anniversary of George Washington's birth, and officials in our nation's capital were ready to mark the occasion. The Treasury Department had proposed that a half dollar be struck to honor the birth of the nation's founding father. Enlisting the cooperation of the Commission of Fine Arts and the Washington Bicentennial Commission, they went ahead with plans for a design competition.

Rules announced early in the year called for entries modeled after the "celebrated bust" of Washington by noted French sculptor Jean Antoine Houdon. The bust, created from a life-mask taken at Mount Vernon in 1785, was uncannily accurate and nationally admired. Ninety-eight entrants fashioned some 100 designs: Most were amateurish, some were good, but one was exceptional, at least in the Commission's opinion. It was submitted by Laura Gardin Fraser, designer of the Oregon Trail commemorative and wife of James Earle Fraser, who created the Buffalo nickel. Mrs. Fraser's powerful, medallic design was far superior to the competition and reminiscent of the artistic works produced during the numismatically "golden years" inspired by Theodore Roosevelt. The Commission's decision was unanimous. Unfortunately, there were other people to please.

Initially, Congress got into the act. Since changing the design of the half dollar required their approval, once asked, they instead decided to change the quarter, thereby signaling an end to the acclaimed Standing Liberty design issued since 1916. No one argued with the denomination change, but a real problem was to arise with the man lawfully responsible for coinage designs, Treasury Secretary Andrew Mellon.

Mellon had his own views about art. Rich beyond imagination, he had amassed one of the world's foremost art collections, along with a reputation for stubbornness which was only exacerbated by his wealth and position. Some would later attribute it to Mellon's chauvinism, but he repeatedly refused to listen to the Commission's pleas for Fraser's design. Instead he chose one by John Flanagan, a medalist whose earlier works evoked his studies under Augustus Saint-Gaudens, but whose Washington design was an icon of the bland, conservative and frozen images that proliferated (especially in government sculpture) during the Depression. At first, Mellon placated the Commission, calling for a second contest. But ultimately, he chose the Flanagan design. While still fielding protests from the advisory panel, he left office to become Herbert Hoover's ambassador to Great Britain. His successor, Ogden Mills, would consider the matter no further. He brusquely reminded the Commissioners that they had a purely advisory role, and the final decision fell upon the Treasury Secretary, not the Commission.

Flanagan's design was simple but more appropriate to a portrait than medallic art, with exceptionally low relief. Washington faces left and dominates the obverse, with the date below and LIBERTY above. The motto IN GOD WE TRUST is in the left field, with the designer's initials on the base of the neck. A spread-winged heraldic eagle adorns the reverse, encircled by UNITED STATES OF AMERICA and E PLURIBUS UNUM above, and Quarter Dollar and a wreath below. Mintmarks are found below the wreath on coins dated 1964 and earlier, and just to the right of Washington's ribbon on issues beginning in 1968.

From a production viewpoint, Mint officials must have loved the design. With such low relief, coins could be rapidly struck with only one blow from the press. The drawback, however, was not only an artistic loss, but the weak design elements required periodic alterations to the master hub. The motto was so weakly defined in 1932 and on some issues of 1934 that it could barely be read, even on uncirculated coins.

There have only been two significant changes in the series since its inception in 1932. In 1965, the composition was changed from 90% silver to a clad or "sandwich metal" of 75% copper and 25% nickel, bonded to a pure copper core. The second modification came in 1975, when Jack Ahr's Bicentennial "Drummer Boy" design appeared on the reverse, with the dual-date 1776-1976 on the obverse. In 1977, the regular design returned.

Continually gaining in popularity with collectors, Washington quarters are usually assembled by date and mint. Coins were issued every year except 1933, and the only break in the series recognized by collectors is 1964, the final year of silver coin production. Although not rare, the low-mintage 1932-D and S quarters are considered scarce issues, along with mint-state 1936 Denver coins which, despite their large mintage, somehow escaped the hoarder's nets. Fortunately for today's collectors, the renowned dealer Wayte Raymond and others were quite diligent in their accumulation of bank-wrapped rolls in the `30s, a time when most people couldn't even afford the $10 cost of a single roll. Many Americans didn't have a job, and most who did, like the decimated ranks of Detroit auto-workers, only made about $20 a week.

Since 1932, over 21 billion business strikes and 60 million proofs have been issued, an awesome quantity by any standards. Production took place in four mints: Philadelphia, Denver, San Francisco and West Point. Although collectors are focusing more attention lately on the business strikes, proofs have always been favorites, particularly the 1936-1942 issues and the scarce cameo-proof coins of 1950 to 1964. In recent years, the numismatic community has learned of a unique oddity in the series, a 1970-S proof Washington struck over a 1900 Barber quarter. Apparently the concoction of a creative mint employee, the piece somehow escaped into a 1970-S proof set, no doubt initially baffling its discoverer.

Washington quarters are collected in all grade ranges and are especially popular in XF, AU and mint state. With so many coins struck from so many dies, die-varieties, over-mintmarks and hubbing errors abound, making the series a fertile field of study for those delving into the intricacies of modern coinage production. Wear on the design will first show on Washington's hair at the ear and on the center of the eagle's breast. Struck counterfeits exist, but collectors are more likely to encounter altered mintmarks, especially on 1932-D and 1932-S issues. Authentication of any questionable specimens is highly recommended.