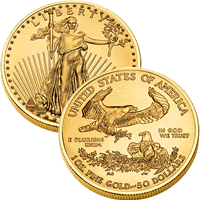 Authorized by the Bullion Coin Act of 1985, American Eagle Gold Bullion Coins quickly became one of the world's leading gold bullion investment coins. Produced from gold mined in the United States, American Eagles are imprinted with their gold content and legal tender "face" value. An American Eagle's value is based on the market price of its metal content, plus a small premium to cover coinage and distribution. American Eagles use the durable 22 karat standard established for gold circulating coinage over 350 years ago. They contain their stated amount of pure gold, plus small amounts of alloy. This creates harder coins that resist scratching and marring, which can diminish resale value. Minted to exacting standards, the obverse (front) design is inspired by what's often considered one of America's most beautiful coins: Augustus Saint-Gaudens' celebrated $20 gold piece, minted from 1907-1933. The reverse features a nest of American Eagles, symbolizing family tradition and unity. What truly sets American Eagles apart is that they are the only bullion coins whose weight, content and purity are guaranteed by the United States Government. Investors can buy them with confidence, knowing the coins contain their stated amount of gold. In addition, long-term savers can include American Eagles in their Individual Retirement Accounts (IRAs).