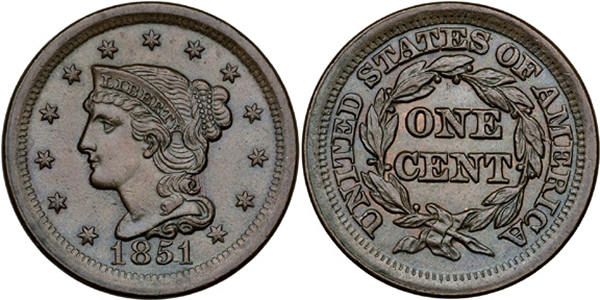 By 1839, few people inside or outside the U.S. Mint were satisfied with the large cent design, least of all its creator, Chief Engraver Christian Gobrecht. But this was nothing new; from its very beginnings, the large cent had suffered abuse and ridicule. First of all, there were the designs. Though loved by present-day collectors, initial reaction wasn't quite so kind. Contemporary and modern names describing Miss Liberty vividly illustrate the public's disdain. From the "Liberty in a fright" of the Chain cents through the Classic Head's "fat mistress" to the "obese ward boss" of the Matron Head, criticism never ceased. Now Gobrecht was faced with the same for his "Silly" and "Booby" head cents of 1839. It was clearly time for a change.

Art historians and numismatists believe that Gobrecht's inspiration for the new 1839 design was the classic figure of Love in Benjamin West's painting, Omnia Vincit Amor (Love Conquers All), created early in the 19th century. The braided hair over Liberty's brow, her coronet and the long, loose locks flowing down her neck reflect the famed Empire style, then a decade out of date in Europe but firmly fixed in American hair and clothing fashions of the day.

Issues of 1839 through early 1843, now generally called the Petite Head, show Liberty leaning forward, and feature a younger-looking version than Gobrecht's later rendition, on which the head is upright and poised more gracefully in the field. Liberty is surrounded by the obligatory 13 stars, with the date below. The reverse continued to use a closed-circle laurel wreath, made up of a single stem with leaves in groups of four, interspersed with large round berries. The wreath encircled ONE CENT (without the raised line below that appeared on earlier designs) and in turn was surrounded by the legend UNITED STATES OF AMERICA. Gobrecht's 1843 revision featured bold serif-style letters substantially larger than on earlier reverses. Grading of this design is fairly straightforward, with measurable wear first appearing on the hair above the ear and on the bow on the wreath.

Braided Hair coins achieved greater uniformity than any of the earlier large cents. Introduction of steam power, advances in hubbing the design into the dies and the use of logotypes or single four-digit punches to impress dates eliminated the many varieties so beloved by copper collectors. Minor varieties do exist, however, and these were first listed by Frank C. Andrews in 1883.

The definitive work on these late dates was completed by Howard R. Newcomb in 1938 and published by Stack's of New York in 1944 as United States Copper Cents 1816-1857. Newcomb devoted years to identifying and describing thousands of minor varieties. "N" numbers remain standard today, though attribution became easier with the J.R. Grellman-Jules Reiver Attribution Guide for United States Large Cents, 1840-1857, published in 1986.

Naked-eye or "Red Book varieties" of general interest include large and small dates of 1840 and 1842, and multiple obverse/reverse combinations for 1843. Others are 1844 and 1851 coins showing an 18 punched upside down where the last two digits of the date were supposed to go, creating the 1844/81 and 1851/81 varieties. Large cents of 1846 appear with small, medium and large dates, while 1847 coins include the bold Large over Small 7 variety. The 1855 issues show slanting (italic) or upright 5s. These two types of 5s also occur on cents of 1856. Chief Engraver James B. Longacre favored the slanting 5, while the upright 5 is attributed to an unknown assistant. The bold 1855 "Knob on Ear" variety resulted from a large die chip that gradually expanded to cover part of Liberty's head. The remarkable increase in production with the arrival of steam power is well illustrated by mintages of this design. Except for 1857, between 1.5 and 9 million pieces were made each year, all at the Philadelphia Mint. Proofs are known of all dates except 1839, 1851 and 1853, and all are rare to extremely rare. As always, mint-red coins enjoy consistent demand, particularly from type collectors. Most of the dates in the 50s, except for 1854 and 1857, are occasionally available in mint red: Hoards of each were uncovered over the years, many in bank vaults during 1933's Bank Holiday.

Although initially welcomed by a public in need of small change for commerce, the cumbersome coins soon were widely disliked, even before the Braided Hair design debuted. They were heavy, often found badly worn or corroded and didn't have legal-tender status. Merchants could and did refuse to accept them, often preferring their own store tokens or the "Hard Times" tokens commonly used in trade.

Rejected in commerce, the unwanted cents didn't go to waste. Craftsmen needing copper for their work often found it advantageous to purchase cents in bulk, sometimes by the keg (approximately 14,000 pieces!), and melt them down. With the rising price of copper in the early 1850s, they paid less for the coins than the Mint paid for the raw copper. Other innovative uses abounded. Physicians recommended wearing them for arthritis (not unlike the copper bracelets of today), housewives used them in pickling brine and after drilling, forming or shaving they served as everything from gears to screwdrivers to valve-cocks to advertising tokens. They even entered the slave trade. Ironically, while some large cents were shipped overseas to pay tribal chieftains for slaves, uniquely notched pieces would later serve as identification for runaway slaves on their way north. As early as 1850, the Mint gave serious thought to replacing the large cents with a smaller coin. In 1857, officials selected an alloy of 12% nickel and 88% copper for the new 19-millimeter Flying Eagle cents. Few mourned the end of the large cents at the time, but the sudden change galvanized America's first numismatists and focused their attention on the familiar copper coins. After 1857, Philadelphia became the birthplace of coin collecting in America. English-born Edward Cogan added large cents to his line of books and art work, and others soon followed his lead. Within a decade, dealer Ebenezer Mason would begin publishing his Monthly Coin and Stamp Collectors Magazine, and the American Journal of Numismatics would debut, both further publicizing the virgin field of numismatics.

A decade after its demise, the Braided Hair large cent made one last shadowy reappearance. Mint Director Henry Linderman ordered "fantasy pieces" made dated 1868 using the old dies in storage. Struck both in copper and nickel, fewer than a dozen pieces are known today. Between collectors and the creativity of the Philadelphia Mint, the large cent was more popular after its death than during its many years of circulation!