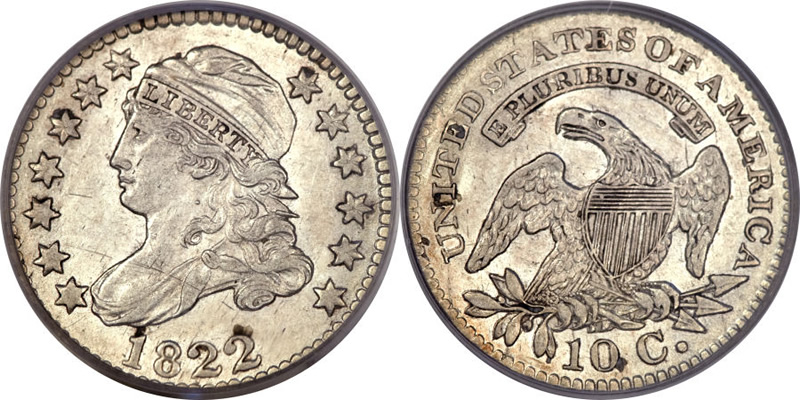 The first few years of the 19th century saw tremendous expansion for the fledgling United States. The Louisiana Purchase added 828,000 square miles to the U.S., doubling the size of the nation. Shortly after that, the exploratory expedition of Meriwether Lewis and William Clark proved the feasibility of an overland route to the Far West, encouraging western settlement and commerce. The country was expanding in population, also. The new democracy attracted thousands of immigrants from all over war-torn Europe.

It was March of 1807 before the fourth Mint Director, Robert Patterson, finally hired the German-born John Reich as Assistant Engraver. Born in Fuerth, Bavaria in 1768, this talented die cutter arrived in America as an indentured immigrant and settled in Philadelphia about 1800. Reich sought employment at the Mint in 1801, and although he was unable to secure a permanent position, an unidentified officer of the institution recognized his talents and generously purchased his freedom. Although the infant Mint had suffered since 1792 from a shortage of qualified engravers and mechanics (and Reich was certainly qualified), Patterson's predecessor, Elias Boudinot, preferred delaying an offer of a permanent position to Reich until, as he wrote in a letter to President Thomas Jefferson, ". . . I have good evidence of his character." A more likely reason was Boudinot's reluctance to offend the aging and professionally mediocre Chief Engraver Robert Scot.

At that time the dime was still unfamiliar to most Americans. The Act of April, 1792, creating the decimal dollar, made a key component "dismes or tenths . . . a disme being a tenth part of a dollar." However, the quarter fit more easily into popular usage, as it was equal to the Spanish two reales or "two bits." Its half was the Spanish silver reale, equal to 12-1/2 cents. The high-silver content two-reales coins were legal tender. Also in wide circulation but not legal tender was a Spanish coin of inferior silver alloy struck in the 1700's and called two reales but known throughout the former 13 colonies as the pistareen. A dime was really half a pistareen, but the new 10-cent pieces were vastly outnumbered by the widely preferred silver one-reale coins, however worn they might be.

Reich began work as assistant to Scot, receiving a salary of $600 per year. From 1807 to 1817, he performed most of the Chief Engraver's work without receiving the salary or prestige of the higher post. Coming aboard on April 1, he was cutting dies for his first Capped Bust coins, the 1807 half dollars, by April 2. Only after getting the half dollar, half eagle, cent and quarter eagle out of the way did Reich tackle the dime.

This era was one of Rubenesque beauty, as a glance at Scot's dowdy Draped Bust obverse will show. As she first appeared on the 1809 Capped Bust dime, Reich's Liberty was, if anything, a trifle more streamlined than her predecessor. Fifty years later, U.S.Mint writer William Ewing DuBois would claim that the model for all these rather stout, ample-bosomed Liberties was a woman he called "Reich's fat German mistress."

The reverse bore an American eagle with head turned left, holding three arrows symbolizing strength, and an olive branch representing peace. On its breast is the U.S. Shield composed of six horizontal lines indicating blue, with 13 stripes below, six of these made of three vertical lines indicating red. Such lines were an 18th century engraver's standardized method of showing colors in black-and-white engravings; blue representing dominion, red signifying force, with white denoting purity. Encircling the top of the eagle is the inscription UNITED STATES OF AMERICA, and a scroll with the incuse motto E PLURIBUS UNUM. Beneath the eagle is the denomination 10 C. When grading this series, take into account that weak strikes are common. On the obverse, wear will first show on the drapery at the front of the bust, the hair at the forehead and above the ear and the shoulder clasp. On the reverse, check the eagle's claws, neck, and wings.

Reich prepared a single steel punch of his Liberty bust, impressing it into each working die by blows of a small hammer. He then impressed each star by eye, seven on Liberty's left, six on her right, placing the date in the space below the bust. Although known as "Large Size," these dimes should more properly be called the "Open Collar" type. They were struck without a restraining collar, giving them a broad, low-rimmed look. Averaging 1.1 millimeters smaller in diameter than the preceding Draped Bust dime, this type is only large in relation to its smaller successor issued from 1828 onward. In reality, diameters vary widely over the years.

Capped Bust dime production was not continuous, with only three dates struck while Reich was in Mint employ. Dimes were issued dated 1809, 1811, 1814, 1820 through 1825, and 1827. Large quantities were struck in 1820, 1821, and 1827. In all, over five million pieces were minted. All dates are available, with the low mintage 1809, 1811 and 1822 being the scarcest, although all are known in gem uncirculated. An unknown number of proofs, actually presentation pieces, exist for the years 1820 and later. Type collectors will have no problem finding premium examples; it's mainly the variety collector who faces challenges with this series. Although variety collecting today has fewer adherents than in the past, Bust dime devotees are still quite numerous.

Die variety identification of early dimes started late. Most die varieties are identified by the position of the date, the spacing and alignment of stars, the size of 10 C. and the exact position of letters above the ends of the motto scroll. Most other denominations were carefully charted by die variety decades before any serious work was done with dimes. Popular coin books gave only major varieties such as large and small dates. Abe Kosoff published a rather sketchy pamphlet based on the dimes in the great F.C.C. Boyd Collection that he auctioned in 1945. The denomination finally received its in-depth study in 1984: Early United States Dimes 1796-1837, compiled by five students of the series and published by the John Reich Collectors Society.

Weary of working for his meager salary, Reich resigned on March 31, 1817, exactly 10 years after beginning employment at the Mint. In 1828, Chief Engraver William Kneass introduced the close collar coining method as part of the Mint's quest for technological improvement and uniformity. The Capped Bust design was adapted to this new process, and the Small Size Capped Bust dime was born. It would be issued until 1837, when Christian Gobrecht's Seated Liberty dime was unveiled.