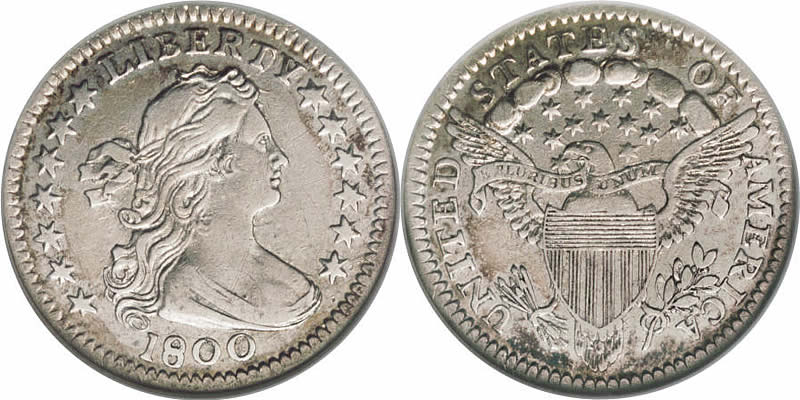 Thomas Jefferson, author of the Declaration of Independence, was also the author of the philosophical direction of the United States. He grew up on the edge of civilization in the "hard scrabble" life of American Colonial days, a self-taught, natural student who learned the basics of living from the books he loved. His heroes were not politicians or soldiers, but philosopher-scientists such as Isaac Newton, Thomas Bacon and Adam Smith. Jefferson was living in Paris in the 1780s, absorbing the new spirit of Enlightenment. He embraced a philosophy that taught the unbiased pursuit of knowledge and skepticism of "truths" long taken for granted. The aim was to no longer just reflect on the state of the world or contemplate another, but to change it.

As Secretary of State under George Washington, Jefferson's public policies reflected his belief in rational change. When it was time for the fledgling United States to create a system of coinage, he knew a decimal system was a scientific and practical necessity, as he followed the work of Simon Stevin van Brugghe, who in the late 16th century, invented the decimal system as an alternative to fractions. Stevin's pamphlet, De Thiende {1585}, later translated by Robert Norton as Disme: the art of tenths, or, Decimall arithmeticke, was familiar to many of Jefferson's colleagues, including Benjamin Franklin, Alexander Hamilton and the new Mint Director, David Rittenhouse.

European and Colonial experiences with coinage were based on jerry-built systems established over many years. They were also non-decimal. The British system, for example, traced its origins to Ancient Rome, with a few impositions by the Saxons and Normans. The unit, the pound, was divided into 20 shillings or 240 pence, with many subsidiary silver and copper units. Spain's reales, a system of eights, or the French system of livre tournois divided into sols and deniers, were simple compared to the even greater complexity of the German or Dutch systems. Establishment of decimal coinage in the United States was not only a clean break with the past, but truly revolutionary and consistent with the new philosophies of "The Age of Enlightenment."

It was fitting that the first silver coins struck at the Federal Mint in 1792 were half dismes, or twentieth-of-a-dollar coins (the spelling "dime" didn't come into general use until 1837). This one act not only established the decimal coinage system in the United States but had enormous political significance, as the coinage of silver was universally recognized as an expression of national sovereignty. Only 1,500 half dismes were made, and Jefferson gave many away as gifts, but the new coins were legal-tender. President George Washington, in his annual address in November of 1792, referred to the half dismes as "a small beginning" in coinage.

In November of 1793, the Mint hired banknote plate engraver Robert Scot as the new Chief Engraver. This decision was regretted in future years, as Scot proved to be egocentric, jealous and as a tenured Mint employee, cantankerous. He had no experience designing device punches for coins and learned as he went. His first attempt, the 1794 Flowing Hair design, suffered from broken punches and was greeted with harsh public criticism. Commentary of the time described Liberty as wearing a "fright" wig, and the bird on the reverse as resembling a turkey more than an eagle.

In 1796, new Mint Director Henry William DeSaussure decided that the coinage designs needed improvement and persuaded the illustrious painter Gilbert Stuart to prepare a new portrait of Liberty. As Scot was too unskilled to translate the buxom portrait to steel, the Mint hired John Eckstein to create the models. Unfortunately, the completed dies degraded Stuart's portrait, and the finished coins exhibited weakness in the center of the design. This was most apparent on the half dimes. Due to various problems at the mint, including yellow fever epidemics, the design was minted for only two years. No more half dimes were struck until 1800.

Scot's design for the Draped Bust/Heraldic Eagle half dime of 1800 was first used on the gold quarter eagles in 1796, the gold half eagle in 1797 and the dollars and dimes in 1798. It features a strengthened and more aesthetic rendering of Stuart's draped bust portrait of Liberty, her hair tied with a ribbon. The inscription LIBERTY appears above her head, and surrounding the bust are seven stars to the right and six to the left. The reverse depicts a large eagle with outstretched wingsthe Union Shield on his breastclutching thirteen arrows and an olive branch. His beak holds a ribbon inscribed with the Latin motto E PLURIBUS UNUM (One made up of many). Thirteen stars are above the eagle, with an arc of clouds above the stars. UNITED STATES OF AMERICA surrounds the periphery.

A total of 124,270 Draped Bust/Heraldic Eagle half dimes were minted from 1800 through 1805, with no coins dated 1804 and no proofs reported. Collectors normally include this coin in a 19th century type set, along with the Capped Bust half dime of 1829-37 and the several varieties of Seated Liberty half dimes (1837-73). High grade pieces are elusive or nonexistent. When uncirculated pieces do appear in the market, they're most likely dated 1800. The rarest date of the series is 1802, with a mintage of only 3,060. Noted researcher, the late Walter Breen, estimated that only 35 to 45 examples of 1802 survive in all grades, but none in mint state. As counterfeits exist of this famous rarity, authentication is highly recommended. An interesting variety of this short-lived series is the 1800 LIBEKTY issue, made when a defective "R" letter punch was used.

When grading this design, take into account that, due to poor striking quality, these coins usually exhibit weakness on one or more high points. It is important to discern the difference between strike and wear. Weak areas often include Liberty's hair and drapery, the obverse stars and the stars and clouds above the eagle. The first places to show wear are the hair above the forehead and by the ear, on the drapery just over the date and the drapery lines at the bust. On the reverse, look for wear on the eagle's wing tips and tail feathers.

Though the half dime denomination was important in commerce as a convenient way to make change, the Mint's ability to make enough of these coins was limited. Production ceased of the Draped Bust/Heraldic half dimes in 1805. The markets, and especially the banks, preferred the large quantities of legal tender Mexican silver half reales (valued at about six cents) then in widespread use. The half dime was not minted again until 1829, when the denomination returned with the William Kneass / John Reich Capped Bust design.

Draped Bust Half Dimes for Sale