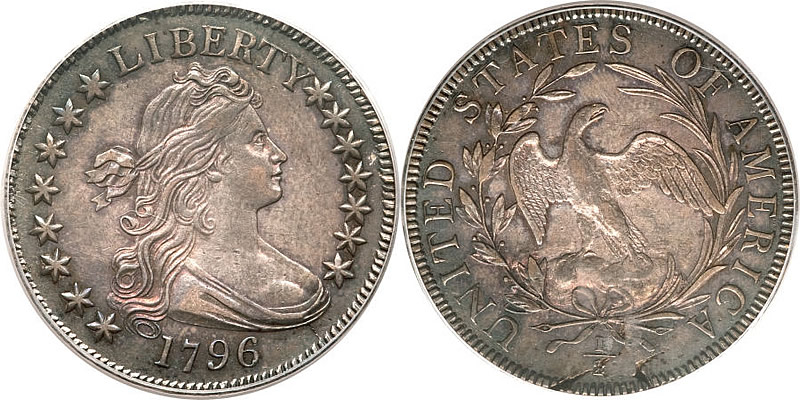 United States coin designs underwent rapid and sometimes radical change during the first few years of federal coinage. The fledgling U.S. Mint was keenly sensitive to criticism and seemed to be experimenting constantly in an effort to find just the right monetary image for the brand-new nation.

The early silver coinage reflected this restlessness. Before the Mint was even 10 years old, it had produced silver coins with three different types of designs. They weren't entirely dissimilar, in fact, there was a great deal of overlap in their features as one type gave way to the next. Still, they have long been recognized by collectors as three distinct series, although admittedly short ones.

Not all the silver coins went through the entire progression; the dime and quarter were struck in only two types during that very first decade. The half dollar, however, was one silver coin that did touch all three bases.

The first half dollar was of the so-called Flowing Hair design. Its obverse featured a portrait of a youthful female figure whose hair flowed freely behind her; its reverse bore a small, spread-winged eagle surrounded by laurel branches.

After just two years of production, 1794 and 1795, the Mint replaced the youthful Miss Liberty with a more mature and more sedate portrait, one that has come to be known as the Draped Bust type. To a great extent, this resulted from a change in leadership at the Mint.The first director, David Rittenhouse, resigned at the end of June, 1795, and his successor, Henry William DeSaussure, set out at once to improve the designs of all denominations, especially the silver pieces.

DeSaussure's jaundiced view of existing coin designs may have been formed, in part, by comments he heard from some of their vocal critics. Consider, for example, the following putdown of the Flowing Hair and small eagle portraits, which appeared in a letter from one Carlile Pollock to a certain General Williams of Salem, New York: "Nothing can be more wretched: an unmeaning fool's head on one side, and something that resembles a turkey cock on the other. Oh, shame, shame, shame! The Eagle of America mantling the arms of the United States, as we see it on the City Hall, would have been a dignified impression, and on the other side, if the President's head should be too aristocratic, a plough and a sheaf of wheat would be better than an Idiot's head with flowing hair, which was meant to denote Liberty, but which the world will suppose was intended to designate the head of an Indian squaw."

Pollock's letter was dated January 25, 1796, well after the Flowing Hair portrait was replaced, so it couldn't have figured in DeSaussure's decision. In fact, DeSaussure himself was gone by then. He resigned on October 27, 1795, after less than five months on the job, due to illness and disaffection with the position. By that time, however, the new design was already in place on the silver dollar, and arrangements had been made to use it on the other silver coinage. It made its debut on the half dollar in 1796.

While some might disagree with the critics of the Flowing Hair design (many collectors today, in fact, consider it quite appealing), there can be no quarrel with the choice of an artist to fashion its replacement. At the urging, perhaps, of President George Washington himself, the Mint Director turned to famed portrait artist Gilbert Stuart. The latter reportedly used as his model a Philadelphia socialite widely considered to be the most beautiful woman of her day: Mrs. William Bingham (nee Ann Willing). Stuart's drawing was transferred to plaster by a Providence, Rhode Island, artist named John Eckstein, and Mint Chief Engraver Robert Scot then executed the coinage dies. Contemplating the Flowing Hair motif in 1795, Stuart is said to have remarked that Liberty had "run mad," adding: "We will bind it up and thus render her a steady matron."

Like her more youthful predecessor, this matronly Liberty had stars alongside her. Curiously, though, the number of stars increased from 15 to 16 partway through the 1796 production year, after Tennessee was admitted to the Union as the 16th state, then dropped back to 15 in 1797. The reverse was similar to that of the Flowing Hair design, but slightly modified. The eagle became more graceful, less ungainly, and its perch was moved from a rock to a cloud. Additionally, the branches were reworked and refined, with a palm branch now on the right and an olive branch on the left. As on the previous coinage, the inscription LIBERTY and the date appear on the obverse and UNITED STATES OF AMERICA on the reverse. Lettering on the edge proclaims the statement of value: FIFTY CENTS OR HALF A Dollar. For emphasis, the fraction 1/2 was added below the wreath.

Draped Bust half dollars with the small-eagle reverse were struck in only two years, 1796 and 1797, and in minuscule quantities, at that. The combined total for both years is just 3,918 (the Mint didn't break down the figures), as the Mint was concentrating on silver dollars and smaller silver coins at the time. No half dollars at all were made from 1798 through 1800, and when production resumed in 1801, the Draped Bust was mated with a new reverse featuring a heraldic eagle.

No proofs are known for this series, but prooflike specimen pieces exist. Even though the series lasted just two years, it is almost always collected by type rather than date, because so few were made. This half dollar is, in fact, one of the pivotal keys and crowning glories of any type set. Draped Bust/Small eagle half dollars are extremely scarce in all grades and virtually nonexistent in high mint state grades. Points to check for wear are the hair above Liberty's forehead and the crest of the eagle's breast.

Draped Bust Half Dollars for Sale