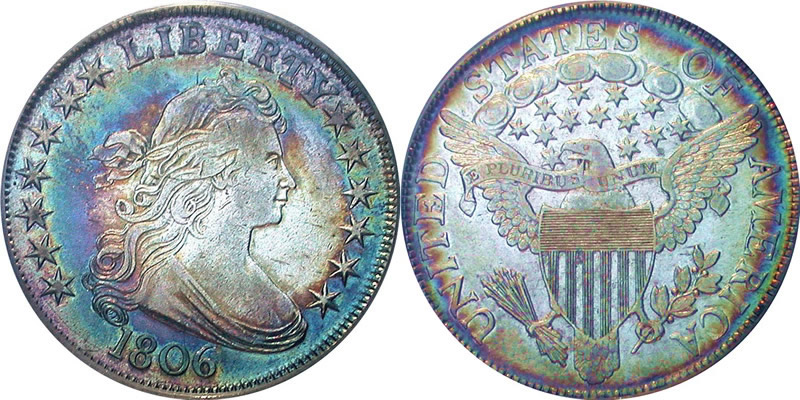 The start of the 19th century also marked a new beginning for U.S. half dollars. After a three-year hiatus, the large silver coins returned in 1801 with a new design: the Draped Bust/Heraldic Eagle type.

The United States Mint wasn't yet 10 years old at the time, but this was already the third different design to appear on the 50-cent piece, the two earlier series having lasted just two years apiece. Clearly, federal officials were casting about for just the right combination of symbolism and artistry to showcase on the young nation's coinage.

The first half dollar, in 1794, had been of the so-called Flowing Hair design. Its obverse bore the portrait of a youthful female figure whose hair flowed freely behind her; its reverse depicted a small, spread-winged eagle surrounded by laurel branches. After just two years of production, the Mint replaced the youthful likeness of Liberty with a more mature, almost matronly portrait, one commonly known as the Draped Bust type. Initially, however, it retained the small eagle, with subtle modifications, on the reverse. This design appeared on half dollars for only two dates: 1796 and 1797.

When the series resumed after the turn of the century, the naturalistic bird had given way to a larger, more formal eagle with a shield superimposed upon its breast: the now-familiar heraldic eagle design. This new series, too, was destined to be short-lived, lasting just six years. But during that time, total output greatly exceeded the levels of previous years and, for the first time, the half dollar came to enjoy widespread use.

The Draped Bust portrait of Liberty may have resulted from the intercession of President George Washington himself. Its designer, portraitist Gilbert Stuart, is best known today for his head of Washington. Numismatic researcher R.W. Julian speculates that the president, being keenly interested in upgrading U.S. coinage, may have arranged for Stuart (whose work he much admired) to prepare this design.

It's said that Stuart's model was Mrs. William Bingham (nee Ann Willing), a Philadelphia socialite viewed by many contemporaries as the most beautiful woman of her day. Stuart's drawing was transferred to plaster by sculptor John Eckstein of Providence, Rhode Island, and Robert Scot, the Mint's Chief Engraver, executed the coinage dies.

In his highly acclaimed book Numismatic Art in America, Cornelius Vermeule characterized the Draped Bust version of Liberty as "a buxom Roman matron" and observed that "her full face has been endowed with a Roman dignity that recalls some massive marble bust of Minerva or Dea Roma, goddess of Rome and her empire ..."

Thirteen stars surround Miss Liberty on the Draped Bust/ heraldic eagle half dollar. This represents a refinement of the earlier Draped Bust coinage, on which the number of stars varied from 15 to 16, depending on the number of states in the Union at the time. Rather than subject this element of the design to continual change, Mint officials settled on a number reflecting the 13 original colonies. The word LIBERTY appears above the portrait and the date below.

Thirteen stars also appear on the coin's reverse, arrayed above the eagle. Chief Engraver Scot modeled the heraldic eagle after the one on the nation's Great Seal. Unaccountably, however, he reversed the positions of the arrows and olive branch held in the eagle's claws, placing the warlike arrows in the symbolically more important dexter (or right) claw and the olive branch of peace in the sinister (or left) claw, thereby contravening the Founding Fathers. A ribbon bearing the motto E PLURIBUS UNUM hangs from the beak, with UNITED STATES OF AMERICA around the upper rim. On the edge is the statement of value: FIFTY CENTS OR HALF A Dollar.

Draped Bust/small eagle half dollars had been struck in minuscule quantities, with a total two-year mintage of fewer than 4,000 pieces. By contrast, more than 1.6 million Draped Bust/heraldic eagle half dollars were minted over the years, with 1806 alone accounting for more than half that total: 839,576. The 1806 halves come in seven major varieties, including two overdates (6-over-5 and 6-over-inverted-6), three with a knobbed 6 in the date and two with a pointed 6. By far the rarest is the knobbed-6 variety on which the stem of the olive branch doesn't extend through the eagle's claw. There also are two 1803 varieties: with a small and large 3. The Mint made no half dollars dated 1804, but evidently dies had been prepared for that year, for some 1805 pieces are 5-over-4 overdates.

Despite their relatively high mintages, few Draped Bust/ heraldic eagle half dollars were preserved in pristine mint condition. There just weren't many collectors around in those early days and, in any event, 50 cents was a lot of money to set aside, representing a day's pay for many working-class Americans. Large numbers survived in high circulated grades because banks routinely held them for use in inter-institutional transactions. Weak strikes were common, further reducing the number of choice examples. Points to check for wear are the hair above Liberty's forehead and the eagle's breast feathers. Proofs were not struck for this series.

Draped Bust and Capped Bust half dollars both are widely collected by Overton die varieties. These are listed in the standard reference book Early Half Dollar Die Varieties 1794-1836 by Al C. Overton.

In 1807, Draped Bust halves gave way to a new version designed by Scot's assistant, John Reich. This was the Capped Bust type, on which Miss Liberty turned from facing right to facing left and tucked her newly curled hair inside a cap.

Draped Bust Half Dollars for Sale