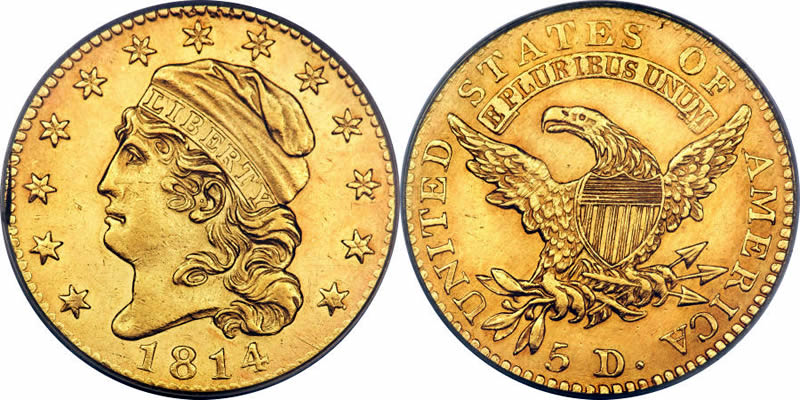 Ever since the 16th-century landings of Cortez in Mexico and the Pizarro Brothers in Peru, Central and South America have been continuously drained of precious metals. After the turn of the 19th-century, enormous new discoveries of silver on both continents fueled marked increases in mining and exportation and quickly lowered the worldwide price of silver in relation to gold. Unfortunately, the bimetallic standard adopted in the United States under the Coinage Act of 1792 established a 15:1 ratio between the metals, and by 1813, the ratio in Europe was 16:1 or more. All circulating U.S. gold coins became worth more than their face value in silver, and speculators and bullion dealers quickly caught on. Fifteen ounces of silver would buy one ounce of gold in the U.S., but that ounce of gold would bring sixteen ounces of silver in Paris or London, and the cycle could be continued ad infinitum, or at least until U.S. gold coins were no longer available. And that is precisely what happened.

By 1813, the half eagle was the only U.S. gold coin being produced. Eagle coinage ceased in 1804 and quarter eagles hadn't been minted since 1808. What little gold found its way to the Mint usually came from banks, and bankers generally preferred their bullion coined into half eagles. Although the "fives" were primarily used as reserves and for international payments, eventually the vast majority found their way into the melting pot.

The Capped Head Left half eagle series, minted from 1813 to 1834, suffered the most destruction from these melts. Made during the period when widespread melting took place, much of the mintage never saw circulation and commonly went straight from the Mint into bullion dealers' hands. Some forty-thousand pieces of "recent mintage" were destroyed in a single Paris melt in 1831. The small quantities that survived the melts before 1834 were decimated by the Mint's later recoinage of the old-tenor pieces.

Making its debut in 1813, John Reich's Capped Head Left design for the half eagle was copied by Chief Engraver Robert Scot in 1818 and extensively reworked by William Kneass in 1829. Reich modified his earlier Capped Bust design by eliminating the bosom and drapery of Liberty, leaving a large head as the central device, surrounded by thirteen stars with the date below. The reverse, only slightly altered from his 1807 design, depicts an eagle with widespread wings, clutching an olive branch and arrows. Surrounding the eagle are the inscriptions UNITED STATES OF AMERICA and 5 D., with the motto E PLURIBUS UNUM above the eagle's head. While Scot's 1818 revision was a crude copy of Reich's engraving, Kneass' 1829 modification was a distinct change. Diameters were reduced from 25 to 22.5 millimeters, the portrait appeared in higher relief, and a beaded border replaced the denticles of the previous coin.

When discussing this series, the word "rarity" loses its meaning. Although the Philadelphia Mint produced 1,385,612 business strikes and approximately 150 proofs over a 22 year period, there are no common dates. The 1813 is most often encountered, with many of the several hundred survivors probably saved as first-year-of-issue souvenirs. Beginning a list of rarities unique in U.S. coinage is the 1814, with only a few dozen pieces known. The following year produced one of numismatics' most celebrated coins, the low-mintage 1815, until this century considered the rarest date in the series. Only twelve pieces survive.

The 1818 and 1820 issues are occasionally available, with the latter date appearing more frequently. Coins of 1819 and 1821 are much more elusive. The 5D/50 variety of 1819, with only seven examples known, is rarer than the 1815 issue but has never achieved equal fame. Next is the legendary 1822 half eagle, perhaps the greatest rarity of all U.S. coins and one of the most famous. Only three specimens exist today, with two permanently impounded in the Smithsonian Institution. This coin last appeared at public auction in 1982, when it realized an astounding $687,500 in the famed "Eliasberg Sale."

In 1829, the transition was made to striking half eagles with a close collar, essentially a steel ring with vertical grooves inside. This innovation imparted a reeded edge to the finished coin and allowed smaller, standardized diameters. The new reduced size coins debuted with another landmark rarity, the 1829, an issue with perhaps 10 survivors in existence today. Two varieties followed in 1830 and 1831, with either large or small 5D, and approximately 75 examples are known of each date. A few dozen pieces exist for each year from 1832 through 1834, but only six specimens can be traced of the 1832 variety with twelve stars, making it rarer than the more ballyhooed 1815 and 1819 coins. Seeing little circulation, the majority of surviving coins are in grades ranging from XF to mint-state. Wear on this design first begins to show on Liberty's cap and hair, and on the eagle's wings and claws. Counterfeits are occasionally seen, including some crude 19th-century replicas of key dates.

With so many great rarities in the series, Capped Head Left half eagles are generally regarded as a type coin and even then are usually pursued only by advanced collectors. With the exception of Louis Eliasberg's holdings, almost all the great collections formed of this series were completed or at least started in the 19th century, most notably those of Stickney, Jenks, Steigerwalt, Dunham and Garrett.

In the summer of 1834, Congress passed legislation lowering both the weight and fineness of U.S. gold coins. More than a generation had passed since half eagles were seen in commerce, and the new, lighter weight Classic Head coins were readily accepted and widely circulated. Continuing melts of the old-tenor pieces made Capped Head Left half eagles the rarest series of Federal coinage, and today even a single example is often the highlight of many collections.