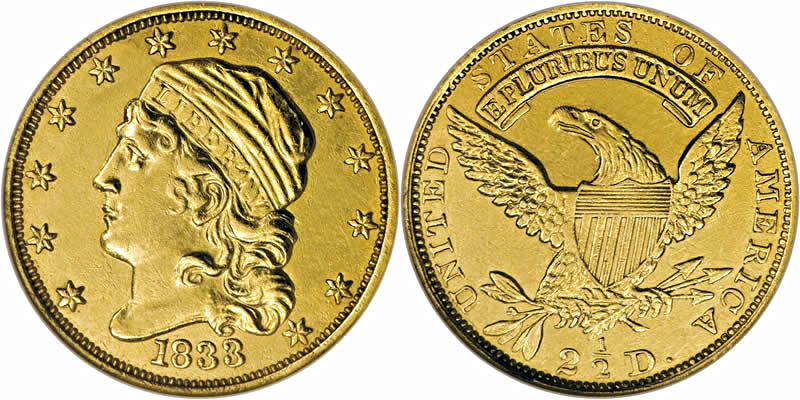 Early quarter eagles: Little seen by collectors today, they were almost as rare when first made. Few were minted and most never saw circulation. Napoleon's rampage through Europe had seen to that. A worldwide rise in gold prices, fueled by the chaos following the "Reign of Terror" in France, affected U.S. gold coinage disastrously. Bullion dealers bought U.S. gold coins, often with legal tender Mexican silver coins, and shipped them to Paris, London or Hamburg to be melted. The result was inevitable: Eagles were discontinued, half eagle mintage occurred almost exclusively for banks, and quarter eagle production remained minuscule, finally ceasing in 1808.

The War of 1812 only made things worse. The 15:1 silver/gold ratio established by Congress as "law of the land" in 1792, rose in Europe by 1813 to over 16:1, allowing bullion brokers substantial profits on every ounce of American gold exported. At the same time, Spain's preoccupation with Napoleon had allowed her colonies in Latin America to break free and establish Republics, and the huge flow of South America silver previously destined for Spain now flowed to the United States, further diluting silver's value vis-a-vis gold.

The promise of huge profits enticed exporters to risk fortunes and face innumerable hazards. Often, ships perished in storms, were ravaged by pirates, or the gold was hijacked once ashore. Profits could be great an ounce of silver or more per ounce of gold but large amounts of bullion were required to make the overseas voyage worthwhile. Many would still buck the odds, and soon nearly all U.S. gold coins disappeared from circulation. J. Laurence Laughlin, a Harvard assistant professor, in his 1892 book, The History of Bimetallism in the United States, described the Mint in this era as "a useless expense to the nation, but a source of profit to the money-brokers."

By 1821, relative calm had settled over world and national affairs. The war with England was long past, and the turmoil in Europe a distant memory. Indian wars in the Northwest were ended by William Henry Harrison and in the Southwest by Andrew Jackson. The "Great Migration West" had begun. James Monroe was inaugurated as President for his second term, running unopposed the previous December. The future was indeed bright for the growing nation.

For whatever reason (the late Walter Breen, a renowned numismatic researcher, speculated that they might have been used as Christmas presents or souvenirs), in 1821, quarter eagles were once again requested by several banks. Although gold didn't circulate during this era, bullion from Mexico, and later from the new mines in North Carolina and Georgia, did find its way to the Mint. Under the Mint's "free coinage" policy, anyone could deposit foreign coins, or native silver or gold bullion, and request coinage of specific legal denominations. Usually, gold deposits were made by banks, accounting for what little gold coinage there was at the time. Generally, banks requested the larger denomination, half eagles (eagle production ceased in 1804 by order of President Thomas Jefferson), so the sudden demand for quarter eagles was totally unexpected. Chief Engraver Robert Scot, seventy-seven and eyesight failing, was in no condition to create an original design. He responded with a design borrowed from his 1818 half eagle, itself an adaptation of former assistant John Reich's 1813 Capped Head Left motif.

Scot's matronly, thick-necked Liberty on the new 1821 quarter eagle wears a headdress in the guise of a Phrygian or Liberty cap, really a mobcap, typically worn by women around the turn of the 19th century. Thirteen widely spaced stars surround the bust, with the date below. An eagle with outstretched wings graces the reverse, and the motto, E PLURIBUS UNUM appears above. Both are surrounded by the legend UNITED STATES OF AMERICA and 2½ D.

The Capped Head Left quarter eagle maintained the legal weight standard, but was slightly smaller and thicker than the previous quarter eagle, Reich's 1808 Capped Head Left design, which had lasted only one year. In 1829, William Kneass, who had replaced Scot after his death in 1823, modified the coin by reducing the diameter further, punching in smaller stars on the obverse and redrawing the Liberty head and eagle. Kneass created a beaded border surrounded by a high, plain rim, taking advantage of a recent Mint innovation, the "close collar." Essentially a steel doughnut with a hole the size of the coin and grooves to impart a reeded edge, the close collar gave an even, finished look to the coin.

From 1821 through 1834, 42,065 business strikes and fewer than 150 proof Capped Head Left quarter eagles were made. Although numismatists recognize the 1821 through 1827 issues as a separate type from the later, smaller coins, the rarity of the entire series generally limits type collectors to just one example of this design. Collecting the eleven issues by date is a formidable challenge not attempted by many, as every issue is rare in any grade and some, like the low mintage 1826 and the 1834 are particularly so. The 1834 coin is almost legendary in its rarity, as the bulk of the mintage of 4000 pieces was never released, but melted at the Mint. None of the dates in the series appear in mint-state with any frequency, but type collectors will most often encounter the 1825 or 1829-31 coins in high grade. Most issues are usually found in grades from VF to Uncirculated, with more mint-state specimens among the later dates. Much of the proof mintage has disappeared, probably spent during the "Hard Times" era of 1837-44, and the few survivors are often impaired. When grading this design, look for wear on the hair above Liberty's forehead, on the top of her cap, and on her cheek. On the reverse, check the eagle's wing tips and claws.

Destruction of U.S. gold coins reached a pinnacle in 1831, when 40,000 half eagles were melted in Paris at once. Even U.S. banks were liquidating their coins. Finally, Congress was forced to address this decades-old problem. Responding to the pleas of Eastern businessmen and Southern mine owners, the legislators passed the Coinage Act of 1834, which reduced the gold content of U.S. gold coins by 6%, allowing them to circulate virtually for the first time. The new law ended the flow of gold out of the United States and enabled holders of the "old tenor" quarter eagles (now worth about $2.66) to sell their coins directly to the Mint instead of shipping them overseas.

The new weight standard called for a new design. Mint Director Samuel Moore instructed William Kneass to prepare enough dies to accommodate the expected demand for the new lighter weight coins. Kneass' 1834 Classic Head quarter eagle was easily identified by the missing motto on the reverse. It would be minted through 1839, when it was replaced by Christian Gobrecht's Coronet Head design.