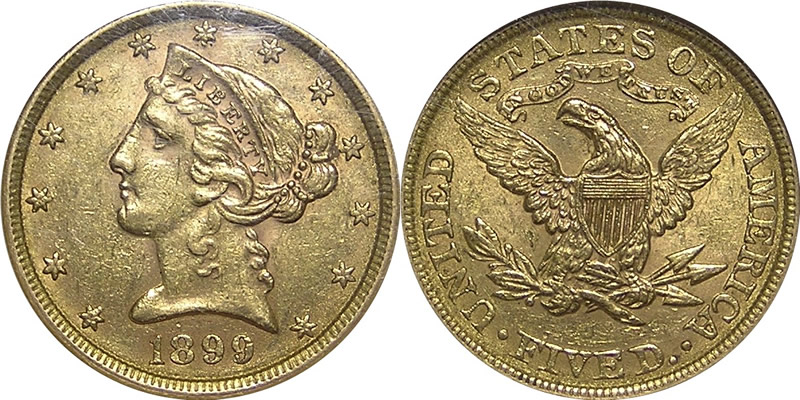 In the first half of the 19th century, America was increasingly at odds with itself. Here was the land of the free, a great democracy rooted in puritanical morality, yet with broad support for institutionalized slavery. This untenable contradiction would ultimately tear the country apart, culminating in the Civil War. The abolitionists' anti-slavery movement received much of its financial support from the donation of coins, offered every Sunday as personal sacrifices in churches all over the nation. It was only natural that, as an evil darkness descended upon the country in 1861, there was a public clamor to express faith in the deity on the nations' coinage.

After receiving instructions from Treasury Secretary Salmon P. Chase, mint officials experimented with several mottos. After a succession of patterns in various metals and denominations were struck using mottos such as "God Our Trust" and "God And Our Country", the adopted motto IN GOD WE TRUST was first placed upon the new two-cent piece of 1864.

The brutal Civil War finally ended with Lee's surrender to Grant at Appomattox Court House. The first part of the national drama had ended, but just five days later on April 14, 1865, President Abraham Lincoln was tragically assassinated. Lincoln's violent death deepened the scars left by the deaths of a million young men and reinforced the need for a collective prayer of hope and thanksgiving for the era of Reconstruction. Recognizing the depth of public sentiment over the suffering all had shared, Congress passed the Act of March 3, 1865, authorizing the motto to appear "on all coins able to accommodate it."

The $5 gold half eagle was familiar in American economic life. It had been in constant use since the early days of the Republic and was one of the longest lasting denominations in United States history. Half eagles would go on to see almost continuous production from 1795 to 1929, and throughout their life, they would not only be used in trade but - in preference to almost any other gold coin - would be popularly found in Christmas stockings, especially in eastern towns and cities.

The contemporary half eagle coin minted since 1839 and in use at the end of the war had been designed by Mint Engraver Christian Gobrecht. Gobrecht's Coronet Liberty was a modified version of the John Reich / William Kneass "Classic Head" that had been in production since 1834. Liberty is depicted as thinner and more delicate than on the previous version. She is wearing a tiara engraved with the inscription LIBERTY and her hair is tied in a bun with a string of beads. Thirteen stars surround the bust with the date positioned below. The reverse shows an eagle with outstretched wings, Union shield on its breast, perched on an olive branch and holding three arrows in its left claw. The inscription UNITED STATES OF AMERICA and the denomination FIVE D. encircle the eagle just inside the beaded border. In 1866, Gobrecht's successor as Chief Engraver, James B. Longacre, added the new motto IN GOD WE TRUST to a scroll placed above the eagle's head.

In the years following the motto's debut on the half eagle, the suspension of specie payments initiated during the war continued, precluding the need for large mintages of gold coins. Half eagles were made in relatively small numbers and hoarded along with the previous issues. When specie payments resumed in 1878, the half eagles were a convenient coin to redeem the large number of greenbacks still in circulation. By 1880 huge quantities were being made. More than 51,500,000 regular issue Coronet half eagles with motto were minted between 1866 and 1908, with the majority produced during the last 25 years or so of the design's life. Only 2,938 proofs were made, with annual mintages ranging from 20 to 50 pieces in the early years, to as many as 230 pieces in 1900.

The mintage was large enough so that almost every date after 1878 is available, many in gem condition. Although most type collectors seek just one example each of the "no motto" and "with motto" types, a very popular collection is a set of Coronet half eagles from every mint. All would be "with motto" except the issues from the three southern mints, which generally would be "no motto" coins minted before the Civil War. The Coronet half eagle is unique in this respect, as it is the only coin struck at all seven mints - Philadelphia (no mintmark), Charlotte (C), Dahlonega (D), New Orleans (O), San Francisco (S), Carson City (CC) and Denver (D). Mint marks can be found beneath the eagle.

Collecting the entire series of Coronet half eagles with motto by date and mintmark is a daunting task since there are so many "holy grail" rarities prior to 1878. Every single date of this period is rare, with the exception of the relatively high mintage 1873 Philadelphia issue. Only several pieces exist of many dates in any grade, and some issues are simply unknown in Mint State. Complete collections of Coronet half eagles didn't exist in the 19th century as collectors in that era collected by date only, ignoring the small letters identifying the mint's location. It wasn't until Augustus G. Heaton, President of the American Numismatic Association, published his famous monograph on branch mints in 1893, that collecting by mint mark became popular. Because of the lack of interest in mintmarks, many coins were not saved at the time of issue. Consequently, many early branch mint issues are not found in grades above VF.

Some well-known early 20th century numismatists astutely realized that many of the 19th century gold issues were rare and sought these coins for their collections. A few of these individuals were able to complete the series or obtain at least some of the rarities. Among these famous collectors were banker Louis Eliasberg, William Cutler Atwater, the movie actor Adolph Menjou, King Farouk of Egypt and pharmaceutical giant Josiah K. Lilly.

When grading this series, check for signs of wear on the hair above the eyebrow to the top of the coronet. Check also the hair strands on the very top of Liberty's head and on the ringlets of hair just above the neckline. Look for wear on the wing tips, claws and neck of the eagle. The ribbon and motto don't exhibit evidence of wear until the coin is worn to the grade of Very Fine.

In 1908, the Coronet half eagle gave way to the Indian Head design of Bela Lyon Pratt, fulfilling President Theodore Roosevelt's dream of a artistic national coinage. The new half eagle not only continued the use of the motto IN GOD WE TRUST, but incorporated the earlier motto E PLURIBUS UNUM as well.

Gold Liberty Head With Motto Half Eagles on eBay