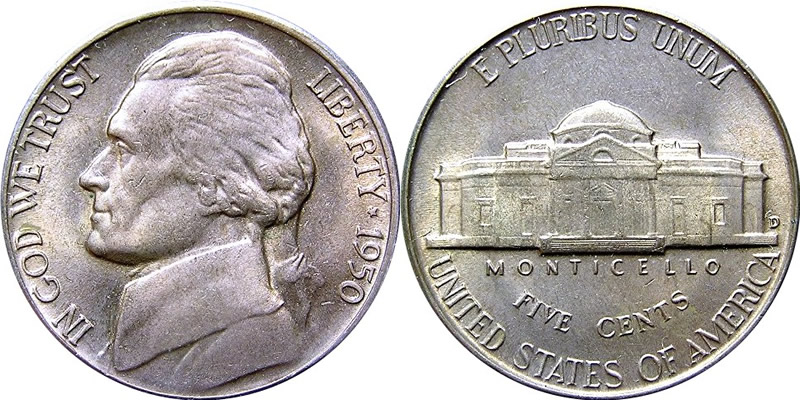 Still in production today, the Jefferson Nickel has become a familiar coin to generations of Americans. Introduced in 1938, it is the only one of our current coins being made in its original composition, though this continuity was interrupted briefly by the emergency of World War II. After more than six decades of minting, this humble coin continues to honor the nation's third president.

Thomas Jefferson was a man of countless talents, and he possessed an unceasingly curious nature. His achievements in architecture (his own home, Monticello, being but one example), combined with his triumphs as a statesman, scientist and philosopher, have earned for Jefferson a lasting legacy as one of the truly great figures in American history. It was seemingly inevitable that once George Washington had been honored with a circulating coin in 1932, Jefferson could not be far behind in achieving such recognition.

Thomas Jefferson was born in 1743 in Virginia, in what was then Goochland (now Albemarle) County. Raised in a prosperous home, he took full advantage of the educational opportunities this offered him. Though he was proud to describe himself as merely a gentleman farmer, he began a long and illustrious career of public service in 1769 by joining the Virginia House of Burgesses. The onset of the American War of Independence six years later found him a member of the Second Continental Congress. In this capacity he became the principal author of the Declaration of Independence. Returning to Virginia to serve as its governor during the closing years of the war, he later rejoined the Continental Congress for the term 1783-84.

Among the most pressing issues of the day was settlement of the nation's war debt and the establishment of a monetary system. Jefferson devised a decimal coinage system, the principal points of which were ultimately adopted some years later. Jefferson then became America's minister to France in 1785, returning home upon the election of George Washington as the first president of the federal republic. Jefferson's term as secretary of state found him often at odds with the dominant Federalist party, and this only intensified during his vice-presidency under President John Adams (1797-1801).

A Republican, Jefferson succeeded Adams, serving two terms as president of the USA (1801-09). Highlights of his presidency included the Louisiana Purchase of 1803 and America's battles against the Barbary pirates. Retirement for Jefferson was anything but quiet, and among his achievements were the founding of the University of Virginia and the design of its buildings. He maintained a lively and stimulating correspondence with figures around the world, until death claimed him at his beloved home of Monticello in 1826. In a remarkable coincidence, his passing fell on July 4, fifty years to the day after the signing of the Declaration of Independence. In an even greater twist, old rival John Adams also succumbed on that very same day.

Early in 1938, the Treasury Department announced a public competition for designs to replace those of the current five-cent piece. No reason was given for retiring James Earle Fraser's Indian Head/Buffalo Nickel, but that design had achieved its statutory minimum production of 25 years, and therefore no legal obstacle stood in the way of replacing it. The new coin would honor Thomas Jefferson, and the competition rules specified that its obverse was to feature "an authentic portrait" of the third president. The rules further required that the reverse of the coin depict "a representation of Monticello, Jefferson's historic home near Charlottesville."

The contest was open to anyone who could deliver models that would work within the Mint's technical requirements, and these specifications were provided in the public announcement. Of some 390 models submitted, those of German-American sculptor Felix Schlag were selected, and he was awarded the $1000 prize in April of 1938.

Felix Schlag's portrait of Jefferson was based on a marble bust sketched from life by famed French sculptor Jean-Antoine Houdon. Schlag's dramatic perspective view of Monticello was rejected by the Federal Commission of Fine Arts, which acted in an advisory capacity on all matters of public art. In addition to recommending a more conventional, elevation view of Jefferson's home, the commission suggested that Schlag's stylized, Art Deco lettering be replaced with a more traditional Roman script. Schlag complied with its requests, submitting revised models for review in July of 1938. After a few more changes were made to the lettering, principally enlargement of the value FIVE CENTS, the models were approved. With all of these delays, production of the new coins did not commence until September, and the first examples were released to circulation two months later.

The Jefferson Nickel features a left-facing bust of the president, dressed in a coat of the period and wearing a peruke wig. Arranged in arcs around the border are the motto IN GOD WE TRUST to the left, with LIBERTY and the date to the right, separated by a single star. On the reverse is a front elevation view of Jefferson's home, with the name MONTICELLO beneath it. Around the border are the legends E PLURIBUS UNUM above and UNITED STATES OF AMERICA below. Beneath MONTICELLO is the value FIVE CENTS. Beginning in 1966, Schlag's initials FS appear below the truncation of Jefferson's bust.

The mints at Philadelphia (no mintmark until 1980), Denver (mintmark ‘D') and San Francisco (‘S') each coined Jefferson Nickels from 1938 onward. Mintmarks appeared to the right of Monticello through 1964, when their use was suspended due to a nationwide coin shortage. Mintmarks were restored beginning in 1968, though since that date they have been placed beneath the date, to the right of Jefferson's peruke. San Francisco suspended coining operations after 1954, but Jefferson's bearing the popular ‘S' mintmark were again made for circulation in 1968, 1969 and 1970. Beginning in 1971 and continuing to the present day, San Francisco has struck only proof examples for collectors.

Mintages from all three mints have varied over the course of the series, with some of these figures being small by modern standards. The dates considered "key" coins due to their low mintages include 1938-D, 1938-S, 1939-D, 1939-S and 1950-D. None are truly rare, however, as the Jefferson Nickel series coincides with the era in which Americans preserved rolls and even entire bags of uncirculated coins of each and every date. Instead of date rarity, the focus in collecting Jeffersons is on superb quality. Until the late 1980s, when lowering of this coin's relief resulted in consistently sharp strikes, most Jefferson Nickels were seldom found with all details distinct. Specifically, the steps of Monticello are typically incomplete, and coins having "full steps" receive intense collector interest.

The novelty of the Jefferson Nickel caused most examples to be saved by a curious public during its first few years, and coins of this type did not become a familiar sight in circulation until about 1940. Shortly thereafter, the onset of World War II prompted the rationing of many commodities, certain metals among them. Nickel was highly valued for use in armor plating, and Congress ordered the removal of this metal from the five-cent piece, effective October 8, 1942. From that date, and lasting through the end of 1945, five-cent pieces bore the regular design but were minted from an alloy of copper, silver and manganese. It was anticipated that these emergency coins would be withdrawn from circulation after the war, so a prominent distinguishing feature was added. Coins from all three mints bore very large mintmarks above the dome of Monticello, and the letter ‘P' was used as a mintmark for the first time on a U. S. coin. These "war nickels" proved quite satisfactory in circulation, and they were not immediately withdrawn. Instead, they remained a familiar sight until the mid-1960s, when rising silver prices caused them to be hoarded for their bullion value.

While a handsome coin in its own right, the Jefferson Nickel serves an additional purpose in honoring a truly great American. In this role, it is likely to continue for many years to come. For collectors, completion of the Jefferson series remains an inexpensive and attainable goal.